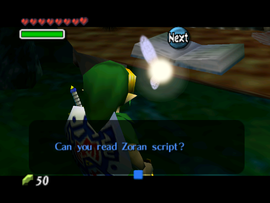 Zoran is a writing form used by the Zora. The only examples of documents written using this system can be found in Zora Hall in Great Bay.

If Link attempts to read Lulu's Diary or Mikau's Diary while in his human form, Tatl will point out that he can't read Zoran Script.[1] While in his Zora form, however, Link gains the physical abilities of a Zora, including the ability to read their writing. A similar phenomenon occurs when Link tries to read the unfamiliar inscriptions on Darmani's grave, but he can decipher the language by taking his Goron form.