Zora Hall is a location in Majora's Mask.[1]

The Hall is the home of the aquatic Zora race in Termina. Situated in the waters of Zora Cape in Great Bay, Zora Hall consists of vast caverns filled with pools and waterfalls. The entire complex is subterranean, much like Zora's Domain from Ocarina of Time. Zora Hall is also the home of the popular Zora Band, The Indigo-Go's.[2]

There are many chambers inside Zora Hall, including a room for each of the band members, a shop, and a few others. While here, Link can learn much about the condition that has befallen Lulu, as well as the cause behind the ocean's abnormal weather. The only way to enter the band members' rooms and acquire this information, however, is as Zora Link.[3] To the west of the Zora Hall is an entrance that leads to the Zora Cape, which is where Lulu spends most of her time standing idly and gazing at the sea.[4]

The rehearsal stage, shaped like a giant seashell, rests in the center of Zora Hall's main chamber. Six golden torches line the front of the stage, and a large coral pool fills the floor area just before them. Preparations for the band's rehearsal are taking place around the stage area: Link can use Fire Arrows to light two torches that act as the second floor's seating lights to illuminate the stage,[5] and help a Zora adjust the volume of the sound system by playing the Zora Guitar while in Zora form.[6]

The area behind the stage is veiled by four waterfalls and is where the four rooms for the band members, each guarded by a Zora who will turn away fans, are located. 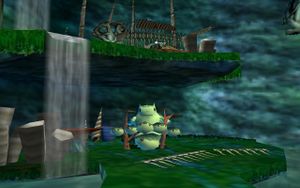 The room shared by Mikau, the band's guitarist, and Tijo, the drummer, is behind the door with three seashells above it.[7]

The room is split into two levels: the lower level, where Tijo resides, and an upper level only accessible by ladder, which is Mikau's practice area. The ladder was broken when Tijo tried to climb it, however, so Link can only access it using his Hookshot.[8] A waterfall spills from the ceiling and empties into a pool beneath the floor level.

Tijo's practice area is decorated with a variety of large shells, a modest table and seat, and Tijo's drum set. Mikau's practice area consists of his desk and the skeletal remains of large fishes. He keeps a Sea Urchin, his diary, a pearl in an oyster shell, and a dead lure fish which he uses as a lamp on his desk. If Link reads Mikau's diary while in Zora form, he can learn two four-note riffs which can be played with Japas, the bassist, in a Jam Session. This song can be taken to Evan and played for him as Link to redeem a Piece of Heart.

Tijo plays the cave theme from A Link to the Past on his drums. 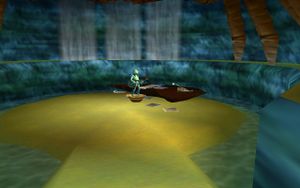 The room of Japas, the band's bassist, is behind the door with a squid above it.[9] His room is little more than a sandbar surrounded by waterfalls and a shallow pool. He stands on a seat beside his desk on the sandbar, which is covered with sheet music and a lure fish as a lamp. The ceiling is support by the remains of a giant crab.

After reading Mikau's Diary, Link can use the notes he learns to play a Jam Session here with Japas.

Japas plays the dungeon theme from The Legend of Zelda on his bass. 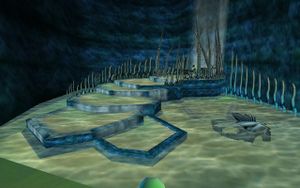 The room of Evan, the bandleader and songwriter, is behind the door with red corals above it.[10]

His room consists of a series of large steps leading to the main platform, where he stands playing his piano, surrounded by the skeletal remains of some large aquatic creature. A waterfall streams down behind the piano and down the platforms, flooding most of the room. Whenever Link enters his room, he is playing the game over theme from The Legend of Zelda on his piano. If Link speaks to him as Mikau, Evan will ask about his efforts concerning the Zora Eggs and give him advice about where to get more empty Bottles.[11] He will only dismiss Link, though.[12]

After completing the Jam Session with Japas, Link can play the resulting sixteen note song for Evan and receive a Piece of Heart for his trouble. If he plays the song as Mikau, however, Evan will reject the composition.[13] 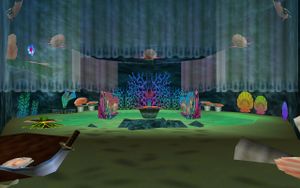 The room of Lulu, the band's singer, is behind the door with the star fish above it. Lulu is never seen in her room during the three days Link is there, so besides a Business Scrub who is willing to trade items, there are no inhabitants. The room is filled with colorful corals, cloth, tables, couches, and wall-hangings made of seashells, and water features. She had a desk with a lure fish lamp on it, but it was cut in two when the Gerudo Pirates attacked her,[14] and is still severed by a Gerudo's sword. On a seat opposite the desk, Lulu's Diary can be read while in Zora form.

A Piece of Heart rests on a shelf just out of Link's reach. He can access it with the Deku Flower in the room if he trades a Title Deed with the Deku Scrub there, who will vacate via a dark hole in the ceiling.

The Zora Shop, located near Zora Hall's submerged exit, stocks Arrows, Red Potions, and a Shield. It appears to be built around the remaining wreckage of a large ship, and possibly its cargo.