Zora is a character featured in the A Link to the Past comic by Shotaro Ishinomori. Residing in the Dark World version of Zora's Lake, he is a Zola who has befriended Epheremelda the fairy. 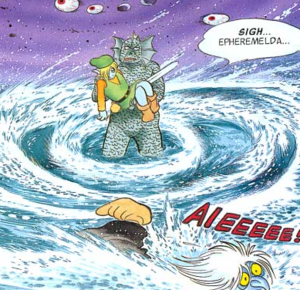 After Link rescues Epheremelda from a gang of monsters who were chasing her, she takes him to Zora's Lake, where he encounters a Zola. Thinking it to be a monster, the young hero tries to fight it, but the Zola instead thanks Link for having saved Epheremelda, his fairy.[1] The Zola explains that he thought he was Roam, the knight who, with the Master Sword, scarred his forehead.[2] The creature then introduces itself as Zora, and he and Epheremelda tell Link the story about the ruler of the Dark World and the usurper of the Triforce, Ganon..[3] Zora then tells Link that one of the maidens is imprisoned in the Palace of Darkness nearby; however, he warns the young hero of the explosive materials, known as firecorn, that are kept in there.[4] Link decides to go anyway, for he insists that he must rescue the maiden trapped in the crystal.[5] Before leaving, Zora allows Link to take Epheremelda as a guide and grants him the Zora's Mask to disguise himself and not look so conspicuous as he is sneaking around the palace.[6]

Later on in the comic, after Epheremelda indignantly leaves Link's side,[7] the young hero becomes trapped in Misery Mire and is about to be eaten by Vitreous when a whirlpool appears and engulfs both Vitreous and the Wizzrobe. From beneath, Zora rises to rescue Link. When the young hero asks Zora how he arrived and who told him where he was,[8] Zora explains that Epheremelda had requested that he go rescue Link and that he is able to warp anywhere due to the presence of water.[9]