Zelda Wiki:Zelda and the Middle Ages

Some play The Legend of Zelda looking for stress relief. Some play for the thrill of completing those tricky dungeons. Some play to beat the daylight out of each evil Keese, Stalfos, and Poe that crosses their path. But I bet many of the gamers new and old to The Legend of Zelda have never truly realized the scope of what they are playing, the cultural background of their quest, or why Link wears that strange green tunic all the time. The Legend of Zelda is not just a story, but a mixture of stories from the past that transcends the simple rise and decline of an evil king. By looking at stories, myths, and culture, we shall explore how precise The Legend of Zelda functions in the era of the Middle Ages.

In comparison to Hyrule, novels such as T.H. White's Once and Future King truly capture the picture and feel of the European Middle Ages, when looking from a royal perspective. The novel illuminates King Arthur's reign atop Camelot, his mighty castle, and his expansive conquest into the unknown around him. Like Hyrule, Arthur's empire encompassed forests, mountains, rivers, and deserts, all governed from the central, populated hub at Camelot. With Arthur at the helm and Lady Guinevere, his queen at his side, he ruled a sentient kingdom, in quite the similar way the land of Hyrule is overseen by its King and Princess Zelda herself, at his right hand. Camelot is a grand castle, and like Hyrule, even boasts a bustling courtyard town, of which the majority of the realm's inhabitants live. Back in 13th and 14th centuries, especially in England, but also seen in the Roman Empire, and across the reaches of early France, the majority of Europe's population either lived rurally, subsisting off of their own wares, or in clustered cities similar to Castle Town. 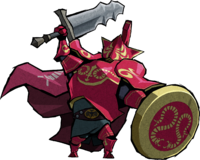 Darknuts may be reminiscent of Knights of the Middle Ages.

The Lon Lon Ranch region of Ocarina of Time is a prime example of such rural living, as their business and subsistence comes from the raising of horses, one of the most popular replacements of human labor back in the Middle Ages.

However, the grand castles and population lifestyle are not the only connections that the Zelda series has to the era of the Middle Ages; the series' use of era-type weapons and transportation add to the overall 'old-fashioned' feel of the Zelda franchise, as well.

Seen early on, Link doesn't receive a gun and a bullet-proof vest upon entering battle, a commonplace defense in today's world, however, he is given a dinky sword and wooden shield to defend himself with. In an era before gunpowder and explosive projectile propulsion, the grand majority of skirmishes operated under physical terms, meaning that the use of blunt objects and melee weapons were the popular choices when it came to hand-to-hand combat. Working under a Middle Ages license, Link does not stray too far from the barbaric, physical image that accompanies war during this time period. His trusty sword is often his go-to weapon when it comes to situations against impregnable enemies, such as Darknuts or Moblins, which are exaggerated caricatures of Middle Ages opponents in themselves, as they too wield swords and spears. As far as projectile weapons go, Bows, Slingshots, and the useful Hookshot are all incarnations of Middle Age battle items, the last of which is a modification of the cunning Grappling Hook, an item that even makes an appearance in its true form in The Wind Waker. Going along with the popular Renaissance sea explorations of Vasco de Gama, Magellan, and the like, maps and compasses remain vital to general and oversea navigation, prevalent in The Wind Waker and within the majority of dungeons throughout the Zelda games. The GPS of today is nowhere to be found. And we can't forget Link's shield, the primary individualistic defense of the age, considering the shields' impregnability to simple rocks, arrows, and even blades that any opponent may throw. 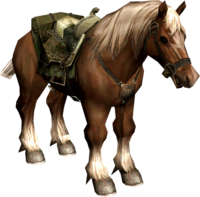 Horses are the primary transport of the time.

The archaic story of the Sword in the Stone, elaborates quite well on a certain weapon that lives close to the heart of every Zelda title: the Blade of Evil's Bane. Of course, it's manifestation in the Sword in the Stone legend is Excalibur, the blade of King Arthur, of which he pulled from its pedestal back when we was known as the young Wart. Wart's relinquishing of Excalibur was a great calamity to the castle town of Camelot, as he was the only one able to do so, despite his apparent lack of strength in comparison to others in the town. Such destiny famously befalls Link, when it comes to pulling the legendary Master Sword from the Pedestal of Time. Because Link embodies the Triforce of Courage, the mark of a hero only the Master Sword will recognize, Link is able to pull the sword and use it. Both swords, along with their masters, have supernatural power to destroy evil, and because their owners either are or embody forces of good, only they would be eligible to draw the blade from its rest in the first place. The sword is a distinguished symbol of royalty and of the castle's reputation, in both instances.

The Zelda series also lends itself well to the Middle Ages in terms of transportation. The quintessential transport of any Zelda game is Link's faithful horse, Epona. In an era without cars, horses did everything. Their strength and their speed came in handy not only in working the crop fields, but most importantly in long-distance travel. Because it was a literal jack-of-all-trades, the horse became the most influential labor object of the age, even aiding in wartime in the transfer of supplies and in the fast retreat of a failing regiment. Twilight Princess showcases the horse's prized attributes well, in the scene where Link helps Ilia and Telma transport an injured Ralis to Kakariko Village for hospitalization. Not only does Link use Epona to guide the horse-drawn carriage that holds the sick Zora Prince, but he maintains her respect as a fast animal by escaping enemy projectiles and fighting against those hog-riding Bokoblins at the same time.

Going along with the theme and cultural background of the Middle Ages, several comparable stories and myths may have attributed to the creation of the Zelda world and its characters, as a function of the world they live in. By looking at Hyrule and its intricacies, the connection to the popular era-based stories of Robin Hood and Peter Pan appear alive and glowing in several aspects of the Zelda universe, the most prevalent of which exist through Link's character. 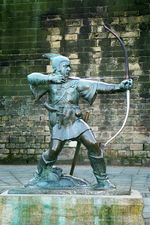 The myth of Robin Hood is one that walks close to Link: the man exists as an accomplished archer and revolutionary in a 15th century English society governed by cruel kings and sheriffs who feast off of their own selfish motives. In a direct tie to Link, Hood grows up and lives in Sherwood Forest in England, along with his group of “Merry Men”, those tied to him physically and in spirit. Link's upbringing in Ocarina of Time deep inside the Kokiri Forest alongside the Kokiri suggests quite the resemblance. Robin Hood, though he is a known outlaw, revolts against these nasty royal forces in the name of good, and commonly rescues those in the way of such oppression, whether it is the famous English princess Maid Marian or innocent commoners. In his most alleged victory, he rescues the princess from the clutches of the Sheriff of Nottingham, in an archetypal strife of good versus evil similar to that of Link and Zelda versus Ganon in the grand majority of the Zelda titles.

Robin Hood incorporates his prized weapon, the bow and arrow, into all aspects of his revolutionary career, often with his “steal from the rich, give to the poor” motif in mind. For the most part, the bow and arrow is the dungeon item in the Zelda series that is most frequently used outside the particular dungeon it was found, not only because it is a common item in the games, but because I feel it completes Link's look; the only other item that achieves this is the Master Sword and its complementary shield, possibly because these items are the most frequently pictured in official game art and design in respect to Link.

J.M. Barrie's Peter Pan, the dream of a Renaissance world where pirates and young, un-aging beings are all that exist, runs akin to Robin Hood in several aspects of the Zelda universe, but provides twists of its own when it comes to Link's physicality and companionship.

Peter Pan is known as the “boy who wouldn't grow up” - throughout the entire story, Pan remains exactly the same age; and it's not just Peter who remains timeless, all the inhabitants of his far-off world, Neverland, simply don't age. Immediately, the Kokiri of Ocarina of Time come to mind. Not only does Peter dress in a green tunic and wield a small dagger like Child Link, but even when transferring between child and adult eras in Ocarina, the Kokiri look the same as if time had stopped entirely. And it's not just the Kokiri and their forest that bear relationship to Barrie's Neverland; Pan's world is cluttered with Zelda-comparable races: the Gerudo as pirates, the Zora as mermaids, fairies, and even the Kokiri as the Lost Boys. Even the famed struggle in Peter Pan mirrors that of Zelda: Peter, the hero figure, must face the pirate Captain Hook, and rescue his partner, the human girl, Wendy, in order to return peace to his land.

On a different note, Peter Pan's friendship with Tinkerbell is a vital choice that ends up saving his life in several situations, most involving close encounters with death based off impulse judgment. Companion fairies like Navi of Ocarina of Time, Tatl of Majora's Mask, and Ciela of Phantom Hourglass work in the same fashion, warning Link of upcoming danger and keeping him on a positive path through his journeys, working with his best interests at heart in order to maintain his life. Peter Pan's relationship with another force, however, is a driving point of interest for all fans of the Zelda series, but most importantly in The Adventure of Link: his shadow. Peter Pan quarrels with his shadow very time it separates from him, and because his shadow is a mirror image, it uses identical movements to keep Peter from attaching him back to his body. Dark Link is the Zelda reincarnation of Peter's shadow - Link must fight his “dark side”, his equal, in order to move on, or even beat a game, as seen in The Adventure of Link. Battles with Dark Link are so cumbersome because he uses Link's own moves against him, however, in the end, the shadow submits, like Peter's, to the real and true form.

By looking at the Zelda series in the light of the Middle Ages, one can truly appreciate the cultural and physical background laid as a foundation to such a great video game empire. Not only does the series operate accurately in respect to the actual traditions of the era, but it keeps history alive by encouraging young gamers to delve into a world of the past, a world that may not have been so “historical” then, but one that is famously known across the world today as The Legend of Zelda.