The Origins of the Lens, Mask and Stone 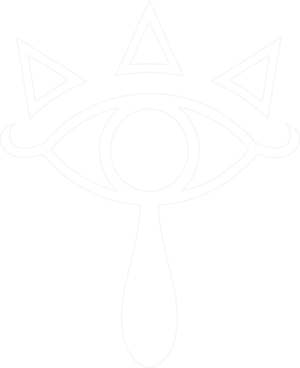 The hallowed symbol of the Shiekah.

According to legend, a man who could “see the truth” once lived in a house where the Well is today. The concept of “sight” and “truth” has been terminally linked with Kakariko Village since its inception, boasting its likeness on the symbol of those long ago who built the town itself: the Sheikah. The Sheikah symbol, a convictive eye with three triangle-spokes above and a teardrop below, is littered all over Kakariko legend and is present on the clothing of its one and only ancestor, the Shadow Sage, Impa, and Zelda, after disguising herself as Sheik. Interestingly, this symbol has made its way onto objects as well – not just any objects, however, but three relics that transcend the boundary of normal thought, sight, and instinct. To any normal passerby, these objects look like Halloween accessories, and who wouldn’t want a purple magnifying glass, a strangely-shaped rock, and a funny mask to accompany their already scary Halloween costume?

This was the probable premise the Sheikah based the creation of the Lens of Truth, the Stone of Agony, and the Mask of Truth on: to enable future generations to use their powers to the extent these objects were created for, in a “time capsule” sort of way. This is where the Well comes in: as the “Well of Three Features”, it leads me to believe that these three Sheikah relics were at one time housed at the Bottom of the Well, possibly even created by the truth-seeing man that once lived over the spot, as these objects “see” different types of “truth”. By the time Ocarina of Time elapses, only the Lens remains at the Bottom of the Well – perhaps the Happy Mask Salesman believed in the Sheikah legend and claimed the Mask of Truth for himself? The Stone of Agony is given as a gift by the cursed in the Skulltula House – perhaps they were placed under the Skulltula curse because they stole the Stone from the Well? Since the Well is “dark, narrow, and scary” it is apparent that only people who knew of its legend and its treasures went down there; it seems unlikely that any normal passerby would have stumbled into its depths and went as far to retrieve either of these two relics.

The Three Relics Create a “Trinity of Truth”

The Sheikah tribe, at least Impa, was famous for their grasp of superpower: their ability to “see” through fake walls as noted in the Shadow Temple and the Well, which were created with such power in mind, and their ability to vanish before the eye, as Impa does as she is given missions by Princess Zelda in Ocarina of Time. This magician-like power was transferred from the Sheikah Tribe to these objects, each of which inhabit different facet of these ancient traits. The Triforce itself is a mythological relationship between power, wisdom, and courage, as are these relics, but have a relationship under more “earthly terms”, possibly created to mirror the likeness of the Triforce without godly connotations.

The Lens of Truth is, simply, a magnifying glass that can “see” through walls, chests, and even detect ghosts. Its functionality gives the normal user “absolute sight” – he is not only able to see what is real, but can see what is not readily picked up by the normal eye. In fact, the Lens of Truth itself is shaped like the Sheikah mascot: an eye, denoting true sight literally and symbolically. In this Trinity of Truth, the Lens is most akin to the Triforce of Power, which embodies a user with mystical authority and strength of all kinds. For many people, “seeing is believing” and to believe in something is to give it power and strength – the same principle the Lens operates under – Link doesn’t have to blindly “see to believe”, he acts on the Lens, and at that point knows the reality of what is in front of him.

The Mask of Truth, as the second relic, is a silver mask engraved with the Sheikah symbol that has the power of telepathy over Gossip Stones in Ocarina of Time. Because of this, the user retains the capacity to take in valuable information and rhetoric from these stones, helping them on their quest, and possibly through everyday tasks their comrades struggle through with more effort than needed. The amassing of this extra, beneficial information through mind control connects the Mask of Truth with the Triforce of Wisdom, which prides the sixth sense as one of its powers.

The Stone of Agony is a mythical Kakariko rock that rumbles in reaction to nearby hidden drop-holes, hollow walls, and other secrets across the land of Hyrule. By using this sacred stone, the user can “see” the pitfalls of nature: keeping the user not only alive, but aware of their surroundings, with the Sheikah power of “absolute instinct”. The Stone of Agony lays akin to the Triforce of Courage in the Trinity of Truth due to its gutsy approach to seeking out and destroying the concept of the “leap of faith” and the “blind shot”, making all uncertainties known, and keeping them that way. Where the Triforce of Courage emphasizes protection of its holder, the Stone works in just the same fashion.

The trinity of the Lens, the Mask, and the Stone represent the highest amount of perceptive godliness a common being may achieve while living about Hyrule, considering they were not chosen as an embodiment of the actual Triforce or any of its pieces. The Sheikah symbol itself incorporates three triangular spokes above the eye which I believe symbolizes not only the Triforce fragments, but a manifestation of these three relics by extension, and their powerful influence on Sheikah culture. Using the three relics at once would make the user frankly insusceptible to sabotage, mind control, and secret keeping, a few traits even Triforce holders do not receive; the user would be able to see all different kinds of “truth”. The connection of the three powers are akin to the Triforce in that they all work optimally when separate, but when together, their godly connotations make their earthly constraints appear holy, in the amount and capacity of extra power they give to the common being.