In both Ocarina of Time and Twilight Princess, the population of Zoras as well as the entirety of Zora’s Domain becomes completely encased in ice. Despite the fact that the Zoras are frozen solid, they are revived once the ice has melted without any obvious adverse effects from their icy enclosure. Most living organisms die when exposed to freezing temperatures over extended periods of time. Once the core body temperature drops below the required temperature for normal metabolism and bodily functions, it is impossible to survive. Freezing has been proven effective at preserving tissues and cells, as demonstrated by cryogenics, but without the proper treatment, ice crystals form within the body, destroying cells and damaging internal organs. There are cases in nature where certain animals are able to survive at subzero temperatures due to unique anti-freeze properties found naturally or produced inside their bodies.

One example of this is the wood frog [1], which can withstand temperatures of -4 degrees C for 11 days by ceasing bodily functions such as breathing and blood flow. [1] Due to specialized proteins and glucose that prevent intracellular freezing and dehydration, as much as 65% of the frog's body may freeze during the winter and when it thaws the frog comes back to life. Similar to other northern frogs that hibernate in the winter, the wood frog also accumulates urea in bodily tissues which acts as a cryoprotectant to reduce formation of ice crystals and cellular dehydration. These specialized frogs also assume a ‘water-holding’ position by crouching with the limbs drawn close to the body and the digits tucked under, which helps prevent evaporate water loss. Any other ill-equipped animal would die under freezing conditions.

There are several ways in which different species can cope with the hazards of being frozen. Certain living organisms survive in sub zero climates by evolving to respond to the factors that contribute to an individual’s death when frozen. 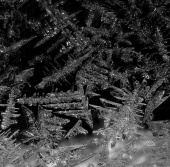 An example of ice crystals that can form inside an individual's body.

The formation of ice crystals [2] inside the body is a serious danger when exposed to freezing temperatures. The expansion of ice inside blood vessels and other spaces causes physical damage to tissues. When ice crystals form outside the cell, the expansion of these extracellular crystals increasingly limits the amount of space available for cells to take up, causing damaging deformation. Intracellular ice formation is almost instantly fatal to cells. One response to this danger found in insects is to synthesize cryoprotectants [2] such as polyors and sugars which reduce the lethal freezing point of the body. [3] Since a body cannot survive when the core temperature drops below the temperature required for normal bodily functions, many freeze tolerant and freeze avoidant species produce such cryoprotectants. While polyors like sorbitol, mannitol, and ethylene glycol can also be found inside the bodies of such creatures, glycerol is the most common.

Another danger caused by ice crystals is dehydration. [4] The formation of ice crystals in extracellular fluid causes movement of water out of cells through a process called osmosis. Dehydration is dangerous to cells and can cause the cell to draw water from its own interior, shrinking and causing harm. Some freeze tolerant and freeze avoidant species possess high concentrations of solutes such as glycerol [3]. Glycerol attracts water molecules, shifting the osmotic balance and holding water in the cells. Cryoprotectants like glycerol reduce cellular dehydration and the amount of ice that forms outside of cells.

Anti-freeze proteins [5] (AFPs) refer to a class of polypeptides, short polymers formed from the linking of a-mino acids, that are produced by certain vertebrates, fungi, plants, insects, and bacteria that allow their survival in subzero environments. AFPs cling to small ice crystals, inhibiting the growth of ice and stabilizing cell membranes to protect against damage by ice that would otherwise be fatal. Species containing AFPs can be classified into two groups, freeze avoidant and freeze tolerant. [6] Freeze avoidant species are able to prevent their bodily fluids from freezing altogether, while freeze tolerant species are able to survive their body fluids freezing.

Hibernating insects which may freeze during winter produce thermal hysteresis factors [7](THFs), a seasonal timing mechanism responsive to the length of day or night and responsible for increasing anti-freeze protein levels. AFPs reach their highest levels during winter, corresponding with the shortening daylight hours.

Humans do not have a high tolerance to freezing temperatures. Hypothermia [4] occurs when core body temperature drops below 95 degrees Fahrenheit. [8] When body temperature drops below 82 degrees F, severe hypothermia [9] takes place, in which major organs fail, cellular metabolic processes cease, and clinical death occurs. If a human were frozen solid, they would die, even though their tissues would resist decay and become preserved, but not without being damaged in the process of freezing. 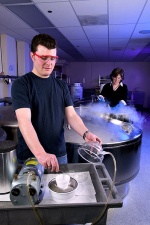 Cryopreservation of plants with tank of liquid nitrogen in the background.

Cryopreservation [5] can be used to preserve cells, tissues, or entire bodies with the use of subzero temperatures. [10] If cryoprotectant solutions are not applied, the tissues and cells would suffer the same damage from ice crystals and other dangerous aspects of freezing as would any other animal. After being properly prepared for freezing and reaching the frozen stage, the preserved material is relatively safe from further damage and estimates suggest a maximum storage period of 1000 years. [11] Different types of tissues and cells have been successfully cryopreserved [12] and once thawed, still usable, but there is currently no successful methods to thawing a human body once it has been cryopreserved. 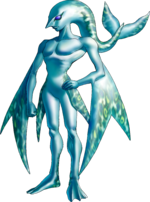 Human embryos have been proven to survive 10 years under well-controlled laboratory environments at -196 degrees Celsius, [13] and cryopreservation has been applied to procedures such as in vitro fertilization [6].

Zoras may use any or all of the above mentioned methods in order to survive freezing. All of these are real ways in which different species have evolved to withstand subzero temperatures, whether to survive the winter or preserve cells and tissues. It would be impossible for the Zoras to thaw out and still be alive if they did not have a means of protecting their body from irreversible and fatal damage that is a result of being frozen.