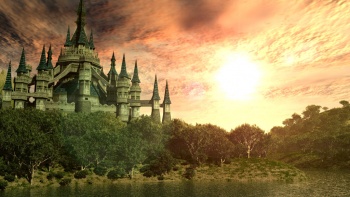 In the future, Link may be the one to cause the downfall of Hyrule.

Imagine Link facing Ganondorf in the center of Hyrule Field. The Castle is visible against the stark, stormy night, a white beacon of tradition rising from the foothills of the landscape. The night is alone. Ganondorf has the unconscious Princess Zelda on the ground below him. “The Hero of Time stands before me,” says Ganondorf, “as tragic as ever, torn between two equal evils – tell me, Link, would you rather spare your precious princess and the royal bloodline at the expense of Castle Town or have me kill the princess, and tell my minions placed strategically about the village to scatter. You decide. If you cannot choose, they both will die. ”

A Link that faces a life-shattering dilemma such as this would surely rock the Zelda franchise, and lend itself to a title darker than even the sinister, impeding disaster that evolves out of Majora’s Mask. For titles now, Ganon has been defeated in a relatively simple and linear manner: hit the dungeons, muster up the courage with the alliance of the sages, maidens, wise ones, etc. and destroy him. However, this consistent defeat seems not to have deterred him much; he has returned to terrorize Hyrule in numerous games past the original Legend of Zelda. However, in a twist of fate, Link would finally have something larger to defeat than an overweight former-Hyrule conqueror: he’d be at an intrinsic war with himself.

No longer will the forces of Ganon impede Link’s path after such a challenge, Link would have to make the death-defying choice of saving Princess Zelda or Castle Town. It’s not about fighting Ganon, Vaati, Bellum, Nightmare, or Agahnim anymore; if anything, Link’s dark side will reveal itself. And in the end, after choosing a path, Link will fight and subsequently defeat Ganon like he always had, but yet he will always be labeled as the “Hero” who killed the Princess or the “Hero” who pulled the plug on the many innocent civilians of Hyrule’s only Hylian population, in this scenario. An unpopular hero.

What Does This Mean for Zelda?

However, I don’t think Nintendo has the moral strength to pull a title of this magnitude off, despite the fresh thought-provoking and philosophic ideas it would bring to the Zelda franchise. First, all the games thus far, though some have a darker theme, fail at empowering the villain with strength enough to actually challenge Link, and by extension, Zelda. Despite the fact that these battles are often two against one, they aren’t “ultimate boss battles” by any measure. Remember fighting Majora at the end of Majora’s Mask? With the Fierce Deity’s Mask, that battle was ridiculously easy, and even without it, Majora was so stocky and clumsy that Link could beat him just by avoiding his attacks, striking at the right times without even losing any hearts. All of Ganon’s incarnations, especially the fights at the end of Ocarina of Time, The Wind Waker, and Twilight Princess that had the Evil King separate battle segments, surely retained the “epic” factor, but still came off as too easy, linear, and predictable. Don’t get me wrong, these games were amazing; however, they would’ve been so much more so if they incorporated a Ganon that actually posed a legitimate psychological threat to Link, instead of so much of a physical one. 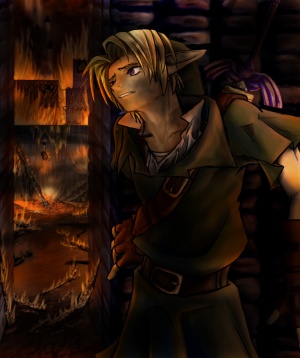 There may be a Zelda title in which Link will watch Castle Town burn for the sake of its sovereign.

A Ganon that poses Link a dilemma-like choice such as the one above will not only be the Ganon that the Zelda series deserves, but the one it needs, as well. The game would depart from a linear path to the destruction of Ganon to a path towards the destruction of Link, and would, in essence, make the bad guy out of Link, regardless if Ganon committed the acts or not.

Could Zelda Withstand a Tragic Link?

Secondly, the Zelda series might not be able to handle the burden of a tragic Link, especially since the entire series promotes such a light-filled, determined hero. The closest the series gets to a Link with warring inner demons is in Twilight Princess, where Link is symbolized as one of the Dark Interlopers in a cut scene describing the nature and origin of the Fused Shadow. Though a symbolic representation, we see early on the possibilities of such a personal war within Link, and how serious it could make not only the title itself, but the subsequent titles that follow. However, Link is not the only one to fall in this situation: perhaps he decides to spare Zelda at the expanse of Castle Town – Zelda’s credibility as a ruler would plummet too as the other races of Hyrule begin to notice the apparent annihilation of her own race for such a selfish motive – to save the life and bloodline of its sovereign. The other way around, with the death of Zelda, the land of Hyrule would be without a legitimate heir, encouraging anarchy as the other races vie for the top spot similar to the way they did back in the first Unification War. Thus the impact on the series would be shattering, and would function in such a way that any Link to follow must live in the gargantuan shadow of the Fallen Link, possibly never to rise again to the title “Hero” set by his godly precedents.

Third, the absence of a third heroic, “save both”, choice is enough to tear the series apart, as partially explained by the paragraph above. If anything, Link is allotted many chances to defeat the villain and save the day, the most prevalent of which in Majora’s Mask, as Link is able to travel back to the First Day as he pleases in case he needs more time to complete dungeons or acquire items necessary to defeat the evil at the end. While there is a fixed timescale in Majora’s Mask, Link can manipulate that as he wants in order to successfully overcome Majora and win the game: very linear, and very obvious. In the Four Swords series and Ocarina of Time especially, but also in the majority of Zelda titles, the evil simply seems to wait for the hero to face him or help him achieve his goals, and does not provoke him further until the time comes to fight him: again, linear, and easy to take one’s time with.

When Link is presented with a problem such as this one, there is no middle choice – he cannot kill Ganon to save the day, because the day cannot be saved. And he cannot take his time, because Ganon posed him an ultimatum: one or nothing. This time, the villain wins regardless of his defeat.

Could Zelda Handle the Victory of the Villain?

What are the implications of this choice for the "Hero of Time"?

The most serious question of them all: Can the Zelda series handle a villain succeeding? The human tradition is in the creation of stories that have naturally happy endings and in the case that one cannot be achieved, sequels are planned so that the eventual forces of good can overcome that of evil. The same applies to the Zelda franchise – say one game ends with an ending such as this one: not only does the Zelda team have a storyline foundation to base future games off of, there are a much larger field of possibility when it comes down to how the future hero may redeem his rightful name. Instead of a thinly connected time line present in the majority of Zelda games, we now have a definite theme, reason, and motive for a direct sequel.

All in all, I believe that the Zelda franchise would greatly benefit from a psychologically-tested hero, one that not only is forced to make impossible decisions, but one that can be redeemed in a gratifying, meaningful way, that brings new light to the Zelda series as a whole. And honestly, we can only save Hyrule from evil so many times before dark forces legitimately begin to take matters into their own hands, after losing consistently to the same tactics, the same powers, and the same hero.