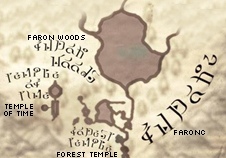 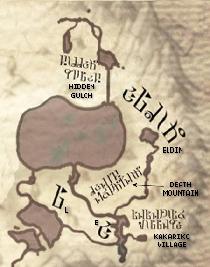 The four Light Spirits were created by the Goddesses to protect the sacred land of Hyrule.[1] By the events of Twilight Princess, Hyrule is carved up into three provinces, and each of the provinces exists under the overseership of one Light Spirit. Faron presides over the Forest Region,[2] safeguarding important locations connected to worship, such as the Forest Temple and Temple of Time, and the Divine Relic, the Master Sword. Eldin keeps watch over the Mountainous Region,[3] where the Gorons and people of Kakariko make their residence, the seat of the Goron Mines, which serve as the Goron's holy ground.[4] Lanayru is watchman of Hyrule's waterways, including Zora's Domain, Zora's River, and Lake Hylia, where a regularly visited shrine to the Light Spirit is located.[5][6] The Zora people and the Lakebed Temple, sacred place of the Zora,[7] rest in Lanayru's care. These three Spirits, and by extension the provinces in their charge, each represent an important, recurring natural aspect of Hyrule - Forest, Fire, and Water. These elements have been incorporated into Divine Relics throughout Hyrule's history, each specifically tied to the Goddess it most embodies (see the Spiritual Stone of the Forest, also known as the Kokiri's Emerald, the Spiritual Stone of Fire, also known as the Goron's Ruby, and the Spiritual Stone of Water, also known as the Zora's Sapphire. Additionally, see Din's Pearl, Farore's Pearl, and Nayru's Pearl). This is in agreement with each Spirit's name containing all, or part of, the name of the Goddess symbolized by their respective elements - Eldin, Faron, and Lanayru.

According to Lanayru, when Interlopers who excelled at magic appeared in Hyrule and tried to establish dominion over the Sacred Realm, the Goddesses order the three Light Spirits to intervene.[8] Some attribute Ordona's absence in the story to an oversight by the game creators (which, given strong evidence to the contrary throughout the game, is highly unlikely), or claim that Ordona may not have been created at that time. It is far more likely that Ordona was not called to intervene because Ordona does not protect the physical land of Hyrule at all.

Unlike the other three Spirits, which are bound to Hyrule itself, Ordona exists in a neighboring province.[9]

This begs the questions - Why the Fourth Spirit? Why did the Goddesses choose to appoint a spirit to watch over a people outside of Hyrule? The answer appears after further scrutiny.

The Bridge connecting Ordona to Faron

Ordona Province is located outside of Hyrule, to the south.[9][10] Ordona makes the distinction between its province and the land of Hyrule apparent when it says that Zant covered the entire Kingdom in Twilight (and Ordona was never shrouded in Twilight).[11] It's peopled with Humans who live in an agricultural society, and is separated from Hyrule by a large canyon. The Triforce is not pictured in any Ordonian architecture, and neither are any other recognizable Hylian symbols, further distinguishing the province from Hyrule. Link's house does have a banner hanging over the threshold of a tree inside a golden triangle; however, though it is similar to the Triforce, it does not appear to be a direct reference. There are no relics gifted to Ordona of divine origin and no locations of any spiritual significance. Ordona Province, as explorable in the game, consists of Ordon Village, Ordon Woods, and the Ordon Spring. Ordon Village seems to have but one connection to Hyrule's destiny, and it appears it's this one connection that the Goddesses deemed worthy of their divine protection - The Chosen Hero.[12]

In Twilight Princess, Link is the only Hylian in Ordona. His birthparents are never spoken of, leaving room for speculation as to how many generations of his family (of which, apparently, only he is left) made their residence in Ordona. Each family in Ordona (except for Fado's) has their own banner, and each is different, but none contain any recognizable Spiritual or Hylian symbols; the fact that Link's bears slight semblance to the Triforce may be an indication of his Hylian heritage. Though Link's history is mysterious, there are signs that he was bound to be the Chosen Hero from birth, which, given the Hero's indissolvable ties to Hyrule's fate, would merit divine favor for the entire province.

Upon Link's sword hand (his left hand, in the original version) is the mark of the sacred Triforce, symbol of the gods, proof that he is blessed by the Goddesses.[13][14]

Unlike others, who lose their physical forms when shrouded in Twilight, Link takes on the form of a beast; Faron says this is a sign.[15] Additionally, Midna's people had "long believed that the Hero would appear as a divine beast."[16]

The Ancient Hero, thought by many to be the legendary Hero from Ocarina of Time, instructs Link in the ways of the sword. He tells him that only those from the bloodline of the Hero can learn these hidden techniques,[17] which indicates - and he even states this explicitly on one occasion - that they are of the same bloodline.[18][19][20] 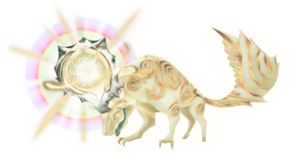 This evidence would seem to indicate that long before Link ever set foot in Hyrule, he was destined to be the one to protect it. Through divine foretelling, it is probable that the Goddesses foresaw the Hero emerging from the small province of Ordona. What may have befallen Ordona without the protection of the Light Spirit is uncertain; perhaps the Goddesses saw some impending danger, or knew that a time would come where the ones who carried the Hero's blood and lived in Ordona would need divine strength. In light of this knowledge, they deemed it worthy of protection and appointed the Fourth Light Spirit as Guardian to ensure the safety of the unborn Hero. Ordona's duties, therefore, would not include ridding the land of Hyrule of evils, hence its absence in the banishing of the Interlopers. Its true commission was only to look after the bloodline through which Link would eventually appear and see to it that his lineage was not interrupted.

Though not screening the physical land of Hyrule, Ordona does protect the one capable of saving it.