Stalfos (July 7, 2007)
I'm incredibly sorry that this data was lost. There are, so far, three votes for this article, but my memory only serves to remember two of them: Hisak and Adam. However, I do know there was one last vote - Zebra something I believe? You all have no need to vote again. Once more, I'm sorry that this was deleted! --Jase 12:33, 3 June 2007 (PDT)

Now that all the votes have been properly signed, I make that 10 votes. Stafos is now the first user-nominated featured article on ZW.org! --Adam 01:20, 7 July 2007 (PDT)

ZeldaInformer (August 1, 2007)
Zelda Informer, a promising new Zelda site that was released this monday (16.7.07). The project is organized by a group of ex-Zelda Universe members that eventually grew tired of ZU and decided to create a better site. The site content will be produced almost entirely by a group of Zelda theorists, originally formed over at Zelda Universe, called The Bombers. --Uncle Meat 7:20, 17 July 2007 (PDT)
Lake Hylia (October 2, 2007)
Given that the article has recently been greatly extended, and that Lake Hylia is a frequently recurring location in many games in the series, I think it may be time that a place/location became our featured article. --Adam 12:15, 14 July 2007 (PDT)

OK, well I nominated it based on Jason's comments on the talk page; since the revision he was talking about, it seems to have had all the necessary improvements. I agree that the Minish Cap section needs more than just the quotes, I'll see what I can do. But I'm not sure if the Great Moblin should be given it's own page as a boss (bearing in mind I haven't played the Oracle games, but from the text in the article it seems he doesn't fight Link like a regular boss). --Adam 02:36, 17 October 2007 (EDT)

Opposition
Midna (June 12, 2008)
We must be doing something right here. This is one of the most viewed articles on ZeldaWiki.org. It is well-written, has plenty of sources, good formatting, and is quite thorough. A great choice.--Matt 02:29, 1 June 2008 (UTC)

Opposition
Master Sword (June 17, 2008)
With the nomination of the Pedestal of Time recently, the Master Sword must be the next logical step. A well-written article that cites sources, and the majority of its pictures are simply beautiful. --Yuvorias 9:24, 15 April 2008 (EST)

Opposition
Darknut (August 30, 2008)
This is a very detailed article. It also happens to be one of our most-viewed articles on the wiki. The article also has many references. That is not an easy thing to do with such a common enemy. It is well-organized. There are several images of good quality throughout the page. It is a great article. Time to make it featured.User:Matt/sig 07:03, July 22, 2008 (UTC)

Opposition
Veran (November 24, 2008)
A little known boss among the majority of Zelda players here. Likely three or four of us have actually fought her. Her article is in much better shape than Onox's article. It fits the criteria. Update: Plus, it'd be the first featured media of the Oracles games! --Felicia's Champion 04:08, 15 October 2008 (UTC)

Opposition
Goron (March 12, 2009)
And the prize for most improved article goes to...


The improvement in this article, even in as little as the last 3 months, is admirable and a credit to the hard work of all who've contributed. It's gone from a stub with an article about Gorons in TP sandwiched in the middle, to a well-rounded article which meets all of the above criteria. A fine example of what we can all achieve! —Adam [ talk ] 20:00, 8 January 2009 (UTC)

{{hide|header=Warping (April 30, 2009)|content= Finally a lengthy page not concerning characters or games. Informative and concise enough to be a resource for all of the series applicable titles. Interesting to read and get the whole picture of the function as gaming progressed. As a bonus, it could serve as an example of what other articles spanning throughout the series could be.Axiomist (talk) 04:29, 17 March 2009 (UTC)

Although it was mostly written by one single member, this page has become an article to be proud of. Excellent writing skills detailing every single appearance of the Sacred Realm, well-placed pictures that go along with the section involved, and it's got sources to back up almost every single statement. Truly an outstanding article. Dany36 20:59, 13 June 2009 (UTC)

The article is really well written, especially for being mostly a single users work. However, something that annoys me, and it annoys me really overall at ZW, is the quotes and references. As I mentioned here: http://www.zeldawiki.org/Talk:Sacred_Realm I feel that quotes that are referenced in the article should simply be in the article, not at the bottom creating more work for the reader. The article references them many times. The best example I can give is when The Great Deku Tree says blah blah... your interpreting for the reader what the GDT said instead of just quoting me what he said. It would cut out usless sentences of explaining it and replace it with quotes. As a reader, it's annoying you are making me do extra work and interpreting quotes for me. Nathanial Rumphol-Janc 07:38, 22 October 2009 (UTC)

I understand what you are saying, but that's how all articles are on the wiki, that's not anything unique. And all it takes is a simple click of the mouse to go straight to the quote, that's why we put the link in the text. And as far as interpreting it, that's for people who may not understand the actual quote or may misunderstand its meaning. There's really no way to change those things, those are given for any article on the entire wiki. We're actually making less work for readers I would have thought by helping them understand what the quotes mean and by not making a mess of the main text by putting them in the references section where they are a simple mouse-click away. Link87 15:14, 22 October 2009 (UTC)

I am well aware that's how all articles are done, and I find it too annoying. This place isn't for that discussion - I suggest taking it to that pages talk page where I brought it up. Nathanial Rumphol-Janc 16:24, 22 October 2009 (UTC)

This is about the article's merit though, not about precedents. I respect that you don't like the reference precedent, but that has nothing to do with this article's merit. Link87 18:09, 22 October 2009 (UTC)

I don't think a featured article needs to necessarily be 100% perfect. It can have some work that might still need to be done, but there is nothing objectively wrong with this page at all. --Xizor 23:40, 30 October 2009 (UTC)

Yes and no Xizor. To me if were going to feature something, it should be as close to perfect as it can be, don't you agree? You wont "feature" a section of your site unless it is close to perfection, right? Same case as I view articles. Nathanial Rumphol-Janc 09:17, 14 November 2009 (UTC)

No article, or anything for that matter, is going to be 100% perfect Nathan. This is about as close as it gets, and to expect it to be absolutely perfect is unreasonable. Link87 16:46, 14 November 2009 (UTC) 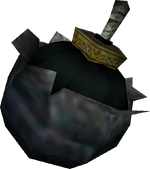 Not so long ago, this article was an embarrassment to Zelda Wiki. It was nothing but an unorganized mess. Axiomist asked me one day if I could improve it, so I've worked hard to take what I know about bombs, and what others knew that I did not, and I built this article up to meet the standards for a featured article. It is informative, to the point, has appropriate images, and has tons of references. I took it pretty seriously. I believe that this article, along with any others about themes and subjects that have endured throughout the Zelda series, is very important to the Wiki, and it would be nice to see others in the shape it's in now. I've had plenty of help putting it together, so it's mostly rock solid. The enemy lists at the bottom of the page are a little arrangement I came up with and Axiomist organized to be tidier. Lists like these will show up on other item pages, so consider this a ground-breaker. Noble Wrot 20:41, 22 November 2009 (UTC)

# I don't know. I think it could use some sections on the games, and not just the kinds of bombs. I once tried to do that for the article, but then I lost everything and didn't bothered to try it again. Though I do suppose it's been improved a bit, I think it's needs more. The Goron Moron 07:51, 23 November 2009 (UTC)

With the work of the Zelda Wiki community, this article has become a well written, and informative page. Quite an accomplishment to everyone who contributed.User:Mandi/sig 04:28, 19 March 2009 (UTC)

One notable aspect of Zelda Wiki is our method of placing similar content from varying games into fewer articles. Fishing is an article representing that, our inclusion of references, relevant images, cross referencing related pages, up-to-date info, and despite having brief how-to sections; the article never seems dominated by with a guidish style. Fishing is certainly worthy of being the standard for all other mini-game articles to follow. Axiomist (talk) 06:14, 30 October 2009 (UTC)

#yay! i love fishing! ...er, i mean feature this article. its cool. 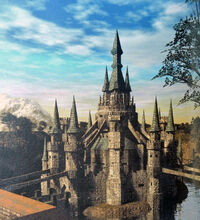 A staple of just about any Zelda game, always beautiful, the article is no exception. It covers all the appearances of the castle. It goes into detail but doesn't go so far as to dull you out halfway through. You're engaged in reading it the whole way. And the ample supply of images makes it easier on the eyes to get through the whole thing. It, of course, has a lot of references to support it, making it that much better. Also, a rare treat, the gallery at the bottom has many beautiful views of various incarnations of the castle.User:Matt/sig 02:33, February 16, 2011 (UTC)

Like most of the major weapons and items in the series, the Four Sword page has received an outstanding article. With amazing amounts of information, great image usage and plenty of references, I for one say this page is now worthy of featuring.—ZENOX T C 11:01, 21 November 2010 (EST)

I expected less when I went to this article. I was surprised with the amount of detail it has. It's not the largest article, but it doesn't need to be. It is large enough to describe the village wonderfully and it has plenty of essential references. Reading it certainly stirs many memories.User:Matt/sig 02:33, February 16, 2011 (UTC)

This is one of the first towns that you actually go to in one of the most famous Zelda games so i defiantly think it should be fetured --Fudgehog15 19:17, 28 August 2011 (EDT) 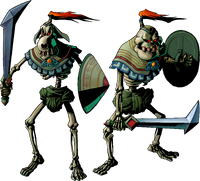 I know it's not the longest of articles, but the little information we have about Ikana Kingdom and its history has been gathered neatly in a well-written article. It has plenty of sources with the information that the game has scattered about this somewhat mysterious kingdom, and although it has some theory along with it, it is not too far-fetched. --Dany36 15:27, 15 April 2012 (EDT) 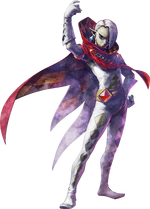