It has been suggested that the portion of this page concerning Twilight Bow should be made into its own page. Should the target page already exist, this content should be merged into it where appropriate. Discuss this on article's talk page.

Zelda's Bow[1] is a recurring weapon in The Legend of Zelda series. In games such as The Wind Waker, Princess Zelda mainly uses a Bow with the Light Arrows to help Link fight Ganon.

Princess Zelda from The Wind Waker is the first Zelda in the series who fights along Link's side in his battle against Ganondorf. She does not have her own Bow, but uses Link's Bow and Light Arrows to cover Link.[2] During the battle, however, Ganondorf hovers over to Zelda and knocks her unconscious, but after a while, she wakes up and aids Link once again by aiming a Light Arrow at Link's Mirror Shield, which bounces off to Ganondorf and allows Link to deal the final blow.

Zelda with her Bow in Twilight Princess

In Twilight Princess, after Zelda calls upon the Light Spirits to aid her in defeating Ganondorf, she obtains the Light Arrows and a Bow with which to wield them.[1] Zelda uses the Bow to aid Link in the horseback part of their battle against Ganondorf. By shooting the Light Arrows from her Bow, Zelda can stun Ganondorf, giving Link a chance to strike.

Since the princess is not seen with anything to carry the Arrows in, it is assumed that the special Bow actually produces the Light Arrows instead of it requiring ammunition.

Like in The Wind Waker, Princess Zelda in Spirit Tracks does not have her own Bow, but she uses Link's Bow of Light during his battle against Malladus. By tapping the Bow button in the touch screen, Princess Zelda can be controlled in order to shoot a Light Arrow at Malladus's back.

Princess Zelda's bow from Twilight Princess may be obtained in this game, by scanning Princess Zelda's Super Smash Bros. series amiibo. It has a low chance of spawning and can only spawn after having completed one Divine Beast. The Twilight Bow fires Light Arrows, which are unlimited in supply until the bow breaks. Light Arrows have the same power as a normal arrow. Arrows fired from the bow shoot entirely straight with virtually unlimited effective range. The bow has 30 power and 100 durability.

Zelda using a Bow in the animated series

In The Legend of Zelda TV series loosely based on the first Zelda game, the princess often accompanies Link on his adventures and is seen being quite skilled in the use of a Bow, which seems to be her weapon of choice since she uses it in most of her battles. The Bows used by Zelda fires beam-like arrows instead of the usual arrows. Interestingly, Zelda is capable of making the Bow magically appear in her hands instead of having to take it out from her pocket.

Zelda is first seen skillfully wielding a Bow in "The Ringer", where Link gives her a Bow dropped by a Stalfos so that she may help him fight off a horde of Stalfos that have surrounded them.[3] In "Cold Spells", the young hero once again gives the princess a Bow, which she uses to defeat various magically-possessed buckets and blankets. Zelda uses the Bow later on in the episode to shoot an arrow at Ganon, seemingly weakening him and allowing Link to deliver the final blow. Zelda is last seen wielding a Bow in "Sing for the Unicorn" that she uses to defeat an Armos that had grabbed Link.

Other than the Bow, Zelda also seems to be fond of using the Crossbow and is seen using it twice in the animated series.

Zelda is once again seen skillfully wielding the Bow in Captain N: The Game Master. The princess carries this Bow wherever she goes, as she can make this Bow magically appear in her hands, much like the Zelda animated series. Most of the enemies that Zelda encounters in the show can easily be defeated with just one arrow from her Bow. In "Quest for the Potion of Power" and "Once Upon a Time Machine", Zelda uses a golden Bow capable of shooting beam-like arrows; however, in "The Trojan Dragon", she wields a blue Bow that shoots regular arrows instead. 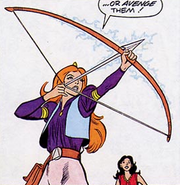 Zelda using her Bow in the comic

In the The Legend of Zelda comics by Valiant Comics, Zelda is portrayed as a proficient archer much like her animated series counterpart.[4] Although the princess at one point fights using a sword and shield, she confesses that she prefers the Bow since she is unable to fire a sword beam correctly.[5] When wielding a Bow, Zelda never misses her target and is capable of easily defeating enemies with it,[4] as seen in To the First Power where she defeats a Gohma and later a Wizzrobe with a single shot.

Zelda is next seen using her Bow in Queen of Hearts, when she goes to help Link and Queen Seline fight off a horde of enemies. She appears and shoots an arrow at a magic container being guarded by a Wizzrobe,[6] breaking it and restoring Seline's powers. In Day of the Triforce, Zelda wields her trusty weapon to defeat Ganon's minions that have attacked the Water Town of Saria. In this story, Zelda is shown to be capable of making her Bow magically appear in her hands, similar to the animated series.

Being Princess Zelda's main weapon of choice, she uses the Bow to defeat any enemies she encounters during her adventures and prefers using it over her dagger.

Throughout her adventure in The Crystal Trap, Zelda often uses the Bow to defeat a variety of enemies, from Tektites to Gibdos and even Octoroks.[7] In the final battle against Ganon, Zelda fires an arrow at the evil wizard to pin his robe to a trunk, allowing Link to hurl the Spear at his hand and eventually defeat him.[8]

The only times Zelda uses her dagger instead of the Bow is when she has run out of arrows or she's fighting an enemy that is immune to arrows, such as the Boomerang Demons.[9] Other than that, the Bow proves to be an invaluable weapon in the course of her journey, often times saving her from various dangerous situations, such as when she defeated Madame Grusha's army of Moblins.[10]

Zelda's Bow appears as a weapon in Hyrule Warriors. It can be summoned as part of Zelda's combos and special attacks while wielding her rapiers. Tetra is capable of doing the same in Hyrule Warriors Legends as her Special Attack when in Focus Spirit mode.