Zant's Helmet,(BotW | HW)[1][name reference missing] also known as the Usurper King's Helmet,(BotW)[2] is a recurring item in The Legend of Zelda series.

Zant's Helmet is a piece of Armor introduced in the "EX Treasure: Usurper King" Side Quest from The Champions' Ballad DLC pack. It is a priceless relic that was once kept safely within the walls of Hyrule Castle, but was later stolen by Misko. Misko hints at the whereabouts of Zant's Helmet in Misko's EX Journal 2 in the Deya Village Ruins,[3] claiming that it rests among dead Trees in Tobio's Hollow.[4] The metallic Treasure Chest containing Zant's Helmet can be found between two dead Trees in the middle of a Bottomless Bog in Tobio's Hollow. In order to retrieve it, Link must use the Magnesis Rune to pull it from the ground.

When worn, Zant's Helmet grants Link the Unfreezable bonus, preventing Link from being frozen. However, Link will still take damage from exposure to frigid environments and freezing water even while wearing Zant's Helmet. It cannot be enhanced by a Great Fairy, nor can it be Dyed at the Kochi Dye Shop in Hateno Village.

Zant's Helmet is said to be much like the Helmet that Zant wore in the Era of Twilight.[5] After initially finding Zant's Helmet, Link can purchase more from Granté in Tarrey Town for 50 Rupees. 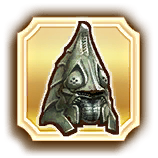