From Zelda Wiki, the Zelda encyclopedia
(Redirected from Wizzrobes)
Jump to: navigation, search

This article is about the recurring enemies. For the Bosses, see Wizzrobe (Boss).

Wizzrobes are recurring Enemies in The Legend of Zelda series.[1][2][note 1]

Wizzrobes are undead wizards that cast beams of magical energy,[4] and are so named because of the cloaks they often wear. While the appearance of Wizzrobes has differed in some games, in all their appearances, they possess the ability to vanish and teleport elsewhere, enabling them to engage Link through ambushes and surprise attacks. Wizzrobe (Boss) have also appeared as Bosses or Sub-Bosses in certain games.

Wizzrobes appear inside Dungeons in The Legend of Zelda. They are encountered in Level 6 and Level 9. In the Second Quest, they also appear in Level 5 in addition to the other two. They resemble humanoids whose faces are entirely hidden in shadow by their hoods.

Wizzrobes come in two colors, both with drastically different behaviors. Orange Wizzrobes teleport throughout the room, while shooting magical bolts at Link, before disappearing again. Blue Wizzrobes are a much stronger variant that take more hits to defeat, and attack by moving across the area while casting spells. They will occasionally vanish to swiftly change direction to another area. These Wizzrobes are far more dangerous than the weaker orange variety, especially in cramped rooms where Link can quickly become surrounded by them. Both of their magic can be blocked with the Magical Shield. They can be dispatched with the Sword; however, due to their nature of teleporting across the area, it is easier to attack them from a distance, such as shooting Sword Beams at them. When defeated, red Wizzrobes may drop either a Heart, one Rupee, four Bombs, or a Clock, while blue Wizzrobes may drop either a Heart, one Rupee, or a Fairy.[note 2]

Wizzrobes in A Link to the Past appear in Misery Mire and Ganon's Tower. The Wizzrobes of Misery Mire wear green robes and brimmed hats. Unlike Wizzrobes from The Legend of Zelda, they appear and disappear in one place, and cast spells at Link in between. Their teleportation spells are slow, however, as they will briefly appear transparent just before emerging and vanishing. They can only be attacked once they take physical form.

Wizzrobes in Link's Awakening appear similarly to their green A Link to the Past incarnation, staying in one spot as they vanish and reappear. When one emerges, it first appears as a hat on the floor, indicating where it will appear. It then rises and fires an attack in Link's general direction before vanishing again. Unlike previous Wizzrobes, they cannot be harmed with the Sword, which will instead only repel them back. They can only be harmed by firing an Arrow at them with the Bow, which will defeat them in four hits, or by planting a Bomb near them, which will defeat them in one hit. Wizzrobes can also be stunned with the Hookshot or Boomerang, making it easier to defeat them with a Bomb. They appear in the Face Shrine.

Wizzrobes come in three different color varieties in Oracle of Seasons, and have the same appearance as in past games. The green variety behaves identically to the Wizzrobes of Link's Awakening, staying in one place and attacking Link with their spells from that spot. The red variety has more health, and teleports around the room, attacking in the same way. The blue Wizzrobe behaves more like the blue Wizzrobes of The Legend of Zelda, as they move around the room while casting spells. They are also faster at casting than the other two. Like the Wizzrobes of The Legend of Zelda, the blue variety is able to make itself invulnerable to attack when changing direction. While it does this, it also has the added advantage of moving through objects, but cannot harm Link.

Wizzrobes come in three different color varieties in Oracle of Ages, and have the same appearance as in past games. The green variety behaves identically to the Wizzrobes of Link's Awakening, staying in one place and attacking Link with their spells from that spot. The red variety has more health, and teleports around the room, attacking in the same way. The blue Wizzrobe behaves more like the blue Wizzrobes of The Legend of Zelda, as they move around the room while casting spells. They are also faster at casting than the other two. Like the Wizzrobes of The Legend of Zelda, the blue variety is able to make itself invulnerable to attack when changing direction. While it does this, it also has the added advantage of moving through objects, but cannot harm Link.

Three varieties of Wizzrobes appear in Four Swords, and the game also introduces the red Fire Wizzrobe and the blue Ice Wizzrobe. While the standard green variety attacks normally, the Fire and Ice Wizzrobes wield fire and ice magic, respectively. They appear in Vaati's Palace.

Wizzrobes return to their original appearance as hooded humanoids.

Wizzrobes take on a significantly different look in The Wind Waker, characterized by their toucan-like faces and wing-like sleeves. They usually wear dark cloaks with hoods and carry wands that they use to cast their spells. Like previous appearances, they disappear and reappear using magic. When they teleport, a sound is heard to indicate their position. They come in two common, colored varieties and use different strategies. Wizzrobes with red hoods shoot fireballs, while Wizzrobes with yellow hoods can both shoot fireballs and summon other enemies.[6] There are also Wizzrobes with white robes and blue hoods, which behave identically to red-hooded variants, that appear atop Lookout Platform near the Seven-Star Isles.[7] Wizzrobes can be defeated in one hit if they are frozen with an Ice Arrow and then tossed at a wall, shot with a Fire Arrow, or crushed with the Skull Hammer. A Wizzrobe (Boss) Miniboss also appears in the Wind Temple, wearing a distinctive orange cloak and crown.

Wizzrobes are able to steal Force Gems from the Links in Four Swords Adventures, while also using fire and ice spells. They closely resemble the Wizzrobes from A Link to the Past and first appear in the Eastern Temple.

Wizzrobes in The Minish Cap appear identically to their appearance in Four Swords, with three varieties; standard green Wizzrobes, Fire Wizzrobes, and Ice Wizzrobes. They appear in the Palace of Winds and Dark Hyrule Castle. Ice Wizzrobes are weak to fire-based attacks, and can be instantly defeated using the Flame Lantern.

Wizzrobes in Phantom Hourglass retain their bird-like appearance, but are slightly smaller, wear cloth masks, and carry large scythes instead of wands. In spite of the aesthetic similarities, they take on a completely different role in the game. They appear only in the Temple of the Ocean King and do not use their traditional magic. Instead, they are invisible until right before they attack. They will sneak up to steal 15 seconds from the Phantom Hourglass with a swipe of their scythes. They appear as Skulls on the map on the top screen, which is the only way to track them without coming in range of their attacks. Defeating one earns Link 30 more seconds of the Sand of Hours.

Wizzroboes appear as enemies in Cadence of Hyrule. 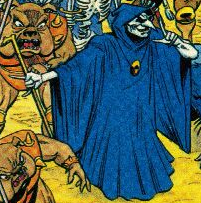 Wizzrobe in the Valiant Comics

The Wizzrobes in the The Legend of Zelda comics by Valiant Comics highly resemble their original artwork from The Legend of Zelda. Although a Wizzrobe makes a brief appearance in "He Also Serves,"[8] they play a more important role in "To the First Power" and, to an extent, in "Queen of Hearts."

In "To the First Power," a Wizzrobe commands several of Ganon's minions to tie Link up after Zelda heads inside the Eagle Labyrinth to train against Ganon's minions. However, the Wizzrobe reveals to Link that he filled the Eagle Labyrinth with the most dangerous of enemies so that Zelda may not stand a chance up against them.[9] Although Link confronts the Wizzrobe and tells him that capturing Zelda will do no good since he is the one that Ganon wants, the Wizzrobe confesses that he is not interested in following Ganon's orders anymore.[10][11] He elaborates that he has gathered many other minions who feel the same way, and as soon as he destroys Link and Zelda, all of Ganon's minions will join his renegade army, leaving Ganon to fail.[12]

Eventually, Zelda makes her way to where the Wizzrobe and Link are, delighting the foe since he will now be able to defeat her himself.[13] The Wizzrobe shoots a magic beam at her, which Zelda dodges and quickly fires an Arrow from her Bow towards it, making him fall into a fire pit that sends the Wizzrobe back to Ganon.[14][15] The story ends with the Wizzrobe kneeling in front of Ganon while the Prince of Darkness praises him since he could make use of a "deceitful and treacherous" man like him.[16]

The Wizzrobe in "Queen of Hearts" is in charge of securing the Magic Container that holds all of Queen Seline's magical powers.[17] When Link and Seline make their way to where the magic container is, they are confronted by a Wizzrobe and a horde of Ganon's other minions. Link is then heavily injured and faints, and before the Wizzrobe can finish him off, Zelda appears and shoots an Arrow at the Magic Container,[18] restoring Seline's powers and allowing her to easily defeat the Wizzrobe and the rest of the enemies.[19]

A Wizzrobe disguised as a Fortune Teller appears in The Crystal Trap. Known as Madame Grusha, she resides in the Town of Ruto. If Zelda visits Madame Grusha's hut, she will guess that Zelda has traveled far and that she is searching for three things. The Fortune Teller goes on to explain that she knows how to help the princess, but she cannot speak of it in their current location and asks that Zelda follow her into her inner sanctum.[20] Following Madame Grusha will lead to Zelda's death, while deciding to not follow her will result in a fight between Zelda and the Wizzrobe, along with some Moblins. However, the princess manages to defeat both enemies and come out of the hut alive.[21]

In Zelda's Adventure, Wizzrobes appear wearing blue cloaks and carrying wooden staffs. They walk around and occasionally cast blasts of magic, however unlike their canonical incarnations, they do not teleport at will. They appear in the Shrine of Illusion and the Shrine of Destiny.

A Wizzrobe appears in Chapter 9 of the A Link to the Past comic by Shotaro Ishinomori. After Link exits the Swamp Palace, he hears Princess Zelda contact him telepathically from beyond the wasteland.[22][23] Epheremelda, who cannot hear Zelda's calling, advises Link against going to the wasteland as it is too dangerous.[24] Link disregards her suggestion,[25] heading into the wasteland where he stumbles into an oasis from where Zelda is calling his name. The young hero ventures in and finds her.[26] As he remembers the Maiden's words of Zelda being inside Turtle Rock,[27] the princess turns out to be an illusion made by a Wizzrobe, who promptly captures Link and conjures Vitreous from the swamp to devour him.[28] However, a whirlpool is created that engulfs both Vitreous and the Wizzrobe, and from beneath Zora appears to rescue Link.