From Zelda Wiki, the Zelda encyclopedia
(Redirected from Windfall)
Jump to: navigation, search

Windfall Island is a recurring location in The Legend of Zelda series.[1][citation needed] It is a market town in the Great Sea, and is known for having the highest population of all the islands in the game. People from all over the world come to Windfall Island, and as such, the town is always lively.[2] Many sailors have found their way here, although their ships are never around. 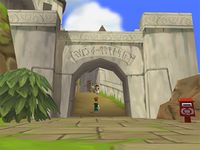 The Windfall Gate, one of Windfall Island's most famous features

To avoid the Great Flood, the surviving populations of Hyrule Castle Town and Kakariko Village fled to what would become Windfall Island and founded the community there.[3]

There are multiple places of interest on the island, including a Potion Shop, Bomb Shop, a lighthouse and windmill, school, a Cafe Bar, Auction house, and a Town Jail. The huge gate at the entrance of town is known to be one of Windfall's most famous features.[4]

Link first encounters Windfall Island after being cast out of the Forsaken Fortress and rescued by the King of Red Lions. It soon becomes apparent that the entity at the fortress has taken its toll on the island in its search for young, pointy-eared girls.

The King of Red Lions immediately makes it clear that he needs a Sail in order to travel the seas.[5] Link first encounters the strange Zunari, who offers him a sail for 80 Rupees.[6] The Zunari-induced Island Trading Sequence in the game is central to this point, where Zunari eventually "retails" his flowers.

Here, Link gets to meet many interesting characters and get involved in numerous sidequests, such as that of Mrs. Marie's Joy Pendant obsession and the Picto Box quest. There are many things to do and see here, so Link visits Windfall Island quite often, both for plot-related events and to simply help out the citizens of the town. 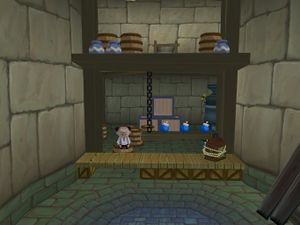 The inside of Bomb-Master Cannon's Bomb Shop

Owned by Bomb-Master Cannon, the last bomb-maker left in the entire sea,[7], the Bomb Shop in Windfall Island is separated from the rest of the shops of Windfall. At first, the bombs here are too expensive for Link to even be able to afford. It's only after Tetra and her crew of pirates tie Bomb-Master Cannon up and steal his bombs that he lowers the price.

There is a prison cell located near the middle of the town in which Tingle is imprisoned. Link can press a Switch hidden behind a cluster of Jars to free Tingle, who will thank him by giving him the Tingle Tuner and a map with the location of his Island[8] Once Tingle is freed, Link can push the box that's against the wall out of the way to reveal a small hole through which he can crawl and eventually find the Picto Box.

Located next to the mansion, the Chu Jelly Juice Shop specializes in making potions out of Chu Jelly. Link can bring 15 of each Chu Jelly to either get potions for free or allow Doc Bandam, the owner of the shop, to make new kinds of potions.

A small shop owned by Zunari, it starts out selling nothing but a sail. Link can help his business grow by trading Zunari's decorations with the Traveling Merchants around the Great Sea. See Island Trading Sequence for more information.

One of the most famous hangout places of Windfall, the Cafe Bar is located next to Zunari's Shop and is owned by Gillian. The Cafe Bar is not crucial to Link's quest, but he is required to visit it during various sidequests.

Windfall Lighthouse after being reactivated

Prior to the events of The Wind Waker, Windfall's lighthouse went dark for unknown reasons, and it has remained that way ever since.[9] Below it is a type of ferris-wheel that allows anyone to climb up to the lighthouse to get a better view. Before the lighthouse malfunctioned, it would send a bright shaft of light into the darkness to serve as a safety beacon.[10] The illumination device still works, however, and it continues to spin around despite that its fire has extinguished.[11] Link can spark up the lighthouse by getting on top of the ferris wheel and shooting a Fire Arrow inside into the device, allowing it shine its grand ray of light. Kreeb will reward Link with Piece of Heart for fixing the lighthouse.

Mrs. Marie is the town's teacher and has her own school near the lighthouse called the School of Joy.[12] When Link talks to her, she explains of the problem she's had lately with a group of students known as the Killer Bees.[13] Link can help Mrs. Marie with the little troublemakers to earn several items that will become useful later on in his quest.

Other places of interest include Lenzo's house, where Link gets to know the famous photographer Lenzo as well as his vast gallery of Pictographs. There is also an enormous mansion called the Auction House that is home to Mila and her father,[14] but later on Maggie and her father take ownership of it. The mansion also serves as the Auction House where the nightly auction takes place. Link can also play the Squid-Hunt minigame in the lighthouse in front of Mrs. Marie's school to win two Pieces of Heart.

In Hyrule Warriors Legends, Windfall Island appears with Dragon Roost Island, Star Island, Pawprint Isle, one of the Fairy Islands and the Forsaken Fortress as a stage. The stage itself is named solely for the Fortress, while Windfall Island has the Windfall shops, School of Joy and Bomb Shop Keeps as well as Outposts close to Zunari's Shop and the Windfall Gate.

"Windfall" is a word meaning great financial gain, which fits the island's status as a thriving town of merchants.