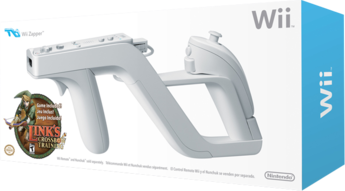 The Wii Zapper is a controller shell which houses both the Wii Remote and the Nunchuk attachment. During E3 2007, the final version of the Zapper shell was displayed. Link's Crossbow Training is one of few games that utilizes the Zapper shell, and came packed-in with the Zapper, a move that caused more Zappers to be sold.

The Wii remote fits in the front of the shell and acts as the barrel of the gun, with the front sensor exposed so it can see the Wii Light Bar. Aside from the B button, which is pressed using the shell's trigger, the buttons are not easily accessed, and only the A button, the largest of them, is readily accessed at all. The Nunchuck attachment fits into the handle of the gun, which provides easy and convenient access to all of its buttons. The C and Z buttons can be pressed with the forefinger, and the joystick is controlled with the thumb. The Zapper has a small compartment to store the Nunchuck's excess cord.

Link's Crossbow Training makes its best use of the Zapper's features in the Ranger missions, in which Link uses the joystick to move around, the trigger to fire, and the Z button to zoom in. Turning is accomplished by aiming toward the edge of the screen. The controls are designed to be comfortable and accurate, which may make it easier to keep a bead on the enemy while moving around and circle-strafing.

The Wii Zapper's primary competition is the Wii Perfect Shot by Nyko. The Perfect Shot does not support the wrist strap and does not hold the Nunchuck, but it does provide one-handed use and a spring-loaded trigger which many reviewers prefer.[1] The Nunchuck, if needed, plugs into the bottom of the handle and must be held in the other hand when using the Perfect Shot. The Zapper is designed like a submachine gun, and the Perfect Shot is modeled after an automatic pistol.