The Wii is Nintendo's 5th major gaming console, intended to succeed the Nintendo GameCube and compete with the Microsoft's Xbox 360 and Sony's PlayStation 3. All consoles come with the game Wii Sports, which was something unique to a console release. Its American release date was November 19th at a manufacturer's suggested retail price of $249.99, and December 7th in Australia with a manufacturer's suggested retail price of $399.99.[3]

It should be noted that N64 games do not support force feedback, despite the GameCube controller being equipped with built-in vibration. This is due to the N64 controller requiring an expansion pack for force-feedback. However, the GameCube releases of the N64 Zelda games did support a rumble function.

Because the GameCube Controller has a different design than the N64 controller, the buttons have been redesigned. The most notable changes are the Z button being mapped to the L button, which is placed in a similar location to the old Z button. Also, the C-Stick accounts for the C-buttons (although the X/Y/Z buttons also work). The C-Stick is logical since it has the same color and is also labeled C.

Although Nintendo strives to release each game unaltered, there have been some notable changes to the Zelda titles. In The Legend of Zelda, the intro story was entirely rewritten. For example, "All of treasures" was corrected to "All treasures" in the introduction, to make better grammatical sense (although "look up the manual for details" remains unaltered). Ocarina of Time saw an emulation in the Virtual Console of the version that omitted all Muslim references.

The Wii Family Edition was not made to replace the original Wii model; the latter is still being sold as normal. 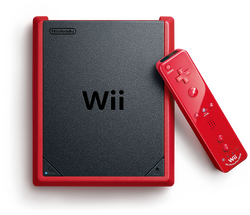 A completely different model of the Wii, called the Wii Mini, was released in Canada in 2012 and in Europe in 2013. Like the Family Edition, the Wii Mini does not support GameCube games or peripherals. The Wii Mini also does not have any internet capabilities and does not include an SD card slot. The Wii Mini also features a top-loading disc drive, like that of the GameCube, instead of the original Wii's slot-loading drive.