Weapon Reaction is a description for the responses that various animals, NPCs, objects, and certain enemies (unique enemy responses besides the basic hit which all enemies have in common) have to Link after he strikes, or attempts to strike, them with a weapon. 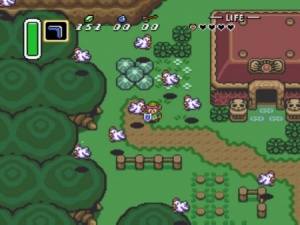 Cuccos attacking Link in A Link to the Past

In nearly all incarnations, Cuccos will get angry and call upon other cuccos to assault Link and will typically not give up until he leaves the area, or dies. This is, arguably, the most famous act of vengeance in the whole series. In Twilight Princess, however, a stricken cucco will instead fall under Link's control for a few moments.

Epona, when struck with a weapon by Link will almost always cry out in pain. Depending on where she is hit, she may rear back on her hind legs.

Signs can be broken by Link in a number of ways. In the 2D games they can be broken by throwing them with the Power Bracelet, or by hitting them with a sufficiently strong sword, usually the first optional sword upgrade can do this. Although in The Minish Cap, this ability is actually part of a Tiger Scroll. In the 3D games signs are considerably more fragile an can be broken with just about anything. In some games, Link can use a song to repair a broken sign.

In a cave or dungeon in The Legend of Zelda, hitting the Old Man causes the surrounding flames to shoot fireballs at Link.

The Dogs of Mabe Village will retaliate once against Link after being hit with something.

Striking any of the rich family members in the House of Skulltula with a sword will cause them to swing back and forth for a moment instead of rotating to face Link. Hitting them again the back will cause them to be stunned and cry out in pain. When they come to they will spin around once, which may hurt Link if he's too close, and then again when he approaches them. After that they're back to normal, or if Link leaves and reenters the building.

If Link hits any of the "walls" while exploring Jabu-Jabu's body in Ocarina of Time, the whale will shout in pain.

The bell in the Laundry Pool

The bell above Stock Pot Inn.

There are two bells in Majora's Mask that react to being hit by various weapons. There is a bell in the Laundry Pool which makes a ringing sound and then triggers Kafei to open the door to see who is there.

There is another, larger bell in East Clock Town on the Stock Pot Inn's balcony which will make a gonging sound and swing when hit. The volume of the sound and the strength of the swinging depends on how physically strong the weapon Link uses on it. With a strong enough weapon, like a Bomb, the bell will swing so fast and hard that it can knock Link off his feet. And, if he's in the right position, even clear off the balcony.

Sakon, in Majora's Mask, does not react to any attack while he roams in Ikana Canyon. But when he's attempting his theft in North Clock Town, a few basic reactions are available. If Link hits him with most attacks, he'll drop the bag he stole and run away. If Link hits him with an arrow, he'll set off the bombs in the bag and kill Sakon.

Orca on Outset Island will always block any attack that Link attempts. In their training sessions each one is counted as a hit for Link. Outside the sessions, Orca will at first ask Link what he's doing, but will grow quite angry if he continues to attempt to hit him and even attacks Link after several hits. 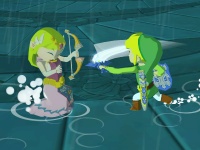 In the final fight against Ganondorf, Princess Zelda can be attacked by either Link or Ganondorf. This causes her to raise her arms in defense and flinch momentarily. If she is attacked repeatedly, she will fire three Light Arrows at her attacker. Attacking her while she aims the bow causes her to shoot the arrow immediately. This is best done with the boomerang.

A pig in The Wind Waker takes several hits to anger. Once sufficiently infuriated, the pig will glow red in anger and chase Link down trying to harm him. They will also call any other pigs that happen to be in the area to assist in seeking vengeance upon Link. They will give up if they're unable to reach Link for a period of time, or if they get into the water, in which case steam can be seen rising from them.

Besides the basic hit, Moblins also have a few unique responses to weapons. If Link hits one in the tail, they'll cry out in pain and jump around holding their tail for a few moments. If Link draws a bomb, all Moblins near him will cry out in terror and attempt to run away in a panic.

A Bullbo in Twilight Princess is very simple-minded. When struck with a weapon it will blindly dash in some forward direction without regard its riders or to what might be in its path, be it a wall or the edge of a cliff.

Guards in Twilight Princess don't actually react to being hit. But they do react to attacks Wolf Link attempts when surrounded by guards. Sufficient attempted attacks on a guard will cause him to flee. A spin attack in wolf form will cause all the guards around him to cry out in terror and then run away. Those that can't run out of the area will cower in corners.

In Twilight Princess, a Goat will respond to being hit by Link by glowing red in anger, running around to flank Link, and then charging into him.

Malo, Talo, and Beth of Ordon Village in Twilight Princess will all dodge any sword swings that Link attempts on them. They are the only characters in Twilight Princess that do this. It may have to do with the fact that all three are present when Link is first learning how to use his sword and they ask him to perform sword moves very near to them. So it's not that hard to swing a bit near their heads. The fact that Colin doesn't do this despite being grouped with them later seems to support this.

Prior to restoring the Twili to their original forms, Link can attack them with his sword; doing so will cause them to briefly flail about.

When at sea, Seagulls will follow Link's boat. Hitting any one of the seagulls with the Cannon will cause all of them to flee.

When Link is playing the Shooting Gallery game, if Link tries to shoot Romanos with an arrow, he will jump, dodging the arrow.

After calling down Beedle's Air Shop with the train whistle, Link can make Beedle take off again by hitting it with the cannon.

Doves live all over Hyrule. In locations, they are on the ground eating, and will fly off if Link gets close or uses a weapon on them. While driving the train, they will follow it in groups and if Link hits one with the cannon, they will all flee.

Dolphins follow Link's train while in Ocean Realm. Firing the cannon at them will make them flee for the rest of that segment, until Link reaches another part of water track.

Fish are present in the underwater section of the Ocean Realm. Firing the cannon at them will cause them to momentarily scatter, but they'll quickly regroup.

When Ferrus is taking pictures out next to the tracks somewhere, he will jump up startled if Link shoots a cannon bomb at the ground near him.

Hitting a Moink with the cannon will cause them to cry out in anger and then ram the Spirit Train.

Princess Zelda reacts to being hit, by weapons other than the sword, while she is possessing a Phantom. The first few hits she'll complain about being hit, but hit her enough and she'll grow angry and will then attempt to hit Link with her sword. She won't calm down until she either successfully hits him, or she falls into a sand pit.