This article is about Water as a terrain. For other uses, see Water (Disambiguation). 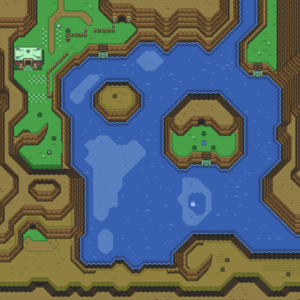 A large body of water in A Link to the Past

Water is a recurring object in The Legend of Zelda series.[name reference missing]

Water as a symbolic element

In various installments from the series, water is portrayed as part of an elemental triumvirate that encases it along with forest and fire, and is present within various different bodies of water, including rivers, seas, lakes, ponds and rainy zones. Therefore, people at Hyrule and other lands built temples and dungeons that give it a sacred value, one of the most well-known examples being the Water Temple in Ocarina of Time. In addition to representing the element canonically, this temple revolves around changing manually the current level of the water, and houses puzzles and obstacles like underground rivers and waterfalls, water-made columns, water bodies with odd current patterns, flooded (or even underwater) rooms, and aquatic enemies. It is guarded by the Sage of Water (by the moment the events of the game take place, Princess Ruto fulfills that role, and also guards the Water Medallion until she gives it to Link). The Serenade of Water pays homage to the element as well, and instantly transports anyone playing it to Lake Hylia, where the temple is located. In the same game, the Zora's Sapphire is also known as the Spiritual Stone of Water.

As in the case of the Goron race representing fire, the Zoras usually represents this element, due to them living in the aforementioned bodies of water, which are named after their own race. In The Wind Waker, however, none of them inhabit the Great Sea, as they evolved into the Rito tribe, which has instead a fixation towards wind and sky, like its patron deity Valoo does. Therefore, the element water is represented by the fishmen, who do swim across the waters of the Great Sea, and the guardian deity is Jabun, the Sea Spirit.

Water as a gameplay element

As described in the sections below, water has served multiple gameplay-wise purposes, including being an obstacle as well as an ally. Another role, from Majora's Mask onwards, is being an item. When stored in a bottle, water can be saved for key situations, such as making a plant grow and, in the case of the Hot Spring Water, melting ice chunks and even healing wounds. There is also a melody, the Song of Storms, that summons a rain instantly, and whose properties vary significantly as the event demands.

Shallow water, under normal circumstances is not hazardous for Link. A Link to the Past and the majority of titles since, contained pools, puddles, and coastlines in which Link was free to splash through with no damaging effects. In The Minish Cap, while Minish-sized, small collections of water are deadly without the Flippers. While in shallow water Link will retain his ability to use weapons, including bombs-which defuse in deeper waters.

Link is also able to swoop an empty bottle through shallow waters and receive a fill of water, Forest Water, Hot Spring Water, Mt. Crenel Mineral Water, and possibly even a fish.

Poison water first appears in Ocarina of Time. It drains Link's health slowly and is a murky green color. It is first encountered in the Royal Family's Tomb which Sharp and Flat guard. It also appears in various other areas, such as the Bottom of the Well. Poison water also appears in Majora's Mask, where it can be found in the some places at the Southern Swamp area, along with the Woodfall area, and in the Woodfall Temple. This causes damage to Link's health, but may be safely hopped across with Deku Link. In Four Swords Adventures, Link may pass through poison water at the cost of losing Health; poisoned water has appeared purple in color in The Swamp.

The polluted Zora Seas in Oracle of Ages were green and lumpy until Link assisted the Great Fairy in cleansing them. If Link tries to swim through the polluted water, he will be injured and be pushed back.

Link encounters deep water in every Legend of Zelda release. Most of the titles allow Link to swim, usually immediately or after obtaining the Flippers. While swimming above the surface Link is unable to use any of his items or weapons. In Link's Awakening, Oracle of Ages, Oracle of Seasons, and Four Swords Adventures, underwater swimming switches to a 2-D side-scrolling view and allows Link to make sword swipes. In Ocarina of Time and Twilight Princess, Iron Boots can be equipped to sink to the ground and select items such as the hookshot can be used. Staying underwater for prolonged periods of time requires a Zora Tunic in Ocarina of Time, Zora Mask in Majora's Mask, and Zora Armor in Twilight Princess. Beaver Race is a minigame directly related to swimming. In Breath of the Wild, Link's Stamina Wheel depletes when swimming in deep water.

In The Legend of Zelda, The Adventure of Link, Phantom Hourglass, and Spirit Tracks, Link cannot swim at all.[1]

Diving in Link's Awakening, Oracle of Ages and Oracle of Seasons was primarily used as a manner of avoiding hits from enemy Zoras. Occasionally there were hidden treasures, or caverns underwater. Oracle of Ages features a unique item called the Mermaid Suit that not only allowed him to swim faster, but in very deep waters. He can even dive underwater , turning his appearance into that of a mermaid. In Ocarina of Time, Link dove underwater by pressing the A button. By acquiring the Silver Scale or Golden Scale, he could dive even further. In some games, there were even items that allowed Link to stay underwater indefinitely. The Zora Tunic from Ocarina of Time and Twilight Princess allowed Link to swim to any depth underwater, while the Zora Ring of the Oracle games allowed Link to stay under the surface of the water while swimming. This allows him to swim under some obstacles, enter hidden caves or passages, and protects him from all forms of attack. The Wind Waker Link was able to swim for a set time, and he couldn't dive.

Other means of Link crossing deep water have been used as well. In The Legend of Zelda, Link could use a ladder to cross a single span of water, and a Raft to float straight out from any of the docks. The Adventure of Link returned the use of the raft, also floating it straight across with no means of steering it. The Boots could be equipped to walk on the sea with minor paths of exploration. In Oracle of Ages, Link could obtain a raft from Cheval. This raft was completely controllable. A very large, old Turtle had been awoken in Majora's Mask to transport Link to the Great Bay Temple. In The Wind Waker, Link used a small sailboat, the King of Red Lions throughout the quest as his primary mode of transportation on the Great Sea. Phantom Hourglass also relied heavily on a boat, or more accurately a steamship to travel. Twilight Princess and Link's Crossbow Training only temporarily used canoes. In certain places in Spirit Tracks, such as the Forest Temple, the Whirlwind is required to traverse bodies of water, as Link cannot swim. He must find a floating box to stand on and blow through the Whirlwind in the opposite direction. 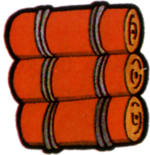 Link is at the mercy of Raging Rapids or strong currents, although a modicum of control is maintainable. In Ocarina of Time, the currents of waterfalls and Zora's River served to speed up Link's swimming pace. In Link's Awakening, Koholint Island featured a Rapids Ride mini-game.

An environmental hazard found in 3D versions of Seas, cyclones serve to dislocate Link and his craft. In The Wind Waker, Link was able to defeat Cyclos for the ability to call down his own cyclones and use it for warping. In Phantom Hourglass, cyclones were much less disruptive and only spun Linebeck's ship around a few times before dropping. These cyclones could be destroyed with cannon blasts.

Another water related hazard which duals as a warping method, whirlpools appear on the surface of waters. First appearing in A Link to the Past, once Link had the ability to swim, the Whirlpool Waterways were useful to warp around Hyrule. Whirlpools in Oracle of Ages were impassable. And whirlpools only showed up in The Wind Waker as Link was fighting Big Octos.

In Ocarina of Time, some rooms in the Water Temple were dappled with vortexes,[2] which would swallow Link and send him back to the beginning of the room if he didn't tread carefully. Most notably, the infamous "serpent-shaped" room contained a maze of these vortexes. In the Master Quest version, Hookshot targets were strategically placed to make this room far easier to navigate.