WarioWare is a series of video games published by Nintendo. They center around Wario, a character from the Mario series, and his fictional company which manufactures microgames. Many of these are Zelda-themed, and all appear in 9-Volt's sets of microgames, which are based on various Nintendo retro games. Most of the installments' microgames have three difficulty levels, with variations at each level.

The Legend of Zelda Microgames

In the first game in the series, released on Game Boy Advance and GameCube, 9-Volt's stage features the microgame The Legend of Zelda. Based on the game of the same name, the objective of the microgame is to guide Link into the cave, as in the first screen of that game.

The second installment, also on the Game Boy Advance, utilized a built-in motion sensor and rumble capabilities. Most of the microgames rely on tilting the console to complete. One of 9-Volt's microgames is also titled The Legend of Zelda, although it is quite different to the previous one. It is, however, also based on the original The Legend of Zelda. In this microgame, Link must rotate so that his Shield deflects the rocks the Octoroks attacking him. 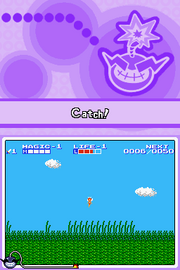 The next WarioWare game was released for the Nintendo DS. Its microgames are controlled by touchscreen input, or by blowing into the microphone. 9-Volt and 18-Volt share a stage which contains a microgame also titled The Legend of Zelda. It features levels based on The Legend of Zelda and The Adventure of Link, including the Graveyard, inside a dungeon, and the overworld. The object of the microgame is to tap Fairies that appear, restoring Link's health in the process. The later levels features enemies such as Ghinis, Moblins, and Like Likes.

The series' next game was released for the Wii. Microgames this time involved the motion capability of the Wii Remote. 9-Volt and 18-Volt share a stage, which contains two Zelda-based microgames. One is set in The Wind Waker, with Link riding the Deku Leaf outside the Forest Haven. Link must ride the wind to land on a plateau before time runs out.

The other microgame is based on Ocarina of Time, with Young Link pulling the Master Sword from the Pedestal of Time. 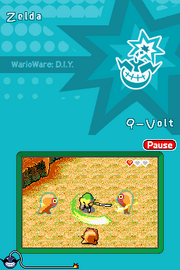 Released also on the Nintendo DS, it included the capacity to create microgames using tools supplied in the game, although many pre-made microgames were also included. 9-Volt's stage contains one microgame based on Phantom Hourglass, although it is named simply Zelda. Link has to fight off three Chuchus who are advancing towards him. WarioWare: DIY does not feature difficulty levels.

This WiiWare game links to WarioWare: DIY on the Nintendo DS to transfer microgames back and forth. It also features its own stages of new microgames. 18-Volt has his own stage in this installment, and a microgame is featured based on The Adventure of Link, titled Zelda 2. In it, Link has to defend against a Goriya's Boomerangs with his Shield. As in WarioWare: DIY, difficulty levels are not implemented.

Released on the Nintendo 3DS in 2018, WarioWare Gold features over 300 microgames, 246 of them returning from past entries in the series. "The Legend of Zelda" from Mega Microgame$! returns as one of 5-Volt's microgames, "Wind Waker" and "Ocarina of Time" return as some of 18-Volt's microgames, and 9-Volt's games include a new microgame based on Phantom Hourglass.