From Zelda Wiki, the Zelda encyclopedia
(Redirected from Vial of Winds)
Jump to: navigation, search 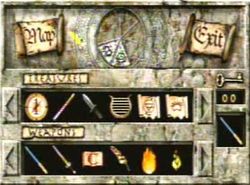 The inventory screen in Zelda's Adventure

The following is a list of items called Treasures in Zelda's Adventure.

The Black Orb is obtained in a room in the Shrine of Illusion. It is placed in a cup in another room of the same dungeon to open a door allowing Zelda to proceed onward.

The Bone is purchased from the general store in Great Wimbich for 20 Rupees. It is given to the shopkeeper's dog outside, which will give Zelda the Short Axe Spell in return.

The Bouquet is an item sold by a Shrine Merchant in the Shrine of Strength for 20 Rupees. It has no use.

Candles can be bought from various merchants around Tolemac. They are used to light up dark rooms, but can only be used once.

The Coal is received from the Quarry Miner in the East Forest. When given to the Blacksmith in Great Wimbich, it creates the Diamond.

Compasses are found in every shrine. They act similar to the Compasses in canonical Zelda games (i.e. showing Zelda's current location), but with the added effect of warping Zelda back to the shrine the Compass was found, if used outside of the shrine.

The Diamond is obtained by giving the Coal to the Blacksmith in Great Wimbich. Receiving the Diamond automatically rewards Zelda with 999 Rupees. It is kept in the inventory after, but has no other use.

The Empty Bottle is given to Zelda by Glebb the thirsty woman in southwestern Tolemac. When used at the River Source Pond, it creates the Water Bottle.

The Flute is received from Yvonne in Great Wimbich. It is used to defeat the snake outside of town, which leaves behind the Pyros Spell.

The Golden Boots are found in the Vendoss swamp. They are used to enter Sirram Bew's domed house, but do not have to be selected from the inventory to use.

The Harp is found in a cave north of the Mobilin's Head Inn. Playing this instrument allows Zelda to warp back to the beginning of a dungeon.

Crystal Hearts are jewel-like Heart Containers hidden throughout the land of Tolemac, with four in total. They increase Zelda's life meter by one each time she finds one.

Keys are items used in Shrines to open locked doors, and can only be used once. Only a very few Keys appear and are used in the game.

The Knife is obtained in a room in the Shrine of Illusion. It is used to cut open the canvas of the wall to allow Zelda to proceed onward.

The Ladder is found next to a tree in the Forest of Ogbam. It allows Zelda to cross the chasm in the Shrine of Earth.

Life Potions can be bought from a few merchants around Tolemac, and is sold for 200 Rupees. Using it refills Zelda's life meter completely. Zelda can only keep one Life Potion at a time.

The Magic Shield is sold by the Forest Trader in the Forest of Ogbam for 500 Rupees. The shield blocks most projectile attacks provided if Zelda is standing still and facing the direction of the attack.

Maps are used to see the layout of a shrine that Zelda is in. They are found in every shrine, with the exception of the Shrine of Destiny's Map, which is instead obtained from Link's Guide in the Vendoss swamp.

The Plank is found in the Shrine of Water. It is used to bridge the gap of a broken bridge in the shrine, allowing Zelda to cross over.

The Raft is found sitting next to the pond in the Meadow of Skotness. It allows Zelda to move across the bodies of water in the Shrine of Water.

Another Raft also appears in the port of Seacoast Plain, where it is used to cross the sea to Sea Island, provided if the seafarer is paid two Rupees and that Zelda has the Vial of Winds.

The Red Boots are found in the Shrine of Earth. They are used to cross over certain parts of Tolemac's river to reach the northern region. They do not have to be selected from the inventory to use.

The Red Bow is an item sold by a Shrine Merchant in the Shrine of Strength for 50 Rupees. It was stolen from the Red Knight, and is required to make him appear.

The Repellent is sold by the Swamp Merchant in the Vendoss swamp for 100 Rupees. It can be used to repel the Swamp Zola.

The Rug is dropped by a Vapora in the Shrine of Air. It can be used to make Zelda slide around less on slippery surfaces, such as those in the shrine.

Rupees are used as the currency of Tolemac. They are used to make purchases, as well as to power the Spells that Zelda can learn, which require a certain amount of Rupees to use. In order to make purchases, Zelda must first select the Rupee in the inventory.

The Saltcellar is sold by a Shrine Merchant in the Shrine of Strength for 10 Rupees. It has no use.

The Tickets are sold by the Ticket Sellers in the Shrine of Strength for 20 Rupees each. They are required to proceed ahead and to challenge the shrine mini-bosses, the Knights. There are two Tickets in total to buy.

The Vial of Winds is given to Zelda by Glebb after she brings her back water. It is used in conjunction with the Raft in the Seacoast Plain port to reach the Shrine of Water.

The Wand is Zelda's main weapon used to combat enemies with. The Wand can be used in conjunction with the Spells Zelda learns to throw magical projectiles for added offense, at the cost of a certain amount of Rupees per Spell use. The Wand can be found east of the starting point at the Vision Henge.

The Water Bottle is created from the Empty Bottle when Zelda fills it with water from the River Source Pond. When returned to Glebb the thirsty woman, she will give Zelda the Vial of Winds.