Ganondorf Dragmire is a recurring character and boss in The Legend of Zelda series.[21][22][23][24][name reference needed]

Ganondorf is not seen in A Link to the Past, though he is mentioned by the Maiden in the Swamp Palace and in the manual for A Link to the Past. The Maiden explains that Ganondorf discovered the location of the Golden Land, the resting place of the Triforce, though he allegedly couldn't find a way to return to the Light World once laying his hands on the completed Triforce and subsequently being sealed in the Sacred Realm.[25] [26]

In the seven-year span, Ganondorf began to interfere with the stability of Kingdom of Hyrule by introducing monsters and disrupting the balance of Hyrulean society.[6][50] Ganondorf deposed Talon from his position at Lon Lon Ranch, installing Ingo in his place and casting him to exile in Kakariko Village. In return for his assistance, Ingo swore fealty to Ganondorf and sought to provide him Horses raised on the Ranch.[8][51] Despite this, Hyrulean support for Ganondorf is purely opportunistic as if Link manages to tame Epona and escape from Lon Lon Ranch with her, Ingo will reform his ways and renounce his loyalty for Ganondorf.[52][53]

Following Ganondorf's death in Twilight Princess, he was reborn to the Gerudo once again prior to the events of Four Swords Adventures.[64]

Flanked by Phantom Riders, Ganondorf charges toward the duo, beginning the final battle between them. After Link and Princess Zelda successfully beat him in a horseback duel, Ganondorf will fall from his Horse. Upon recovering, he will laugh and explain that though the Sword of the Six Sages is merely a regular blade, he intends to use it to "blot out the light forever".[101] Revealing his intent, he challenges Link to a duel.

The duel between Ganondorf and Link ends when Link impales the Dark Lord with the Master Sword in the same spot that he was executed with the Sword of the Six Sages. Struggling to stand, Ganondorf warns Link that though he has been defeated, their confrontation has not truly ended.[102] Shortly afterwards, the crest of the Triforce of Power disappears from his hand.

As Ganondorf and his newly-conjured Phantom Riders charge toward Link and Princess Zelda, Princess Zelda prays to the Light Spirit to grant her the power to banish evil.[103] Responding to her call, the Light Spirit Warp them away from Ganondorf's advance and gift her with Light Arrows. With her newfound power, she asks for Link's assistance in the battle to come.[104] As Link agrees to aid her, the two return to Hyrule Field atop Epona, where Princess Zelda explains that she can stun Ganondorf with the Light Arrows long enough for Link to strike him.[105]

In order to defeat Ganondorf on horseback, Link must come within range of him to allow Princess Zelda to hit him, opening up a window of time for Link to approach and slash him. If Link takes too long, Ganondorf will temporarily summon Phantom Riders, who will charge at Link and Princess Zelda in an attempt to dismount them. Ganondorf may also use this opportunity to personally charge at them while they are distracted by the Phantom Riders.

After Ganondorf has been hit enough times, he will fall from his Horse and challenge Link in a swordsman's duel.

Sequel to Breath of the Wild 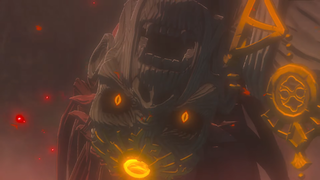 Ganondorf appears in the trailer for the Sequel to Breath of the Wild. As they are exploring underground, Link and Princess Zelda discover Ganondorf's mummified body on an altar. His body exudes Malice as he is held by the chest by a glowing green hand. When the two approach him, he awakens and looks at them.

A Link to the Past comic by Shotaro Ishinomori

A Link to the Past (Cagiva)

A Link to the Past manga by Ataru Cagiva

A Link to the Past manga by Akira Himekawa

Ganondorf appears as a Fighter Spirit that can be obtained by either clearing "Encroaching Darkness", Ganondorf's Classic Mode Route, or by purchasing it from the Shop for G 300. Ganondorf also appears as the Gandondorf (Twilight Princess) Primary Spirit.

At Level 99, the Gandondorf (Twilight Princess) Spirit can be enhanced into the Beast Ganon Primary Spirit.

Ganondorf's transformation into Ganon is inspired by the character Zhu Bajie from the 16th century Chinese novel, Journey to the West. In the novel, Zhu Bajie is banished from heaven due to his corruption and is reborn as a monstrous pig creature. The inspiration is evidenced by concept designs of Ganon from The Legend of Zelda labeling him as 牛魔王 八戒 (Ushi Maō Hakkai),[106][107] as Hakkai is the Japanese reading of Bajie.