The Bomb Shop is a recurring type of shop in The Legend of Zelda series that specializes in Bombs and their different varieties.

Bomb Shops cater to customers with Bombs and other Bomb-related goods, including Bomb Bags of different sizes and occasionally other explosive varieties. These shops usually sell bushels of Bombs in different quantities. They are commonly located in towns and villages across the overworld.

File:Bombshoplttp better.jpg
The Bomb Shop from A Link to the Past

In A Link to the Past, the Bomb Shop is located in the Dark World. It is situated exactly where Link's House appears in the Light World. The Shop is kept by the Bomb Shopkeeper. At first, he sells only regular Bombs, but after completing the Ice Palace, Misery Mire, and reuniting the Dwarven Swordsmiths, he will sell a special Super Bomb that allows Link to access the Mysterious Pond at the base of the Pyramid of Power, where the Silver Arrows and Golden Sword can be acquired. 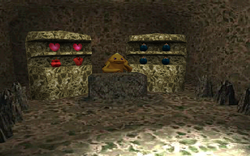 The Goron Shop from Ocarina of Time 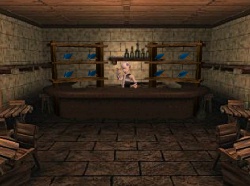 The Bombchu Shop from Ocarina of Time

In Ocarina of Time, the Goron Shop in Goron City sells Bombs in many different quantities. There is also a Bombchu Shop in the Back Alley of the Castle Town Market that sells Bombchu and is open only at night. Once a particular bundle of Bombchu has been purchased, its spot will be replaced with a "Sold Out" sign. The store's supplies will not be replenished. The Carpet Merchant in the Haunted Wasteland also sells Bombchu. However, his supplies never run out, although they are sold at 10 for 200 Rupees.