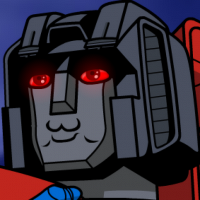 King Starscream is a long time Legend of Zelda fan. He was born in June of 1986, just short of two months before the release of the original games in the US. Since the age of 8, he has been a huge fan of the series and owns at least one copy of every title in the series, with multiple copies of older games that were re-released, mainly for the fact that the older copies no longer work. The only game in the series he has not completed is Zelda II: The Adventure of Link; he is working on that, however.

He is also a fan of Metroid, Kirby, Pokémon, and especially Transformers. However, none compare to his love of Zelda. He is a founding member of the art studio/club, Otaku United. He participated in Operation Moonfall and is stoked beyond belief that Majora's Mask 3D is soon to be released.