I'm eponasowner, an old but disloyal member of ZW who frequently sifts through the site for typographical errors and such; however I was never very ambitious and thus tend to lounge around making pointless additions to my own page. I am currently an autoconfirmed user, and someday I will grow a little more ambition and push for a higher rank.

Though this may come as a surprise to some, my name is not really Stalkid. My name is something so obscure; something so inconceivably strange; so terrifyingly, horrendously peculiar that you may even go HP Lovecraft on me if I tell you. 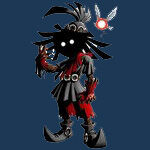 My Best Portrait, though I should have done a little touching up.

I've played Loz, Aol, Alttp, LA, Oot, MM, and LCT. I've beaten Aol, Oot, MM and LCT, I'm not good enough (or perhaps not smart enough) to figure out the rest. I believe that theories are perfectly okay as long as they have some sort of fortification (and no other reasonable conclusion is available). I'm also a creative mind more than an applied one, which means that perhaps wikis aren't for me; and I really (I have to admit) am not that useful around here.

I've been an off-and-on Zelda Wiki member for about three years now. I own an N64, with all of the zelda games available for it (yes, every single one. All of them. I've got a complete, solid collection). I'm also pretty lazy, not doing much to improve the wiki but criticizing pages for problems they may have. I'm pretty good at it.

I certainly enjoy Ocarina of Time more than I do others, though it's a short game and there is limited area for adventure. I am also a fan of the Oot Manga, but (like the game) the actual amount of content is very small. Majora's mask, though even shorter, is more difficult and certainly runner-up. I like most of the seemingly uninteresting characters such as Saria, Malon, Mido and Fado. My favorite race is undoubtedly the Kokiri.

Theories that I support

Horizontal Lines Should Be Used Sparingly!

Choose Your Own adventure!

This is a written map of the Lost Woods, my favorite place in Hyrule.

Please, do not read this.

Okay, this is the place where I complain about Oot and suggest improvements. And please, don't complain about it being unrealistic. I'm fully aware that none of these things will happen.

Essentially, this is a far expanded world of Ocarina of Time that simply allows for more adventure, more exploring, and simply a much longer gameplay. New Items have been introduced, the overworld has been stretched (like in Twilight Princess, but without a storyline that imposes on most theories), and even the storyline has been expanded slightly.

A sketchy bitmap of what the Spider's Lodestone will look like. Will require further editing for finished product.

Lake Hylia: Lake Hylia will be made much larger than its previous incarnation, almost five times as much, and the entire lake will be shrouded in a thin fog that makes it impossible to see any farther than a quarter of the way across the lake. Swimming through the lake, as such, will be a hassle; and the rope bridges will be removed (the islands will be larger and closer together). Epona will be necessary to access the water temple (the Serenade of Water will only bring Link to Lake Hylia's shore) by jumping from island to island (an automated sequence), and Cojiro will be useful to access the lake's main Island as a child (a Heart Piece will be rewarded). Time passes normally.