Skull Kid is a Skull Kid appearing in Ocarina of Time, Majora's Mask, and Twilight Princess. He is typically an antagonist or a minor character, depending on the game, and has over time befriended Link. He appears to be good friends with the Four Giants, but later stole Majora's Mask from the Happy Mask Salesman and attempted to destroy Termina as revenge towards the Four Giants, who he believed had abandoned him. However, Majora was merely using him as a puppet. He later reappears in Twilight Princess, hundreds of years after Majora's Mask. His true name is unknown, as he has only been referred to as "Skull Kid".

In Ocarina of Time, Skull Kid can be found in the Lost Woods, in the area directly to the left of the entrance room. Whenever Link approaches, he Skull Kid will disappear from the area. To circumvent this, Link can befriend him by playing "Saria's Song" while standing on top of the stump across from the Skull Kid's position. He will then receive a Piece of Heart as a gift.[1] Some of the Kokiri remember hearing him complaining about his face, as well.[2] Upon first seeing Link wearing the Skull Mask, the Skull Kid comments that he would like it to make him appear a little tougher.[3] Link is then able to sell him the mask as part of the Mask Trading Sequence, but the Skull Kid pays just 10 Rupees when the wholesale price is 20, leaving Link to cover the difference.[4] If Link encounters the Skull Kid as an adult, he will be attacked with needles shot from the Skull Kid's flute. Navi says that he is attacking because he does not like adults. If Link defeats him, the Skull Kid will collapse and disappear, leaving behind an Orange Rupee.

A Skull Kid becomes a central character in Majora's Mask. Under the influence of Majora's Mask, which he stole from the Happy Mask Salesman, Skull Kid becomes a powerful sorcerer. Using this new-found magical might, he wreaks havoc on the four worlds of Termina, ultimately attempting to destroy it by bringing the Moon down upon the land. He appears to be the main antagonist through most of the game, though he himself is not evil and is merely being controlled by the powers of Majora's Mask. Skull Kid is self-centered and has an affinity for mischief.[5] Due to his behavior and physical appearance, he is often called an imp.[6][7] The Skull Kid is resented by most Terminians because of the tricks he plays on them,[8] though he finds companionship in the sibling Fairies Tatl and Tael. He is strongly implied to be the same Skull Kid as the one in the Lost Woods from Ocarina of Time.[9] 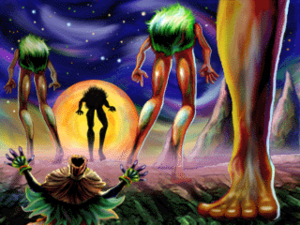 The Skull Kid forsaken by the Four Giants

Long ago, before land of Termina was split into four worlds, Skull Kid befriended the Four Giants.[10] But on the day of the Carnival of Time, the guardian deities announced to the people of Termina that they would guard the land while laying dormant. With the world of Termina now split into four parts by the order of the Four Giants, each of the deities took one hundred steps towards their respective regions. They told their people that if trouble befell them, they could call the giants in a loud voice, declaring their plight.[11] Skull Kid, who had long been friends with the giants, was stricken by their departure.[12] The imp, feeling neglected and alone, began to spread his anger and frustration throughout all of Termina.[13] Overwhelmed with misfortune, the people of Termina called upon the Four Giants for aid.[14] The giants answered with an infuriated roar. They ordered the imp to leave Termina, otherwise they would tear him apart.[15] Frightened by the giants' anger and saddened by the loss of his old friends, Skull Kid returned to the heavens.[16]

Whether the Skull Kid actually "returned to the heavens," or this is merely a hyperbole in this story told by Anju's Grandmother, Skull Kid somehow reappears in Termina prior to the events of Majora's Mask. The two sibling Fairies, Tatl and Tael, stumble upon the Skull Kid taking shelter from a storm in a tree hollow in Termina Field. He tells the Fairies that "he had been fighting with his friends and that they had left him all alone."[17] Shivering from the cold, Skull Kid and the Fairies huddle for warmth, and a bond between them was formed.[18]

Later on, Skull Kid encounters the travelling Happy Mask Salesman at the crossroads of Hyrule and Termina, the Lost Woods. He steals the evil Majora's Mask,[7] a powerful artifact used by an ancient tribe for hexing rituals.[19] The series of events that stem from this seemingly random occurrence constitute the plot of Majora's Mask.

In the prologue of Majora's Mask, Link appears riding on Epona in the Lost Woods. Along with Tatl and Tael, Skull Kid—now bearing Majora's Mask—ambushes the young hero much in the same way as the Happy Mask Salesman. Startled by their sudden appearance, Epona rears up and throws Link off, knocking him unconscious. While comatose, Skull Kid rummages through Link's personal effects and finds the Ocarina of Time. Fascinated by the object, he plays with the Ocarina until Link awakens. He then jumps on Epona and rides away with the Ocarina into an uncharted area of the Lost Woods.[20] Link pursues him, falling into the hollow tree trunk that serves as the passageway to Termina.[21] In a brief confrontation inside the Portal, the Skull Kid informs Link that he got rid of Epona, claiming the young hero's horse was disobedient and he was doing Link a favor by doing so.[22] Using the powers of Majora's Mask, the Skull Kid traps Link within the body of a Deku Scrub.[23] He then leaves with Tael while leaving Tatl behind. Link and Tatl forge an alliance and chase after Skull Kid, crossing the threshold into Termina.[24][25] 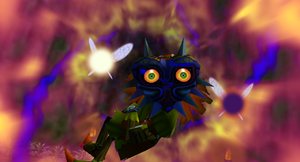 Deku Link later finds the Skull Kid atop Clock Tower at the end of the Final Day. He then makes the Skull Kid drop the Ocarina of Time by firing a Bubble Blast at him. With his Ocarina back in his hands, Link plays the "Song of Time," turning back time to the First Day. Link is then returned to his normal self after learning the "Song of Healing" from the Happy Mask Salesman, who urges Link to retrieve the stolen Majora's Mask from the Skull Kid lest the world be destroyed by its influence.[26]

Granted tremendous power by the evil mask, the Skull Kid had imprisoned the Four Giants within their temples. Without their guardian deities and their respective temples tainted with evil, each of the four regions of Termina succumbed to various disasters. [27][28] Skull Kid was also responsible for harming the Great Fairy,[29] turning Kafei into a child,[6] and informing the Gerudo Pirates of the Zora Eggs. He also threatened to break Professor Shikashi's instruments.[30] After following Tael's advice and releasing the Four Giants from their respective prisons in the swamp, mountains, ocean, and canyon, Link returns to the top of the Clock Tower at the end of the Final Day to confront Skull Kid once again. Link summons the Four Giants using the "Oath to Order" to stop the Moon. This causes Skull Kid to pass out, at which point Majora's Mask detaches itself from its puppet and rises into the Moon.[31] Link then follows it to engage in one final battle.

During the ending sequence of the game, following the defeat of Majora and the subsequent destruction of the Moon, Skull Kid, Link, the Happy Mask Salesman, and the Four Giants come together on the outskirts of Termina Field. The giants reassure Skull Kid—now free of Majora's influence—of their friendship with him.[32] After the giants return to their resting places, Skull Kid asks Link if they too could be friends, mentioning that he has the same smell as the "fairy kid" who taught him a song in the Lost Woods.[9][33] This suggests that the Skull Kid is the one by the tree stump near the bridge in the Lost Woods in Ocarina of Time, to whom the young hero sells the Skull Mask. Finally, the group goes their separate ways. The last scene shows a drawing on a tree trunk made by the Skull Kid showing him with Link, Tatl, Tael, and the Four Giants.

In Twilight Princess, the Skull Kid leads Link through the Lost Woods portion of the Sacred Grove until he reaches the resting place of the Master Sword. Along the way, the Skull Kid plays a game of hide-and-seek with Link, as he must find him several times before he leads him to its destination.

When Link returns to the Sacred Grove area later in the game, the Skull Kid will help him navigate the Lost Woods a second time. This time he leads him through different areas in order to reach the Temple of Time. However, two factors give away his location: the light of his lantern and the sound of his trumpet playing "Saria's Song." Although the Skull Kid never physically attacks Link, he will summon Puppets to do the job. Every time he is hit in battle, he will summon more puppets, but he can be beaten quickly with the use of the Bow. After defeating him the second time, he will tell Link that was fun and vanish. On future visits to the Sacred Grove, lights similiar to Skull Kid's lantern can be seen in tunnels, but will vanish if Link enters the tunnel.

There is no confirmed relation between the Skull Kid from Twilight Princess and one from Ocarina of Time and Majora's Mask. However, the fact that it knows "Saria's Song," which Link taught to the Skull Kid in Ocarina of Time, suggests that there is indeed a connection.

The Skull Kid Assist Trophy in Super Smash Bros. for Wii U

In Hyrule Warriors, Skull Kid appears in the Majora's Mask DLC pack. He is seen as part of Young Link's moveset, where he pulls the Moon towards the Fierce Deity Link followed by him slicing the Moon in half, causing a massive shockwave. One of Lana's costumes is also based on his outfit.

Given that Skull Kid recognizes Link from before Majora's Mask,[9][34] and that he has the same fondness for intimidating masks as the Skull Kid of Ocarina of Time, it can be inferred that these two Skull Kids are one and the same. Thus, the Skull Kid was present early in Terminian history before the world was split into four, then appeared in Hyrule during Ocarina of Time, and some time after returned to Termina for Majora's Mask. This Skull Kid must therefore possess the ability to travel back and forth between Termina and Hyrule at will. In Anju's Grandmother's story, it is said that the Skull Kid was ordered to depart from Termina and "return to the heavens" after provoking the Four Giants' wrath.[15][16] The "heavens" Skull Kid returns to could possibly be Hyrule.

Depending on how long ago the sundering of Termina took place—which is never specified—Skull Kid could have aged centuries or even millenia by the time of Majora's Mask, and even more by Twilight Princess if it is the same individual. Hence, Skull Kid is immortal or at least very long-lived.