Mercay Island is an island located in the southwestern quadrant of the World of the Ocean King in Phantom Hourglass. It is where Link wakes up after attempting to rescue Tetra from the Ghost Ship in the beginning of the game.[1] It is also where he meets his Fairy companion, Ciela, and Oshus.[2][3] The island is home to the Temple of the Ocean King, the main dungeon in the game.[4] 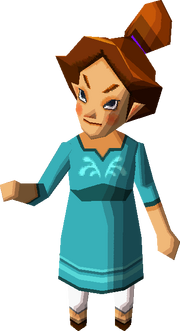 Mercay Island is one of the largest islands in the game, as well as one of the most inhabited, and is divided into four main areas. A river runs down the middle of the island, separating the two southern sections, and many trees and steep cliffs make the northern sections of the island difficult to traverse. In addition, many monsters inhabit the north, and consequently, Oshus warns Link and Ciela not to travel that way.[5]

Due to Bellum's influence, many earthquakes occur on the island,[6] which often cause the bridge crossing the river in the island's center to collapse.[7] As a result of this, the inhabitants of the island are forced to either get from one side of the island to the other by going around the long way, which is home to dark caves and monsters, or wait until the bridge is fixed.[5][8]

Oshus' House can be found in the southwestern corner of the island, on a ledge just to the north of the beach.[9] It is where Oshus resides for the majority of the game, and Link is required to visit it three times throughout his adventure. From the outside, Oshus' house appears larger than most other houses on the island. There is a fence encircling the building that prevents Link from traveling around the sides of it and reaching the back. In addition, a couple of barrels can be found in front of the building to the right of the entrance. The interior consists of one large room that is quite empty; most of the space is taken up by the the bare stone floor. A few pieces of furniture line the walls, alongside several jars and a single barrel in the bottom left-hand corner.

Link must first come here after Ciela finds him washed up on the beach, as she suggests that he visits Oshus to learn more about the Ghost Ship.[10] However, upon arriving, Oshus claims that Link shouldn't attempt to find it, as it is too dangerous a task.[11][12] This evokes a response from Ciela, who exclaims that they have to find and rescue Tetra.[13] After refusing to give up, Link is told by Oshus to visit the port and locate Linebeck, who will be willing to tell him more about the Ghost Ship.[14] Ciela explains that she remembers Linebeck from when he visited them to ask about the Ghost Ship, and asks Oshus if she can go with Link and help him.[15] Oshus agrees to this,[16] before warning Link about the recent increase in monsters, and bidding him farewell.[17] If Link returns after the bridge to the port is destroyed by an earthquake, Oshus will tell him and Ciela to wait for the bridge to be fixed and not try the path to the north.[18] If Link returns after trying to traverse the monster infested path, Oshus will scold him and Ciela for attempting to go that way.[5]

To the right of Oshus' house is a cave, which he uses as a storehouse.[19] The entrance to the storehouse is initially blocked off by a barrel which Link must pick up and throw to destroy. Just outside of the storehouse is a tree. By digging at the base of this tree, Link can find a Treasure Map.[20] The inside contains a small path leading up to a sealed door with a sign in front that tells people not to touch Oshus' things and ask for them first.[21] Initially, Link is given no clue on how to open the door. However, after Link tries to use the path to the north, Ciela will say that he needs something to defend himself with.[22] Upon returning to the storehouse, she states that Oshus stores a sword in the back of the cave, and tells Link exactly how to open the door; he must write the number of palm trees on the beach on the sign.[23] By writing down the correct answer, seven, the door will open. The back section of the storehouse contains a bridge that crosses a small length of water, followed by a treasure chest containing Oshus' Sword. To the right of the chest is a book explaining how to use the sword successfully.[24]

Also in the southwestern area of the island is a small hut home to a farmer and his wife. It is surrounded by a small pen which contains a handful of Cuccos.[25] [26] [27]

Mercay Island's port takes up the majority of the southeastern area of the island. It is one of the most populated locations in the game, and is home to several services, such as a shop and a tavern. Sailors used to pass through the port frequently, but this stopped once tales of the Ghost Ship's return began to circulate.[28] Both the island's mailbox and dock can be found in the southeast corner of the port, outside of the Shipyard. One of the island's two entrances to the Mountain Passage can be found in the north of the village, above the tavern. It is through here that Link first arrives at the port, due to the fact that the bridge to the west has collapsed. There are also several Cuccos inhabiting the area, which Link can use to glide across a gap to the west of the store. Doing so allows him to reach a treasure chest containing a random treasure.