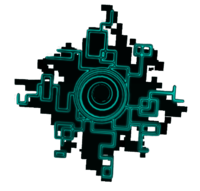 The Twilight Emblem is the mark of Zant's evil magic. It is the same shape as the Twilight Portals created across Hyrule by Zant, and can be seen on the magical barriers which appear when fighting groups of Shadow Beasts at a portal. It can also be seen when battling Phantom Zant in the Palace of Twilight, on the red globe of magic which he hurls into the air to open a Twilight Portal.

This symbol is seen emblazoned onto the bodies of all the monsters of Twilight created by Zant's magic. When any Shadow creature is destroyed, it will explode in a shower of black shadow-fragments, leaving behind a glowing Twilight Emblem which quickly evaporates.

It is unclear whether this is a symbol unique to Zant or whether it is a tribal symbol of the Twili. As this symbol appears in a green from on many innocuous locations the latter is usually assumed to be true, though the red symbol is unique to Zant's magic.