This page lists all appearances of the Triforce outside the canon main series. 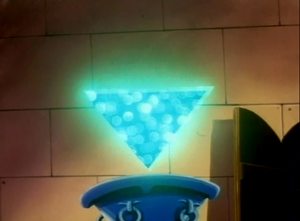 The Triforce of Wisdom 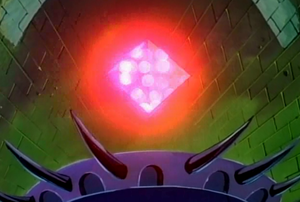 The Triforce of Power

The Triforce of Power gives Ganon an endless supply of magic and power to aid him in his attempts to overthrow the kingdom of Hyrule; without the Triforce of Power, Ganon would be defenseless.[12][13] As such, Princess Zelda is always looking for an opportunity to take it from him. She attempts to do so in two episodes, "That Sinking Feeling" and "The Moblins are Revolting"; however, she is unable to take it from Ganon's lair in the former since the Underworld was collapsing, and in the latter due to Link's clumsiness.[14]

The Triforce of Wisdom, Courage, and Power in Captain N: The Game Master

In The Legend of Zelda Game Watch, Link enters a cave unarmed to retrieve the four Triforce fragments. Each fragment is guarded by Aquamentus. Once he has retrieved all four fragments, Link reassembles the Triforce. 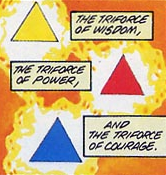 The three Triforce pieces in The Legend of Zelda comic

The Triforce of Courage remained hidden until Link accomplished a daring quest, and it now rests within his heart.[32]

In Issue #5, it is explained that once each decade an event known as the Day of the Triforce occurs. In such day, all three Triforce pieces disappear from Hyrule for one day, from dawn to dusk.[42]

The Triforce pieces also make an appearance in the Nintendo Adventure Books: The Crystal Trap and The Shadow Prince. The Triforce of Wisdom is situated in the Triforce Room of the North Castle, kept away from the hands of evil.[43] The Triforce of Courage rests within Link's heart while the Triforce of Power is in the possession of Ganon.[44][45] 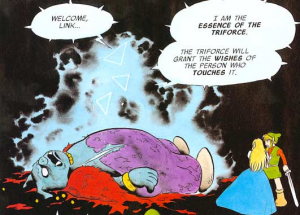 After Link defeats Ganon, the Triforce rises from his body. The Essence of the Triforce tells Link that the Triforce is waiting for a new master now that Ganon has been defeated, asking that the young hero touch it with a wish in his heart.[50] After Link touches the Triforce, the Dark World vanishes and releases all of the people who had been trapped there, returning the longed-for peace to Hyrule.[51]

In The Faces of Evil and The Wand of Gamelon, Triforce Maps appear in each stage. They appear at the beginning and end of every stage, with the exception of the games' final stages, and are used to exit and return to the map screen.

Meanwhile, The Wand of Gamelon has the Triforce of Wisdom showing King Harkinian safely returning from his journey to Gamelon, but to reassure Zelda that this would come to be, he says he would take the Triforce of Courage with him for protection, though we don't see the latter.

During Zelda's journey through Gamelon, Impa consults the omniscience of the Triforce of Wisdom to gather information such as the main objective of each area, much like how Gwonam in The Faces of Evil would show Link what was happening before taking him to the start of the area.

The Triforce appears in Super Smash Bros. Melee in the Underground Maze level in Adventure Mode. In it, the player must search for the Triforce around a maze in order to finish the level. If the player finds a Master Sword instead of the Triforce, a fight with Link will be triggered.

The Triforce appears in Super Smash Bros. Brawl when Link and Toon Link perform their Final Smash upon obtaining a Smash Ball. Known as the Triforce Slash, the Final Smash consists of light shooting out from the Triforce on the back of Link's hand, trapping the opponent as the young hero repeatedly attacks the foe with his sword. The Triforce Slash finishes off with Link making one last powerful slash at the opponent, which causes the victim to fly off.

The Triforce appears in Sonic Lost World as the goal in the Zelda-themed DLC The Legend of Zelda Zone.

The Triforce plays an integral role in the plot of Hyrule Warriors. In battle, "Triforce Pieces", which are shaped like Force Gems, are used to fill the Special Gauge.

The balance of the Triforce was once guarded by sorceress named Cia.[52] However, one of the imprisoned fragments of darkness managed to push the light out of her and take her over, planning to resurrect itself by obtaining the Triforce.[53]

While Link is battling Volga for the first time at Hyrule Field, he attempts to kill both Link and Impa with his fire breath. However, they are shielded by the power of the Triforce of Courage. Later on, at the Valley of Seers, Link, Lana, Impa and Sheik, who is discovered to be wielding the Triforce of Wisdom,[54] encounter Cia, who immediately takes their pieces. With the completed Triforce in her possession, Cia opens portals through time and space to summon three of the sealed fragments of darkness to her.[55]

After the Gates of Souls are closed in each of the three eras, Ganondorf revives himself using the three fragments of his spirit and attempts to take the Triforce from Cia, but fails as she returns two of the pieces to Link and Zelda and using the Triforce of Power to seal Ganondorf once again, keeping it for herself. After claming the Master Sword and defeating Cia at the Valley of Seers, however, Lana takes possession of the Triforce of Power, and she, Zelda and Link use the three pieces to return Hyrule to normal, closing the portals to each of the eras.

As a result of the Master Sword being pulled, the fourth fragment of Ganondorf's spirit is freed, fully reviving him. He attacks Lana and takes the Triforce of Power from her, then attacks Hyrule Castle, defeating Zelda and Link and taking their fragments of the Triforce. With the complete Triforce, Ganondorf takes over the castle, transforming it into his own stronghold. After he is defeated by Link, he uses the Triforce to transform into Ganon. When Ganon is defeated, Link, Lana, and Zelda reclaim the Triforce and use it to seal away Ganon once again.

In Hyrule Warriors Legends and Hyrule Warriors: Definitive Edition, after the fall of Ganon, Lana was searching for Cia until a dark force ambushed her, stole the Triforce of Power, and created portals to the Era of the Great Sea. After being rescued by Link, Lana, King Daphnes, and Tetra, Cia revealed that the dark force that stole the both her magic and the Triforce of Power was Phantom Ganon. The five of them then set out to stop Phantom Ganon, gathering together to weaken him. After defeating him and recovering the Triforce of Power, Lana gives it to Cia to restore her strength. Link, Lana, and Cia then head back to Zelda, where they combined the Triforce and used it to close the portals opened by Phantom Ganon. Once peace had returned to Hyrule once again, Lana and Cia returned to the Valley of Seers where they resumed their roles as guardians, protecting the balance of the Triforce.

The Triforce again appears in Super Smash Bros. for Nintendo 3DS/Wii U when Link and Toon Link use their Triforce Slash Final Smashes.

Zelda uses the Triforce of Wisdom as her Final Smash in Super Smash Bros. Ultimate.

In several Animal Crossing titles, the Triforce appears as a piece of furniture the villager character can acquire.[56] When interacted with, the three parts of the Triforce separate and twirl about before reforming, mimicking the animation and sound effects of the A Link to the Past title screen.

In New Leaf, tree stumps can contain special patterns, including one of the Triforce.