Triangle Islands,[1] also known as the Triangle Isles,[name reference needed] are locations in The Wind Waker. They are three islands shaped like triangles, in such a formation in the sea that if one were to draw lines connecting them, the result would also be a triangle.

The Triangle Islands serve the purpose of holding three statues of the goddesses, and one of three different pearls that correspond to the goddesses can be placed in their arms. This is the key to raising the Tower of the Gods that Link must enter during his quest across the Great Sea.

Eastern Triangle Island has the statue of Farore, which requires that Farore's Pearl must be placed on it for activation.

Southern Triangle Island has the statue of Nayru, and as such, Nayru's Pearl must be placed within its arms. Link can also retrieve Triforce Shard #6 from the ocean floor after obtaining the Triforce Chart from Outset Island.

Northern Triangle Isle has the statue of Din, upon which Din's Pearl must be placed. Link can also use the Treasure Chart he received from the Six-Eye Reef to obtain the Big Octo Chart here. It is one of the islands, along with Shark Island and Mother and Child Isles, where cyclones rage until Link defeats Cyclos. 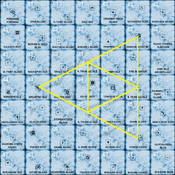