Treasure Chest Games are a recurring minigame in The Legend of Zelda series. They are commonly minigames in which Link picks from a choice of Treasure Chests to win Rupees or other items.

A Link to the Past has three places where the game can be played. One is on the south end of Kakariko Village (run by the Treasure Chest Game Keeper), another on the north end of the Lost Woods (run by a Forest Thief), and a third in the Village of Outcasts (run by a Dark World Shopkeeper). Each game differs in prices and winnings. While the other two allow Link a pick of only one out of three Treasure Chests per game, the Village of Outcasts has sixteen chests with a choice of two chests per game, and a Piece of Heart among its prizes.[1][2][3] 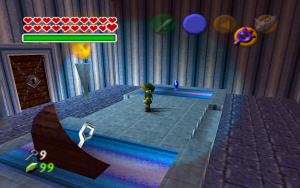 The Treasure Chest Contest in Ocarina of Time

In Ocarina of Time, the Treasure Chest Contest is located in the Market. The shop is only open at night.[4] For 10 Rupees, Link can play. The object of this game is to decide between two chests in each of the first five rooms. One chest will hold a set amount of Rupees, while the other will contain a Door Key. Receiving the Door Key will allow Link to enter the next room through a locked door, but earning the Rupee prize prevents him from going any farther.[5][6] The sixth room at the end of the game has only one chest, with a Piece of Heart inside, unless Link has already taken the prize before, in which case it is a Purple Rupee instead.

According to a Gossip Stone, it is against the rules to use glasses in this contest. This gossip actually gives a vague hint that Link can use the Lens of Truth to ensure victory, as it allows him to see the contents of each chest before he even opens it.[7]

In Majora's Mask, the Treasure Chest Shop is located in East Clock Town. The shop is open from 6 AM to 10 PM.[8] The Treasure Chest Shop Gal will change the cost and prize of the game depending on what form Link takes (Deku, Goron, Zora, or his own).[9] To win this game, Link must navigate across a black and white checkered floor to reach a chest on the opposite end of the building within a 45 second time limit. The catch is that the square segments of the floor will rise when Link is in close range of them. In this way, the black and white floor becomes a maze-like obstacle, and Link must move around the rising walls and guess which way to go to reach his goal. Because there is only a 45 second time limit, Link often must head in the correct general direction the first time; needing to turn back will cost precious time. When playing the game as a Goron, a Piece of Heart can found in the chest.

In Oracle of Seasons and Oracle of Ages, Treasure Chest Games can be played in the basements of the Lynna City Shop in Oracle of Ages, and the Horon Village Shop in Oracle of Seasons. The basements only open once Link purchases all of the items. For 10 Rupees, the shopkeeper will grant Link a choice between two chests. One of the two chests will have a large, red Rupee-like gem in it, the other will be empty. Link must guess the chest with the gem in it three times to win a prize, which is always a Magic Ring.[10] The shopkeeper will ask after the third correct guess if Link wants to keep playing. Saying "OK" will continue the game. Saying "No thanks" will earn him the offered Ring. Going another round and guessing correctly will give Link yet another choice of a prize or ending the game.[11] Winning the fifth round wins a Ring and ends the game.[12] Continuing to play more rounds will reward Link with a rarer ring.

In Four Swords Adventures, the Links can gamble in two Treasure Chest Games. The first is in the Village of the Blue Maiden, in a home in the Dark World. In this house, Link must risk 100 Force Gems to pick between three chests, some of which hold less Force Gems, or significantly more than Link originally bet. The chests can contain a large purple Force Gem (300), a blue Force Gem (100) Rupees, or 1 single Force Gem.

A second Treasure Chest Game run by a Zuna can be found in the Desert of Doubt. The risks and rewards are unchanged. 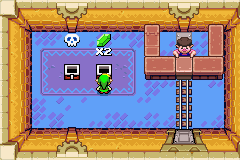 The Chest Mini-Game Shop in The Minish Cap

In The Minish Cap, the Chest Mini-Game Shop in Hyrule Town will not open until Link receives the Ocarina of Wind. A man named Anton stands outside the shop until it is finally open. The shop is run by Borlov, the younger brother of Carlov. The game costs 10 Rupees and gives Link the option of opening one of two chests.[13] Once Link pays, Borlov leads him into the back room where the chests are. Getting a green Rupee with a ×2 by it doubles the 10 Rupees Link bets on the game. This doubled number will become his earnings.[14] The other chest, however, contains a skull, which ends the game and costs Link all the money he wins. Link can keep playing the game as long as he receives the green Rupee, with each correct guess doubling his Rupees. Borlov will try to convince Link to quit playing until Link wins seven rounds, leading Borlov to force him to quit playing.[15][16] Winning the seventh round earns 999 Rupees, the maximum amount of Rupees Link can carry.

If Link fuses Kinstone pieces with Spekter, Borlov will think of a new business idea. He will then offer a more difficult game with three chests, but the cost of playing is the same. One of the three chests will hold a Red Rupee with ×3 to indicate that it triples Links money. Link can play for a total of five rounds before Borlov ends the game. Again, the maximum amount of Rupees earned is 999.

In A Link Between Worlds, Fortune's Choice is a game that appears in both Kakariko Village and Thieves' Town. In Kakariko Village, Link can open one of three chests, while in Thieves' Town, he can open three of the fifteen chests. The prizes for opening the chests can range from varying amount of Rupees or Treasures. In Thieves' Town's game, it is possible to earn a Piece of Heart.

In Tri Force Heroes, Daily Riches is a shop and a game that appears in the town of Hytopia. Link can open one of four treasure chests for free once per day, of which one of them contains a random, pre-selected piece of Material. A losing chest will always result in a Freebie Material, which is exclusive to the shop. If Link plays for every consecutive day after losing, he will have a greater chance of finding the Material prize, with there being less chests to open.

Main article: All or Nothing

Cloyne operates the All or Nothing game in his house at Lurelin Village in Breath of the Wild. All or Nothing functions similarly to other Treasure Chest Games.