In Phantom Hourglass, a Traveler's Ship is simply a ship on the World of the Ocean King that is owned by a fellow sailor. If Link boards these ships, he can talk to the boat's owner, and possibly do tasks for rewards. The entire Phantom Hourglass Trading Sequence takes place on these boats.

Nyave's boat is the first traveler's ship that Link can board and is found in the southwestern quadrant of the great sea. He is quite cowardly as shown when his ship is first boarded. It is infested with Miniblins and Nyave is on the ground playing dead. If all of the monsters are defeated, he will thank Link and give him some treasure. It is possible to come every day and repeat this, although there will be a Geozard there as well. In the Trading Sequence, Link will receive a Wood Heart by giving Nyave the guard notebook he lost.

The Prince of Red Lions

Nyeve's boat is found in the northwestern quadrant of the World of the Ocean King and is remarkably similar to the King of Red Lions, even going so far as being called the "Prince of Red Lions". Who is on the boat is possibly even more surprising — he looks just like Link except with a small white ball at the end of the cap, a heart-shaped belt buckle, blue boots rather than brown boots and a garden tool for a weapon. He plays the role of Orca in the way of being a sword-trainer character. Attacking him more than 100 times before he hits Link three times earns Link a prize. Nyeve is involved in the trading sequence, as when Link gives him the Hero's New Clothes, he gives Link a kaleidoscope. He also says he got the telescope from his sister as a joke — a reference to how Link obtained his telescope in The Wind Waker. For some reason his ship is infested with crows.

The Ho Ho Tribe is a group of seven "Telescope"-wielding, treasure-seekers, they are found in the southeastern quadrant of the great sea. They are based on Old Man Ho Ho from The Wind Waker. They originate from the land of Wayaway and now sail in a ship in search of treasure, and they can buy a specific treasure from Link that changes from time to time, occasionally for more money than the treasure teller found on Mercay Island will buy it for. During the Trading Sequence, the one that doesn't have a telescope will trade Link a kaleidoscope for the Guard Notebook. The treasure they buy and price change at midnight according to the DS internal clock. 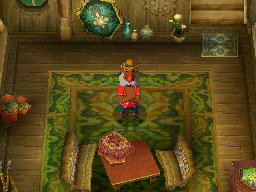 Inside the S.S. Wayfarer

The Man of Smiles is found in the northeastern quadrant of the map. Upon visiting his boat, the door will close behind Link and several enemies will appear. Defeating all the enemies will cause the door to open and the Man of Smiles to come out. The first time his boat is visited he gives Link the Hero's New Clothes, the first item of the trading sequence. Visiting him a second time will earn Link the Prize Postcard.

During the trading sequence, the Old Wayfarer is on his ship, the S.S. Wayfarer, due to the fact that the mermaid has diminished all his supplies. If he is given the Wood Heart, he will thank Link for it as it is a supply of food and then let him have Swordsman's Scroll. This ship only appears one time.