The Tower of Spirits,[1] also known as the Central Tower,[2] and Tower of the Gods,[3] is a towering fortress that appears as the central dungeon in Spirit Tracks.

Located in the middle of the five Realms of Hyrule, the Tower of Spirits was built by the power of the legendary Spirits of Good and serves as the lock on the prison of the Demon King Malladus, who can only be freed from his prison at the top of the tower using the altar that resides in the topmost chamber of the tower.[4][5] Anjean, an ancient Lokomo servant of the spirits, serves as the sage of the tower with the primary duty of guarding the tower from evil.[6][7] Phantoms also serve as guards of the tower to ward off evil ones hoping to reach the top, though they are corrupted to the side of evil by Cole, who seeks to release Malladus from his prison during the events of the game.[8] 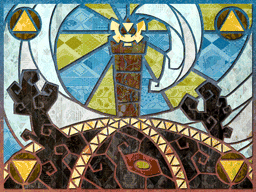 The Tower of Spirits has a long history dating back to the days prior to the re-establishment of the kingdom of Hyrule. It is said that in this land's early days, its first settlers lived in peace and prosperity under the protection of the great Spirits of Good that watched over the entire realm.[9] However, about a century before the events of Spirit Tracks, there came a day that this peace was shattered by the coming of a great evil, the Demon King known as Malladus. He was engaged by the Spirits of Good in a long and bloody conflict that resulted in much carnage and loss and seemed to have no end in sight as they attempted to use all of their might to slay the Demon King and save the world from his reign of terror.[10] However, they soon realized they did not possess the strength to truly kill him, thus necessitating a different means of halting his invasion of the land.

The spirits decided that all they could do would be to lock him away where he could do no further harm to the world, and to this end they drove his spirit deep into an underground prison.[4][11] To seal this prison, they constructed an elaborate set of shackles that spanned in four directions all across the land that would come to be known in time as the Spirit Tracks, as well as a great tower that would act as the lock on his prison, a tower that would eventually come to be known as the Tower of Spirits.[4] This tower, residing at the very heart of the land, is powered by magical energy flowing into it from four special temples across the land by means of the Spirit Tracks. As long as the tracks and the tower remained untainted, Malladus could not re-emerge from his prison and attack the land again.[12] Though this great effort exhausted the spirits' powers, they were able to bring the bloody conflict to a successful end and restore peace to the land. With their power depleted, the spirits decided to return to the heavens, giving the land over to the Hyrulean settlers led by the Hero of Winds and Tetra, who christened it as the reborn kingdom of Hyrule, and leaving their servants, the Lokomo, to protect the land and the Tower of Spirits in their stead to prevent the return of the Demon King.[13][14] 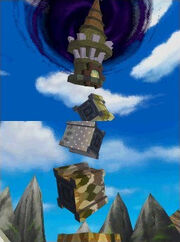 The Tower of Spirits is fragmented by Cole

Roughly a century after the kingdom of Hyrule was reinstated in the land of the Spirits of Good following the end of the War that happened between Malladus and the Spirits of Good, the events of the game begin. The Spirit Tracks have begun to vanish all across the land of Hyrule, causing the seal on the Demon King's prison to weaken since the tracks are not providing the energy necessary to the Tower of Spirits.[12][15] This does not go unnoticed by Princess Zelda, who suspects that one of her subordinates, the kingdom's chancellor known as Cole, is somehow connected to the disappearance of the tracks due to his dubious demeanor.[16] Eventually, Zelda obtains Link's and Alfonzo's help to head over to the Tower of Spirits, but then witness the tower is suddenly fragmented into five sections, four of which float in a vertical line, reducing the tower to pieces. It is at this moment that Chancellor Cole appears, alongside his henchman Byrne, and reveals his true nature as a monster masquerading as a human as well as his evil plan to revive Malladus. The duo then steal the princess's body and take it to the Tower of Spirits to use as a vessel for Malladus's revival.

Entrance to the Tower

Link reunites with Zelda's spirit at Hyrule Castle and takes the secret tunnel leading from the castle to the Tower of Spirits. There they meet Anjean, who sheds light on what is happening. She reveals that the Spirit Tracks have been disappearing because something has happened to the temples that energize the tower. She also states that Zelda's body has been taken to the top of the tower to the altar, which is now inaccessible due to the shattering of the tower by Cole. Resolving that they must somehow reach the top of the tower and stop the resurrection of Malladus, Anjean tasks the duo with restoring the Spirit Tracks by cleansing four of the five temples across Hyrule. Only by clearing the temples will the young heroes be able to climb to the altar atop the Tower of Spirits and stop Malladus's resurrection.

Each time Link and Zelda are successful in completing a temple, one floor of the Tower of Spirits is restored, allowing the young heroes to climb higher to its upper levels and retrieve one of the Rail Maps. Finally, after clearing the Fire Temple, they return to find Anjean missing after the tower is fully restored to its original state and the tracks are restored to each of the different realms of Hyrule. Climbing to the tower's highest levels, the pair face off against Byrne in the stained glass chamber of the tower just beneath the altar and are successful in defeating the Lokomo. Byrne retreats to the altar at the very top of the tower, where Cole successfully resurrects Malladus. Cole then mocks Byrne's gullibility and flees with Malladus aboard the Demon Train back to the Dark Realm to await the time when Malladus will have fully acclimated to Zelda's body, leaving the stunned heroes gazing after them from atop the tower. Anjean then appears and escorts Link and Zelda, alongside the unconscious Byrne, to the lobby of the tower.

The Compass of Light

Link and Zelda witness the departure of the Lokomos, with the Tower of Spirits in the distance

After clearing the Sand Temple and retrieving the Bow of Light, Link and Zelda are faced with a new dilemma: locating the entrance to the Dark Realm from which the Demon Train originates. Byrne instructs Link and Zelda to open the way to the uppermost floors of the Tower of Spirits by raising the altar up to reveal a hidden passageway at the top of the tower using the Bow of Light in order to obtain the Compass of Light, which will reveal the location of Chancellor Cole and the Demon Train.[17] The duo triumph once again and acquire the compass from the tower, revealing the tracks leading to the island that acts as the gateway to the Dark Realm just off Hyrule's southwestern coast.

Once Cole and Malladus are defeated, the remaining Lokomos of the land gather and ascend to the heavens to be with their kindred, knowing that with the Demon King's destruction, they are no longer needed. They leave the world under the guardianship of Link and Zelda and all of their descendants.[18] With the departure of the Lokomo and the destruction of Malladus, the purpose of the Tower of Spirits is fulfilled, and remains thereafter as a physical reminder of a conflict that has reached finally to an end. 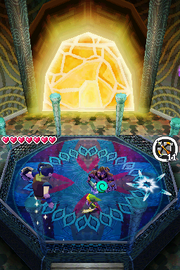 The dungeon shows a vast array of puzzles, obstacles and enemies, and requires Link and Princess Zelda working together to be fully conquered. As weapons and tools are collected from the temples, they can be used to proceed further through the floors. In most cases, said items have to be used in conjunction to the abilities from the Phantom Princess Zelda is possessing. Each floor of the tower has puzzles required to proceed to the next.

The tower has 30 floors in total, excluding the stained glass chamber and the chamber of the altar. Each floor is composed of several hallways and stairwells that function much like a maze. Each section of the tower has an entrance from the central shaft that extends up the height of the tower, and this shaft is accessible via the tower's main lobby where the Spirit Tracks converge. Phantoms are the primary enemies encountered throughout the dungeon floors of the tower, patrolling the hallways relentlessly searching for intruders attempting to ascend the tower. Princess Zelda's spirit can inhabit any of these Phantoms if they are struck with a light-infused blade, either powered by the Tears of Light scattered throughout the tower or by the power of the Lokomo Sword.

The entrance to the 23rd through 30th floors lies under the altar and is only accessible when the two Eye Switches are shot with arrows from the Bow of Light.

Comparisons to the Temple of the Ocean King

A screenshot of one of the tower's dungeon hallways

The Tower of Spirits is designed in many ways like its spiritual predecessor from Phantom Hourglass, the Temple of the Ocean King, albeit with a few changes to improve upon the dungeon design. The most important parts of the tower, such as the lobby, the stained glass chamber, and the chamber of the altar are all decorated in a rich fashion befitting one of Hyrule's most important landmarks. The dungeon floors, however, are designed much like the Temple of the Ocean King, with double doors with a large keyhole serving as primary barriers within the tower alongside the blue doors activated to rise or fall by switches and the stone monster-like doors activated by enemy activity within a given room.

Another similarity is that Link must revisit it each time he completes a dungeon to proceed further and open up a new area to explore. However, unlike its predecessor, there is a staircase that allows Link to skip over previously completed floors.[19] In addition, there is no time limit to complete the puzzles through the floors, due to the lack of a curse affecting the atmosphere of the place. Though there are still safe zones, they're only necessary to hide from Phantoms.

Whereas the Temple of the Ocean King shares the same general background theme from the dungeons in Phantom Hourglass, the Tower of Spirits has its own themes.

After Link and Princess Zelda manage to defeat Byrne and are told to go to the Sand Realm in order to find the Bow of Light, Anjean will give them a free Force Gem that activates rails leading to the aforementioned Realm, and by extension to the Sand Sanctuary.

In the Japanese, Spanish, Italian and German versions of the game, the Tower of Spirits shares the same name with the Tower of the Gods from The Wind Waker. It should be noted that the Japanese name for both uses a word, 神, that can be translated as either "god" or "spirit".

Towers in The Legend of Zelda series
Retrieved from "https://zelda.gamepedia.com/Tower_of_Spirits?oldid=852966"
Categories:
Hidden categories: