The Three Trials make up three different tests Link must complete to reach the Sand Temple in Spirit Tracks. After playing the required duet with the Lokomo, Rael, he reveals that the way to access the Sand Temple is through withstanding the Big Eye that Looms in the Shadows, the Forgotten Tunnels, and The Impenetrable Temple.

The Trials, in Order of Completion

Big Eye that Looms in the Shadows

The very Rocktite that must be defeated to move on to the second trial.

The Rocktite versus the Spirit Train in Spirit Tracks.

The Big Eye that Looms in the Shadows is the first trial.[1] After Rael directs Link towards the trials and by extension, the Sand Temple, to the north of the Sand Realm, the Spirit Train will enter a gargantuan cave, one that is home to one of the most stringent Rocktites of the game. The strategy to defeat it is almost identical to its previous incarnations found in the Fire Realm and across the Hyrule overworld, save for one aspect - this Rocktite tends to shield its weak spot, its eye, from the Spirit Train, with its impregnable rocky mouth. Instead of firing pointless cannon blasts at its durable shell, Link must direct the Spirit Train's fire towards the explosive barrels that lay embedded into the walls of the cave. When the Rocktite is near a barrel, its explosion is enough to startle it into opening its mouth, revealing its vulnerable eye. 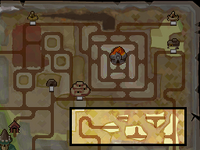 The location of the labyrinth that is the second trial.

The second trial is that of the Forgotten Tunnels,[2] and begins immediately after Link clears the first trial and the cave itself.[1] A labyrinth was erected ahead that seems as if it was made not only to confuse passengers, but impede the travel to the Sand Temple, perhaps even more so than the vicious Rocktite experienced in the trial before. The Spirit Train will pass through small cave tunnels and across many lines of track, in the hopes of navigating the seemingly impossible expanse of land - not only will choosing a different path alter the direction of the Spirit Train towards the Sand Temple, going backwards through the cave one had just exited my place the Spirit Train in a totally different section of the maze altogether. With a bit of sheer luck and perseverance, Link trudges on to the final trial, and faces the Sand Temple itself. 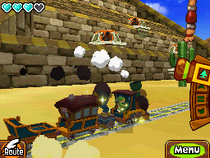 Destroying the turrets built onto the Sand Temple.

The final trial is The Impenetrable Temple, which brings Link face to face with the final temple of Spirit Tracks.[1] Literally, after Link passes the first two trials, the Sand Temple appears before him, flanked with wall-mounted cannons. Link must chart a course around the exterior of the Sand Temple in order to destroy all of the mounted cannons with his own, all while moving. Once the last cannon is destroyed, the doors to the Sand Temple will open, and Link shall be granted entrance.