The Legend of Zelda (TV Series) 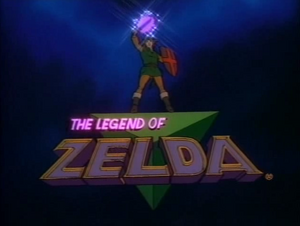 The Legend of Zelda is an animated series loosely based on The Legend of Zelda and The Adventure of Link. Produced by DIC Entertainment and distributed by Viacom Enterprises, the show aired from September 8 to December 1, 1989 with 13 episodes in total.

The Zelda cartoons were screened every week as part of The Super Mario Bros. Super Show! While the Mario cartoons were aired four days a week, the Zelda animated series was shown on Fridays.[1] Most episodes revolve around Ganon or his minions trying to obtain the Triforce of Wisdom and conquer Hyrule. However, Link, accompanied by Princess Zelda and sometimes Spryte, always ruins Ganon's plans by either zapping him into the Evil Jar or eliminating the minions that were doing the work for Ganon. The episodes each run for approximately 15 minutes.[2]

The animated series was not considered a success and was canceled after 13 episodes along with The Super Mario Bros. Super Show! Later on, compressed versions of the episodes were shown along with another Nintendo-based cartoon which was also produced by DIC Entertainment: Captain N: The Game Master.[3]

Unlike the video games, where Zelda is typically captured by the story's villain and in need of rescue, the animated series portrays the princess in more of a protagonist role, often fighting alongside Link with weapons such as the bow or the boomerang.

One of the show's running jokes is Link's repeated attempts at trying to get Zelda to kiss him for saving her life. Most of the time, the princess rejects the young hero; however, even when she agrees to indulge him,[4][5][6] it never occurs: they are interrupted by monsters, Spryte or any number of unfortunate circumstances such as something making Zelda so mad she no longer wants to kiss Link. This often resulted in Link using his infamous catchphrase: "Well, excuuuuuse me, princess!", which would later be regarded as a "beloved inside joke of many gamers."[7]

Being loosely based on the first two Zelda games, the animated series borrows many elements from the games. The most noticeable ones are the sound effects when Link shoots Sword Beams (here called "Zaps") from his sword or when he retrieves an item from his pouch, which are taken directly from the game.[8] The songs are also inspired by the Overworld and Underworld music, but they are orchestrated for the show. Although the show seems to mostly reference the original The Legend of Zelda, the series also takes some aspects from The Adventure of Link, such as the Lowder Ganon rides or the Moby seen in "Cold Spells".

While the games never truly explain how Link can carry so many items in his pockets, the cartoons interpret this by magically shrinking the items when they are placed in pouches, allowing the young hero to return the item back to its normal size whenever he retrieves it from his pocket.

Link almost never uses his sword to slash at enemies, preferring to use Sword Beams. This was likely done to tone down the violence in the series. Likewise, the Evil Jar is an original contribution to the Zelda mythos. It serves both to explain why enemies respawn after Link kills them, and to soften the violence in the series. Only magical monsters are sent to the Evil Jar when they die, and Link's sword beams cannot kill humans. 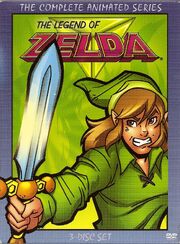 In the early 1990s, the series was released on VHS with two episodes per tape, but only four volumes were released in total. Although the animated series had been released in DVD before by Allumination FilmWorks in the early 2000s, it did not include all of the episodes. On October 18, 2005, however, Shout! Factory and Sony Pictures Home Entertainment released the complete Zelda animated series. It was made of three DVDs which contained bonus content such as interactive games. One of them is the Trivia Game that consists of several multiple-choice questions about the show and the Zelda game series.[9] The other, called the Match Game, gives the viewer about five seconds to "look at twelve pictures and then [are] asked detailed questions about them."[10] The bonus features also had content that demonstrated "easy-to-draw representations of the Legend of Zelda characters."[11]

The opening of the show goes as follows:

(Zelda theme music plays, as scene opens up in Link's room. The Triforce of Wisdom is resting on a pedestal. The door opens, and Link and Zelda come into the room)

(A short sequence occurs in which Link battles a few Moblins. The scene changes to Link and Zelda riding on horseback,heading towards Ganon's Castle. Moblins come charging out at them, and they jump into the river under the drawbridge. Link lands on some rocks, but Zelda lands in the water, soaking wet)

IGN.com comments that "younger viewers will probably feel bored and a bit put-off by the cheesy storylines and bad dialogue" of the series.[12] The website also critiques the show for the repetitiveness of the plot,[13] but comments on how the sound effects add "quaintness" to the cartoon.[7] As for the DVD release, complaints were mostly about the overall quality, further saying that the colors were "a bit too bright" in some parts and how a character's hair changes from "frame to frame."[14][15] IGN also cites how the DVD release felt rushed due to the episodes always starting with the Super Mario Bros. Super Show! animated segment.[16]