The Legend of Zelda (Board Game)

The Legend of Zelda is a board game published by Milton Bradley and licensed by Nintendo of America, in 1988. The game is heavily inspired by the original The Legend of Zelda, and uses a game board that incorporates dungeon and field-like settings reminiscent of the title. The premise is to aid Link on his quest, facing monsters and gathering "heart chips", in an attempt to save Princess Zelda. 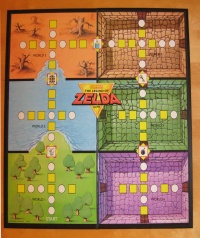 The gameboard, showing the six rooms and game spaces.

Game Board, Movement, and Pickups

The board itself is split into six realms, all of which are alike save for their settings. Within these six rooms, there are three different types of spaces, arranged as to form a cross. The circular spaces are neutral, and end Link's turn immediately; the square spaces are dangerous, and upon landing on them, Link must face an enemy selected from a pile of tiles designated to each room; the space between two rooms can only be traversed when a "Magic Item" tile is collected, in the same way that a certain item must be found in a dungeon to progress to the next one in the original The Legend of Zelda. Such tiles are shuffled and designated to the specific realms by color; enemies and Magic Item tiles are common to all rooms except the last, which only houses Ganon tiles and the Triforce tile necessary to win the game. The player also receives three "heart chips" at the start of the game that serve as hit points; for every "Magic Item" tile Link receives during his quest, he gains another heart chip.

Like many board games, The Legend of Zelda places heavy emphasis on the die in deciding the many outcomes necessary to complete Link's quest. Four dice have non-numeric sides: four sides are swords and two are red squares, while another blue die serves as the typical piece movement indicator. For an example of usage, when Link lands on a square space, he must face off against one of the original game's trademark enemies, such as an Octorok. The Octorok's tile has a small number, for this example the number will be 2, in the upper left hand corner. Link must roll at least two swords to defeat the creature and move on. If Link does not defeat the enemy, he must relinquish a heart chip to the discard pile, however, if Link defeats an enemy that displays a small heart on one of the corners of its tile, the player may add a heart chip to their life meter.

Winning and Ending the Game 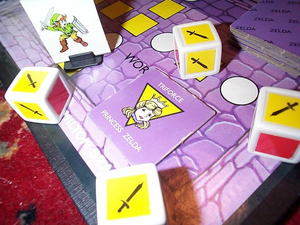 A roll of four swords securing victory and the Triforce tile.

Once a player makes it to the final room, the Princess Zelda tile will present itself, hidden under one of the square spaces. Link must roll four swords on the dice in order to capture it and win the game. However, if Link does not roll the four required swords, but does manage to reveal two, the player can re-roll the two other die in an attempt to achieve all four swords again. The game may also end if all heart chips have been removed from the player's possession via unsuccessful enemy attacks. If Link happens upon any of the other square tiles, a Ganon card will be revealed, and the player must roll the die against the foe (sometimes Ganon has 2, 3, or 4 hearts of life) before attempting to locate the Princess Zelda card once more.

Bandai, in association with Nintendo, created a similar board game called Hyrule Fantasy in 1986, released only in Japan. The game featured the overworld map of the original The Legend of Zelda as its game board, with other tiles, game pieces, and even spaces allocated for the Triforce. The game board is sectioned off in a grid-like structure, perhaps to mirror the screen-by-screen movement made famous by the video game.