The Legend of Zelda: Ocarina of Time 3D

The Legend of Zelda: Ocarina of Time 3D is a Nintendo 3DS remake of the Nintendo 64 game, Ocarina of Time. It was officially announced in E3 2010, where only a couple of screenshots of the introduction were released.[8][9][10] In the 2011 Game Developers' Conference, Satoru Iwata hinted at a June release date.[11] Japan's release date was later confirmed to be June 16, 2011,[12] followed by the European release date on June 17[13] and finally releasing in the U.S. on June 19, 2011.[14] The game also includes Master Quest, which was originally released for the Nintendo GameCube.[15]

The 3DS version is the first port of Ocarina of Time that recreates the graphics, instead of simply porting over the N64 ones, to take advantage of the more powerful hardware and fit modern standards. It is the first version of the game that is not an emulation, as the GameCube and Wii versions are. As such, most textures are significantly more detailed, and many models consist of more polygons than the original. In addition, the frame rate has been increased to 30 FPS, compared to the original's 20 FPS. This reduces choppiness significantly.

The game includes an all-new system for equipping items. Specifically mentioned at the game's announcement were the Iron Boots, due to the constant swapping necessary in the Water Temple. Both the Iron Boots and Hover Boots have been converted into items, as the Iron Boots are in The Wind Waker and Twilight Princess. In addition, the three different arrow types are accessed in a "sub-menu" that is brought up when the player selects their bow twice in their inventory, rather than being treated as separate items. The new item system consists of two items that are mapped to the X and Y Buttons, and two touch-screen only slots that are labeled I and II. Any item can be mapped to these, and they can also be cleared. The item screen now allows players to organize their inventory themselves, rather than each item having a set spot on the subscreen. When acquired, items are automatically placed in the next available spot in the 4×5 grid. Selecting an item shows its full "collection" model on the upper screen, as well as a description, the description being a feature that was first implemented in Majora's Mask.

Most of the original HUD has been moved down to the touch screen, leaving the upper screen mostly clear of graphic overlays. The only part of the HUD still on the top screen is the A Button prompt, which has been redesigned to look transparent. From this bottom screen the player has quick access to their inventory, equipment, and map. The Ocarina is permanently assigned to the bottom-left. The bottom screen can also be tapped to switch between inventory, equipment, and map, making it much easier and quicker to switch between tunics, swords, and boots.[16] The bottom screen has a camera icon that can be tapped to switch to view mode, which can be controlled by using the Circle Pad. The camera can also be controlled by physically moving the 3DS around; for example, if the Nintendo 3DS is held up, Link will look up. The view mode is also used to aim projectile weapons, such as the Fairy Slingshot and Fairy Bow. If the L Button is held, it is possible to slightly look around and increase the viewing window by moving the 3DS; this may have been done to accommodate the smaller 3DS screen. Note that this cannot be done when an enemy is being targeted. Any time Navi wants to give advice, the view icon will be replaced with a Navi icon that can be touched to hear what she has to say, and her name will flash along the bottom of the top screen.[17][16]

To unlock the Master Quest for Ocarina of Time 3D, the main quest has to be completed first. Upon doing so, the player will have an option to choose between the Main Quest or the Master Quest after starting up the game, allowing a second playthrough of the game with redesigned dungeons. The entire game has been mirrored, similarly to Twilight Princess for the Wii, making Link right-handed as well as flipping the entire overworld map and the dungeons. In addition to the game being mirrored, all of the enemies and bosses cause twice as much damage to Link, which also applies to the Master Quest's own Boss Challenge version. 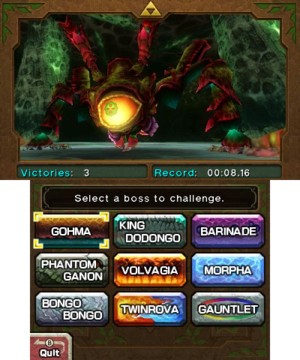 After defeating a boss, Link will have the option of battling against it once again after completing the Forest Temple. This can be done by going to his house and approaching his bed to have the option to go to sleep, which will allow him to rest up and recover his lost health.[18] From then, Link has the opportunity to fight against any boss he has already beaten.

In this new feature, battles will be timed, although they will still be played the same. Each time a boss is defeated during the Boss Challenge, the game will tally up the victory and show how many times that boss has been defeated as well as the record time.

After having defeated every boss once again, the Boss Gauntlet will be unlocked. In this mode, Link has to fight through every boss, one after another. At the end of each fight, the young hero will be rewarded with a Treasure Chest containing a power-up, such as Deku Nuts or hearts. Throughout the Boss Gauntlet mode, Link can only restore his life between battles by using any of the bottled items he might have with him. 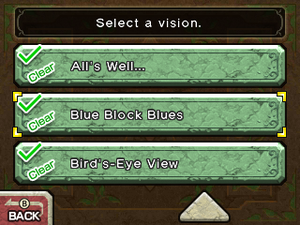 The main quest of Ocarina of Time 3D also implements a variation of the "Super Guide" feature to show players where to go next if they are stuck at a certain point in the game. This feature, which is simply called Visions, are short clips that demonstrate how to advance in the game instead of completing the puzzle directly for the player like in New Super Mario Bros. Wii.[19] These can be accessed via Sheikah Stones, which are larger, more animated versions of the Gossip Stones from the original game.[20] Link has the option to crawl inside these Sheikah Stones to bring up the Visions screen.[21] From here, the player can choose one of the Visions listed and get hints on how to complete the specified puzzle or defeat a boss.

Visions are not available in the Master Quest mode, and each Vision will only become available once a certain point in the game has been reached or the player has attempted to solve the puzzle.[22] Once a new Vision is unlocked, it will be labeled in red as "New" on the Visions screen, and it will be replaced with a green checkmark once the Vision has been watched. When the goal shown within the Vision is completed, a green "Clear" will appear next to it in the Vision selection screen. 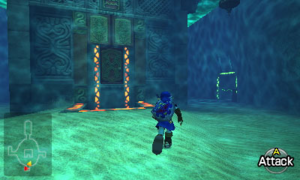 The Water Temple with the new color-coded doors 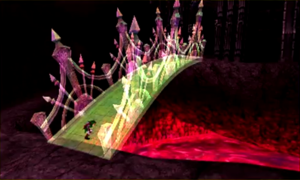 Like the original game, Ocarina of Time 3D garnered nearly universal critical acclaim. Official Nintendo Magazine notably gave the game their highest-ever review score of 98%. The game has been commercially successful as well, having sold 5.62 million copies worldwide as of December 2017.[23]

In North America and Europe, a special limited edition 3DS bundle was released. It featured a Cosmo Black console marked with the Royal Crest, the Ocarina of Time, the Goddess's Harp, and all letters in gold, plus a copy of the game. A collector's pre-sale box featuring the golden box art and a double sized poster was also included when pre-ordering the game in Europe. In Greece, pre-order bonuses included a green cap, a keychain, a plastic Ocarina of Time replica, a 3DS pouch, a can of Great Deku Tree seeds, and a copy of the game.

In Australia, another limited edition, called Ocarina Edition, was released. It included a copy of the game, a plastic Ocarina of Time replica, song sheets for "Zelda's Lullaby" and "Epona's Song," and a link to download additional song sheets.