The Legend of Zelda: Ocarina of Time (Nintendo Power)

The Legend of Zelda: Ocarina of Time is a comic published in a 1998 special edition of the German Club Nintendo magazine. It acts as a prequel to the game, explaining how Link's parents died and Link came to be raised as a Kokiri. The comic was first published in German and then translated into Dutch when published in the Netherlands. As with most comics in the German Club Nintendo magazine and related special issues, the art was done by Japanese artists at the company Work House in Tokyo.[1]

The special edition prologue was followed by a two-part comic in the regular magazine, late in 1998. It was also illustrated by Work House, but the writer(s) are unknown. The first part of this follow-up consists of a sort of overview of the game in the form of advice given to Child Link by Navi, Adult Link and Sheik. The second is a retelling of the first section of the game, until the initial meeting with Princess Zelda.[2] 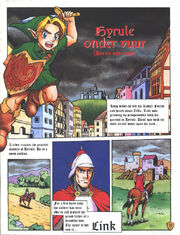 The opening page of the comic

The death of Link's father

The comic opens in the midst of the Hyrulean Civil War. Link's Father, a captain of the Castle Guard, comes home and explains to his wife and mother-in-law that while some people want Hyrule to get involved in the war between the Zora and the Gorons, this violated Hyrule's traditional neutrality. He blames the influence of the Gerudo for stirring up dissention, and is fearful that the war will harm his young son, Link, planning to flee the country once the war begins. His mother-in-law mentions that she once heard the legend of a peaceful forest people known as the Kokiri who lived in the forest and that they could flee there. However, that very night a rebellious mob storms Hyrule Castle in an attempt to overthrow the king. Link's father attempts to defend his sovereign, but is struck down and dies. Link's grandmother then urges her daughter to flee for her life.

Part 2: Escape to the Kokiri 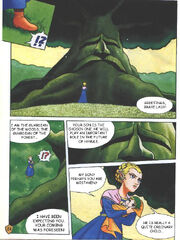 Link's mother offers her son to the Deku Tree

Link's mother flees Hyrule on horseback until she reaches the edge of Kokiri Forest. There, she meets the owl Kaepora Gaebora who tells her to take Link to the Great Deku Tree. He also warns her that according to legend, every mortal who steps into the woods will become a plant. She braves the woods, knowing that every step could be her last, until she reaches the Deku Tree. The tree tells her that her child will play a very important part in the future of Hyrule, but she doesn't believe him. To her, Link is merely an ordinary baby. The Deku Tree accepts Link, but his mother turns into a tree once the Kokiri take him in. Link grows up unaware of his Hylian heritage, being taunted by the other Kokiri because he does not have a guardian fairy. The comic ends at the opening of Ocarina of Time, with Link waking up from a terrible nightmare to find that his guardian fairy Navi has come at last.

Part 3: The Gate of Time

Navi wakes Link, but instead of meeting the Deku Tree, he meets an older version of himself. Adult Link explains the necessity of travelling between the two time periods, and Child Link is introduced to the Ocarina of Time and some of the songs that can be played. He also encounters Sheik, Gohma, and Epona while transporting around using the Fairy Ocarina.

Part 4: The Sleep of the Righteous

Link and Zelda meeting in the courtyard

Rather than a prologue to the game, this comic briefly retells the introduction and the first section of the game, including Link's nightmare and awakening by Navi, a conversation with the Deku Tree, the Inside the Deku Tree dungeon, the encounter with Saria at the exit of the Kokiri Forest, and Link's first meeting with Princess Zelda in Hyrule Castle.