The Legend of Zelda: Ocarina of Time (Himekawa)

The Legend of Zelda: Ocarina of Time is a manga by Akira Himekawa loosely based on the story of Ocarina of Time. It was released in Japan by Shogakukan in 2000 and made available in English through VIZ Media in 2008.

Volume two contains two extra chapters at the end: "The Skull Kid and the Mask", narrating the meeting of Skull Kid, and "Rouru of the Watarara", involving the manga-only Watarara race.

A Legendary Edition containing both volumes of the manga was released in Japan on March 10, 2016 and was released in North America on November 1, 2016. This premium edition features new cover art, color pages, sketches and character designs, and new stories and materials.[7][8] 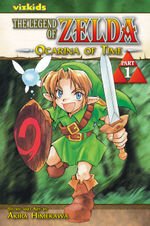 The contents of the first volume of the manga are broken into two parts with a total of ten chapters. The contents are as follows:

One day in the Kokiri Forest, a young boy, Link, awakens to find the Great Deku Tree in grave danger. When Link and Mido discover that Gohma has been sucking the energy out of the Great Deku Tree, they challenge her in battle and manage to kill her.

Link leaves the Kokiri Forest to search for Princess Zelda and give her the Spiritual Stone of Forest.

Princess Zelda tells Link of her dreams and the story of the Triforce.

Link travels to Death Mountain, where he meets Darunia and kills King Dodongo, saving the Gorons.

In Zora's Domain, Link is swallowed by Jabu-Jabu but manages to escape with Ruto, the Zora princess, and the Zora's Sapphire.

Ganondorf burns Hyrule Castle Town as Link is returning. Link manages to escape to the Temple of Time with the Ocarina of Time.

Link discovers that he has been thrown into a magical sleep for seven years. He awakens to find Hyrule destroyed. Rauru, the Sage of Light, reveals that Ganondorf is behind the destruction of the kingdom and only the seven Sages can stop him.

Link revisits the Kokiri Forest in an attempt to find the Sage of Forest, Saria. Link finds Mido, who doesn't recognize him, and saves his childhood friend.

While Link is on his quest, he encounters an old friend who has been changed by Ganondorf and is now threatening the lives of those in Hyrule. Link regretfully kills him.

During his stay in Kakariko Village, the village is attacked by Dark Link. Link manages to defeat his dark shadow. Link also meets Alf, a young boy from Kakariko. 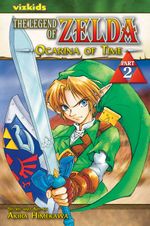 The contents of the second volume of the manga continues from the second half of Part One and also includes two additional bonus stories. The contents are as follows:

Link is gradually guided by the mysterious Sheik and encounters the Gerudo frequently. He also saves Malon from a brainwashed Ingo.

Link, still guided by Sheik, enters a vast desert. Sheik supposedly betrays Link, handing him over to the evil Gerudo. Link is then rescued by Sheik himself and explains that he betrayed Link to remain undercover. The Twinrova attack Sheik, accusing him of being a traitor. Link carries an unconscious Sheik away to safety.

Link, with the injured and still unconscious Sheik, camps at an oasis. Link goes to get water and, upon his return, finds Sheik concious and without his face wrap. Sheik removes the rest of his disguise, revealing his true identity as Princess Zelda.

Ganondorf appears and kidnaps Zelda. Link, Nabouru and several Gerudo travel to Ganondorf's Castle. The Sages create a bridge and Link confronts him inside the keep. Link barely defeats him and the castle collapses.

As Link and Zelda exit the castle, a huge beast appears; it is Ganon's true form. After a heated battle, Link kills him. Zelda plays the Ocarina of Time and sends Link back to save the past Hyrule from its fate.

During the Deku Festival, Link is cast as the main role, the Fairy Prince. This angers Mido which drives him to steal Link's mask. Link and Saria run into the Lost Woods to recover the mask, which has been stolen from Mido. They meet the Skull Kid, who returns the stolen mask.

Skull Kid attacks Link and captures Saria in order to steal her face. Link runs after him and discovers that Skull Kid set Saria free. It turns out that the Great Baga Tree is possessing Skull Kid. Link and Mido defeat the tree.

Link and Navi rest at the Fishing Hole. Link catches Rouru, a young member of the bird-folk tribe, the Watarara. Link shows Rouru to Dr. Mizumi, who reveals that he fell during migration. Suddenly, a pair of Flare Dancers appear. Link and Rouru team up to defeat them. They accidentally start falling but Elrora, Rouru's mother, comes to save them both.

Characters Exclusive to the Manga