From Zelda Wiki, the Zelda encyclopedia
(Redirected from The Legend of Zelda: Game Watch)
Jump to: navigation, search

Not to be confused with Zelda (Game & Watch).

It is commonly confused with Zelda (Game & Watch). It is considered the poorer of the two LCD games because the screen is too small to reasonably allow much strategy or movement. The playing area is even smaller than that of the Game Boy titles in the series. 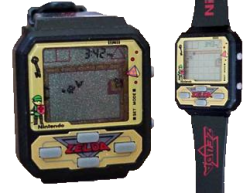 A black version of the watch.

The Zelda watch was sold in pink, black, white or red. A number of other watches based on Nintendo licenses were also made, in addition to licenses from other companies. In total, twelve million The Legend of Zelda Game Watches were sold.

It is a top-down game loosely based on the original The Legend of Zelda and includes such familiar foes as Aquamentus and Keese (here referred to as dragon and bat, respectively), as well as the exclusive Iron Balls.

The game consists of four dungeons with four rooms each.[1] In each room, Link has to collect a boomerang to defeat the Iron Balls. After all Iron Balls are defeated, he can get a sword to defeat the Keese, which first appear in the second dungeon. As a reward, he gains a key to the next room. When entering it, though, he loses his found items and has to recollect them, and if he does not make it to the next room within ten seconds of grabbing the key, 10 points will be deducted every second until they reach 0, at which point the game is over.[2] The last two rooms of every dungeon also have Hearts to replenish Link's health. Once all the enemies in the fourth room are dealt with, the dungeon's boss (which is always Aquamentus) appears. To defeat him, Link has to collect a bomb and place it in front of Aquamentus.[3] Following his victory, a Triforce fragment appears, which allows Link access to the next dungeon. After collecting all four pieces of the Triforce the game resets to level one.

Link enters a cave unarmed to collect the pieces of the Triforce. He travels through four dungeons with four caves in each, while being attacked by Iron Balls, Keese, and at the end of each dungeon, Aquamentus. After reaching the end of the fourth dungeon, Link reassembles the Triforce.[4]

"Link enters a cave. His [sic] is defenseless, without any weapons. Link is attacked by crushing Iron Balls, Ferocious [sic] bats, and a fire breathing Dragons [sic]."