The Legend of Zelda: A Link to the Past (Himekawa)

A Legendary Edition also containing the Majora's Mask manga by Akira Himekawa was released in Japan on July 28, 2016 and in North America on March 14, 2017. It features new cover art and color pages.[6]

At the beginning of A Link to the Past, a young boy named Link is awakened by a telepathic message from Princess Zelda, who says that she is locked in the dungeon of Hyrule Castle. As the message closes, Link finds his uncle ready for battle, telling Link to remain in bed. However, Link ignores his uncle's command, and after his uncle leaves, follows him to Hyrule Castle. When he arrives, he finds his uncle seriously wounded. Link's uncle tells Link to rescue Princess Zelda from her prison, giving him a sword and shield. Link navigates the castle and rescues Zelda from her cell, and the two escape into a secret passage through the sewers that leads to a sanctuary. 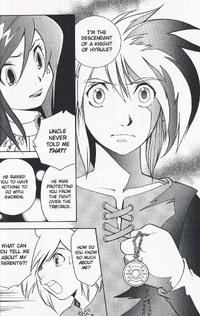 Link in the A Link to the Past manga

Link, a young farmer, is shown living with his uncle after both of Link's parents died when he was young.

As Link is sleeping, he is awakened by the voice of Princess Zelda, who summons him to help her. As Link awakes, he discovers that his uncle has disappeared. Link sets of for Hyrule Castle to save Zelda. As he walks through the dungeons, he sees his uncle getting murdered by a mysterious cloaked man, Agahnim. Link's dying uncle gifts Link with a sword and shield. Link navigates the castle and rescues Zelda from her cell, and the two escape into a secret passage through the sewers that leads to a sanctuary.

While Link is traveling, he is ambushed by the bandit Ghanti. After narrowly escaping, he discovers his face on a Wanted poster. Link also meets an old man searching for his son, who was searching for the sacred power of the Triforce. Ghanti falls into the tavern and begins to eat most of the food there. However, castle guards invade the tavern and Link escapes. Ghanti appears and kills some of the castle knights who were chasing Link. Link thanks her and Ghanti requests to join him on his quest. They venture to the Sanctuary to meet Sahasrahla. Sahasrahla meets them there and informs them of the legend of the Triforce and Ganondorf's past. He also tells Link that he is descendant of the knights of Hyrule. Ghanti attempts to stab Link, claiming that he is her enemy. Link soon sets off on a quest for the Pendants to obtain the Master Sword, however he is gravely injured by scorpion poison. Ghanti appears behind him and saves his life but runs away. Link awakes puzzled, but continues his quest. Link collects the pendants and gets the Master Sword.

In his castle, Agahnim begins to sacrifice Princess Zelda. Link soon arrives and kills Agahnim's minions. Agahnim then freezes Link and begins to tease him. Link strikes back with the power of the Master Sword, but the gate to the Dark World opens. Link falls into an endless chasm and awakens in the Dark World. He is then attacked by monsters, but a wolf appears and guides him. The wolf presents itself as the Dark World form of Ghanti.

As Ghanti leads Link through the Dark World, they meet a group of bandits transformed by the power of the Dark World. They inform Link that Ganon, the King Of Evil, plans to transform the Light World into a world of darkness. A tree begins to talk to them as well. It informs Link of the dark fate of his parents. Link and Ghanti embark on a quest to find Princess Zelda and defeat the bosses and therefore rescue the seven Maidens. As Link encounters Agahnim, a dragon attacks him. After the dragon is defeated, Agahnim reveals that it was actually Ghanti. Link begins to turn into a beast due to his inner greed, and Princess Zelda attempts to remind him of his former self. She succeeds and he turns into his original forme. Meanwhile, Agahnim tells them of his backstory. He was studying to become a wizard and had a friend who is soon revealed to be Link's father. During Agahnim's reading, he discovered how to break the seal of the sages and obtain the Triforce. He cursed his friend and his wife and sealed them in the Dark World. As Agahnim tells them of his story, Ganon interferes. He gloats over his power and tries to get more. Meanwhile, Zelda reveals that Ghanti is a knight of Hyrule and her earring is actually the Siver Arrow. Ghanti summons the Light Bow and shoots Ganon with the Silver Arrow, killing him. The Triforce appears and grants Link's wish. The trio returns to the Hero's Apple Farm, and Link offers Princess Zelda an apple.