The Legend of Zelda: A Link to the Past (Barcode Battler II) 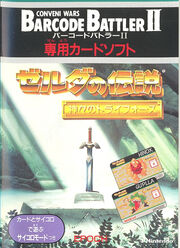 The Barcode Battler is a hand-held device that is used to scan barcodes on cards. Using those barcodes, players can alone or against a friend. It was very popular in Japan, but never caught on in other countries.

Originally, the game used generic characters, but later Nintendo allowed them to use Link and enemies from A Link to the Past.

The following is a complete list of the cards for the Zelda Barcode Battler set. There are two Link cards, ten item cards, and eighteen monster cards. These cards are listed by the English names on each card. Included are the points of each card in ST (Strength), DF (Defense), HP (Hit Points), MP (Magic Points), PP (Power Points).