The End of Ocarina of Time 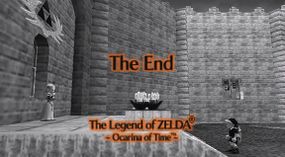 The ending of Ocarina of Time

In Ocarina of Time, Link meets up with Princess Zelda in the courtyard of Hyrule Castle as a child; Zelda and Link look through the window and see Ganondorf bowing before her father, Hyrule’s unnamed king. Zelda notes to Link that she had a dream that prophesied Ganondorf’s takeover of Hyrule, but her father did not believe her story.[3] Zelda sends Link to the Temple of Time to pull the Master Sword in order to prevent Ganondorf’s plans. As Link pulls the Master Sword, Ganondorf is able to get into the newly-opened door to the Sacred Realm, touch the Triforce, and split it into its component parts.[4]

As an adult, in the future, Link witnesses Hyrule succumb to Ganondorf’s rule; just as Zelda’s dream predicted, Ganondorf usurped the Hylian throne and sent the world into darkness using the Triforce of Power. Link confronts Ganondorf, defeats him, and then the Sages seal him in the Sacred Realm.[5]

Link is sent back in time to his childhood, before his original conversation with Princess Zelda. He tells Princess Zelda of his exploits in the future and the legitimacy of her dream. This information from the now alternate future, in conjunction with Ganondorf's overconfidence, led eventually to his capture according to the backstory of Twilight Princess,[6] creating a new future where Ganondorf doesn't take over.

In the subsequent analysis section, there will be several terms used that are integral to the understanding of the ending of Ocarina of Time.

When is the "Child" timeline created?

The "Child" timeline is created when Zelda, using the Ocarina of Time and her powers as a Sage, sends Link back in time in order to reclaim the years he lost.[8] Since the time travel occurs through the Sacred Realm, Link returns again to the Temple of Time.[9] More specifically, Link returns around the time of their original meeting. He proceeds to find Zelda at the same spot, spying at Ganondorf through the window.[10]

It's interesting to note what a hypothetical observer would see at the point where the split occurs. If the observer followed Link in the new past, he would see him vanishing and appearing again in the Temple of Time. Although this happens at an instant, the difference is radical. Link, before vanishing, hasn't acquired the Triforce of Courage yet, and is not aware of the consequences of drawing the Master Sword from its Pedestal at his age. When Link reappears (from the observer's perspective always), he now bears the Triforce of Courage and knows that if he draws the Master Sword his spirit will be sealed for seven years.

The last journey Link makes, when Zelda sends him back, can be considered unique. Previously, Link traveled several times in the past using the Master Sword, but no alternate timelines were created. As it seems, the Ocarina of Time coupled with Zelda's powers, had the ability to do that.

Why is there an Adult Timeline Split at all?

The Adult Timeline exists because Link is transported into a real future, given the foundational events in the old past. Since this would have been the natural progression of time, the people living in this time period are real as well, and go on living even through Ganondorf’s takeover of Hyrule as if their seven years had gone by naturally. Link is the only one that is not present for the span of time between the release of the Master Sword and his arrival in the future, so only he (and by extension, Zelda and Navi[11]) is aware of the apparent time difference. One must remember that during the seven years of Ganondorf's takeover, Link's spirit was withheld in the Sacred Realm, as he was not of age to become the Hero of Time when he initially drew the Master Sword.[12] When Link travels back to the old past, it is also only he that disappears from the “future”, and only he that has a recollection of the “future” – Zelda and Ganon do not travel back in time, and appear as they are as if Link had never left. Because Link returns to the new past after defeating Ganon, this plotline of the future continues in which there is no hero to face Ganon after he finds a way to escape from the Sacred Realm pre-The Wind Waker.

In the end, the future, though initially founded in the “old past”, is only spiritually related to that time period; however, the inhabitants of the future are unaware a timeline split was even created.[13][14][15] Only Link and Zelda are fully aware of the breaches in time, though only Link experienced it. This aspect of timeline theory is integral to the split timeline – because we experience Ocarina of Time vicariously through Link, the player is also objectively aware of the split timeline; to any other character in the game, it would seem as if life occurs linearly – there’s no evidence to suggest any other NPC, outside of those mentioned earlier, knows that Link actually traveled in space and time to their “present”.

How is the "Downfall" timeline created?

While the "Child" timeline is the result of Link returning to his original time at the end of the game, the creation of the "Downfall" split is not a result of a time-travel. Instead, in a similar fashion to how the cells multiply (one splits into two, each one then is divided further etc.), from an original universe which contained the events up to Link challenging Ganondorf in battle, two parallel universes were created: one in which Link was victorious and another where Link is defeated, giving Ganon the chance to obtain the complete Triforce, which leads to his subsequent sealing within the corrupted Sacred Realm by the seven Sages and later to the Imprisoning War.

It is possible that the Zelda universe is actually composed of many more parallel universes/realities than those included in the official timeline, all of them together forming a "multiverse". According to this view, there is nothing special about the point where Link challenges Ganondorf. Instead, it is just one of the many branching points in the history of Hyrule. The reason we don't see the multiverse in its entirety is because:

It should be noted that in fictional works at least, this type of multiverse does not necessarily contain every conceivable outcome.[16] Those deemed unrealistic, such as Link being defeated by weak enemies, can be omitted.

At the moment Link returns to the Temple of Time in the new past, two alternate universes are created in which:

The first postulate is the foundation for the Adult Timeline Split that leads into The Wind Waker. The opening story of The Wind Waker describes the triumph of the Hero of Time from Ocarina of Time, and how Ganon was able to return to Hyrule, unopposed, after adult Link returned to his own childhood. Two other games are confirmed to take place during this timeline: Phantom Hourglass and Spirit Tracks, both being sequels to The Wind Waker.

The second postulate is the foundation for the Child Timeline Split that leads into Majora's Mask and Twilight Princess. Majora’s Mask occurs several months after Ocarina of Time and describes how Link’s childhood search for his fairy companion, Navi, led him into an alternate world, Termina.[18] The scene in Twilight Princess which depicts Ganon's execution occurs several years later.[19]

In the Adult Timeline, Ganondorf, unlike Link and Princess Zelda, was not a chosen bearer, rather he obtained a Triforce piece simply because he touched the Triforce.[20]

Due to the fact that the Sages collaborate with the Royal Family, who was informed by Link of the "future" events, they most likely knew that Ganon had acquired the Triforce of Power in the Adult Timeline. In the Child Timeline, they didn't expect that the Triforce of Power would choose Ganondorf as its bearer. The "divine prank"[21] was that ironically, the god-created laws, allowed a man like Ganondorf to obtain a Triforce piece.

Timeline in The Legend of Zelda series
Retrieved from "https://zelda.gamepedia.com/index.php?title=The_End_of_Ocarina_of_Time&oldid=762480"
Category:
Hidden categories: