The Tetraforce is a name given to the Triforce by those who believe in a four-piece Triforce instead of three. This idea is now known not to be canon, but it has had considerable influence in the Zelda fandom.

The Hylian Shields of the Zelda series, the version from Ocarina of Time spawning the Tetraforce theory, with a fourth triangle at its base. Hylian Shields of future games were edited to end the speculative possibilities of this theory, and its possible ramifications to the series as a whole

Nintendo and Shigeru Miyamoto have vehemently denied the existence of the Tetraforce on multiple occasions. The fourth Triangle was removed from later redesigns of the Hylian Shield in Twilight Princess, Skyward Sword, and A Link Between Worlds, and also from the Hero's Shield from Majora's Mask and The Wind Waker, simply for this purpose, but is used later Super Smash Bros. Melee and Soulcalibur II. Officially, the Tetraforce does not exist and is considered fan speculation.[citation needed]

The Origins of the Theory

Belief in the Tetraforce's existence was sparked by people who noticed on Link's Hylian Shield, the pedestal on which a Hylian Eagle is standing on as a fourth triangle, jumping to the conclusion that it was a fourth piece of the Triforce that had been separated from the others, hence the name 'Tetraforce'. Was the bird itself guarding or separating the fourth piece of the Triforce from the "complete" Triforce above it, as seen on the shield? In later redesigns of the Hylian Shield (Like the one in Twilight Princess or the Hero's Shield in Majora's Mask) the alleged fourth piece is missing.

Possibly though, "Tetraforce" is not the correct name for the holy triangle considering the possibility of a fourth piece. In the very first The Legend of Zelda, there were only two pieces of the Triforce, the third one not introduced until The Adventure of Link. Because of this, the name "Triforce" refers to the triangle-shape and not the number of pieces. The Triforce will be called as such no matter the number of pieces, and as long as the overall shape remains a triangle.

Significance of the Number Four

The number four is considered highly unlucky in Japanese culture. Nevertheless, in many Zelda games, the numerology of the number four is represented more often than the number three. Examples include, in The Minish Cap, the Four Elements (red, green, blue, purple in color) instead of three, and Majora's Mask's the four main lands and Four Giants. In games such as Four Swords, Four Swords Adventures, and The Minish Cap, there are four playable Links or versions of Link. In all three games, the color scheme is the same: one green, one red, one blue and one purple.

Green, red, and blue colors have always been associated with the three different pieces of Triforce. Ganon, who possesses the Triforce of Power, is connected with the red color of its Goddess, Din. Same goes for Zelda, who aligns with the blue of Nayru, the Goddess of Wisdom. Lastly, the green Goddess of Courage, Farore, embodies Link. So where could purple come from? In The Minish Cap, Four Swords, and Four Sword Adventures, the wind mage, Vaati, has an obvious purple color scheme. In The Minish Cap, Vaati is after the "Light Force" within Princess Zelda, which could either be the completed Triforce (with a fourth piece), or just the Triforce of Wisdom itself. Is this proof that Vaati is the embodiment of the fourth Triforce piece? The antagonist, Majora, from Majora's Mask, also has a strikingly purple color scheme. But as far as color goes, we can only speculate.

Furthermore, four Light Spirits exist in Twilight Princess, (Eldin, Faron, Lanayru and Ordona), each representing their own province, with three of them representing a goddess - Eldin represents Din, Lanayru represents Nayru and Faron represents Farore. The fourth spirit, Ordona, supposedly also represents the second half of Farore's name, as made clear by the creators. However, at one point in the game, Lanayru says: "We three spirits were ordered by the Goddesses to seal away the evil power." This could imply that either:

According to the history of Hyrule, described in detail in Ocarina of Time, the Triforce was created during Hyrule's creation by the three Golden Goddesses, at the precise point where they departed for the heavens. Each god created their own piece, each embodying the essence of that certain god. For an alleged fourth piece of the Triforce to be created, another god(dess) outside Din, Nayru, and Farore must have created it. Note that there are more gods mentioned throughout the series, but they are never connected to the three who created the Triforce.

As one of the most popular theories regarding the Tetraforce, it is speculated by some that the missing "piece" represents time, and some supporters have used Princess Zelda's mention of a Goddess of Time in Majora's Mask as evidence. However, detractors point out that there's also some evidence to suggest that Nayru and a Goddess of Time are the same being. Dialogue in Phantom Hourglass suggests the Goddess of Time may be Farore, however, as Ciela states, Farore is the Spirit of Courage and of Time, though no mention of the three goddesses elsewhere is made in Phantom Hourglass.

Goddess of the Sand

Other theorists claim the Goddess of the Sand represented by the Desert Colossus could be viewed as evidence for a fourth piece. The recurring depiction of the Goddess of the Sand in Ocarina of Time and in the Arbiter's Grounds in Twilight Princess may indicate a strong significance among the Gerudo people spanning long before the Era of the Hero of Time.

Some people believe that Princess Zelda is the fourth goddess, and represents the fourth piece of the Tetraforce, hence her pirate reincarnation name, Tetra (from The Wind Waker) which is Greek for the word "four." There is a symbolic cut scene from The Wind Waker, when Tetra's necklace piece unites with a small triangle given to her by Daphnes Nohansen Hyrule. Fans speculated that this could have been a visual metaphor of Zelda owning the fourth piece of the Tetraforce and having the ability to unite it, though Link also came across the instance of needing to mend his Triforce piece from Shards, proving that it is unnecessary to possess a 4th piece to mend a Triforce fragment.

Another possibility is that the fourth inner piece represents hope; this theory comes from the Oracle games, Oracle of Seasons and Oracle of Ages. The Oracles of Seasons (Din), Ages (Nayru), and Secrets (Farore) represent pieces of the Triforce, and with Princess Zelda claiming to be the Oracle of Hope,[citation needed] the four pieces of the Tetraforce are allegedly there. It is also possible that Zelda had actually always been a Goddess of Hope sent to Hyrule to be continuously reborn as the Princess of Hyrule.

Some also note that in the final scene that Zelda is portrayed as Sheik in Ocarina of Time, she said something referencing the "True Force," of which one would receive upon bestowing equal Power, Wisdom and Courage within themselves. However, the "True Force to Govern All" is used time and time again when referring to the complete Triforce, which in context consists of only the widely-accepted three pieces. 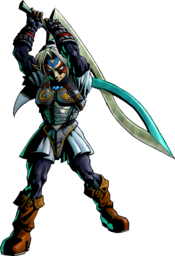 Is Fierce Deity Link showing a connection to the Tetraforce with a single golden triangle embossed on his left chest plate?

It is believed that it is impossible to control the power of the complete Tetraforce after obtaining it. Some people use Fierce Deity Link from Majora's Mask as an example. It is believed that in a past incarnation in the Zelda Timeline, Link found the complete Tetraforce and became immortal. He could not control his power and caused much destruction. This prompted the Golden Goddesses to create the Song of Healing, which was used to seal the Fierce Deity inside a mask. The child wearing Majora's Mask on the Moon implies that Fierce Deity Link may have been an evil in the past when handing Link the Fierce Deity's Mask.[4] In addition to that, the triangle over the left pectoral muscle on Fierce Deity's armor could possibly represent a fourth piece.

Some people speculate that the Tetraforce is actually Link's own flesh and blood. This would support the fact that every Link is a hero, and almost never is seen acting a crime or evil. This would also explain Dark Link's existence, as a complement to the good Link.

This theory states the dark space in the middle of the Triforce is a supposed "Triforce of Shadow." Despite the lack of evidence for this claim, it helps suggest Dark Link's creation. Also, the symbol on the Shadow Medallion is a down-pointing triangle, with three dots possibly representing the other parts to the Triforce.

An odd fact about The Wind Waker is that when Link places all three of the Goddess Pearls into their respective statues, they shoot out a beam of light that forms a downward facing triangle similar to that of the Hylian Shield prior to its redesign. The triangle then takes the form of the Triforce.

An interesting fact is that in the prologue to Spirit Tracks, on the slide that shows the Spirit Tracks holding Malladus imprisioned underground, there is a gold triangle in each of the four corners.

In pagan religious mythology (Such as Wiccan, Celtic, Greek etc) three deities may form into one being and combine powers, either for the sake of ideals, family or simply because they are not strong enough alone, so they are united into one incarnation of their selves. The term "Triple Goddess" refers to the one goddess, containing three such as how Nayru, Din and Farore are three but their efforts are vented as one, i.e. the creation of Hyrule. Could it be that the Triple Goddess of the Golden Goddesses is the metaphysical embodiment of their unified being?