The Teacher is a character in Spirit Tracks.[2] As his name would suggest, he is Princess Zelda's personal teacher. Teacher is very mindful of his student's safety, and panics when Zelda's body is taken.[3] This panic solidifies into a resolve to find the princess.[4] 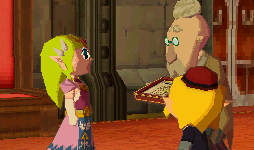 Teacher is first seen attending Link's Royal Engineer Graduation Ceremony. He appears again in the guard house when Link regains consciousness next to Alfonzo following the events leading to Princess Zelda's capture.[5] At his request, Link tells him the events of Zelda's capture.[6] Incredulous, he falls into a state of panic, at a loss for what to do.[3][7] Although having initially appeared to believe Link's story, Teacher falls into a state of denial later on, convinced that the princess is merely "wandering somewhere".[8] To Zelda's dismay, he scoffs at Link for saying that the princess' spirit had separated from her body and that she was actually standing right next to him.[9] Despite this, Teacher is in fact troubled by Zelda's disappearance.[10] He is in fact one of few to realize that the princess has disappeared. Not wanting to cause panic in the kingdom by sending out soldiers, Teacher is resolved to go out and search for the princess on his own, even though he admits not knowing where to begin his search.[11][12]

Later on, Teacher dons a meager disguise and appears at the Castle Town Train Station. If Link addresses him by his name, he will deny it.[13] He will ask Link to be chauffeured to a random location in the hopes of finding Princess Zelda.[14] After being brought to the location, he will pay Link his "driver's fee", which will vary depending on how well Link drove the train (the maximum being 300 Rupees). The locations Teacher will ask to be driven to are Aboda Village, Anouki Village, Papuchia Village, and Goron Village.[15][16][17][18] He may also ask to be driven back to Castle Town, hoping that the princess returned in his absence.[19]

After completing a puzzle at Ends of the Earth Station, Princess Zelda mentions that even Teacher, who apparently loves puzzles, would have been stumped by it.[1] She says she would like to bring him to the station "when everything settles down."[20] Zelda appears to have a certain amount of affection for Teacher.

The fee Teacher pays Link depends on his mood upon arrival at his destination: