The real name of them are Twilit Messengers —Preceding unsigned comment added by UberPhoeb (talk) 03:01, 11 June 2008

I've been meaning to go through the TP Enemies. In fact, there are are at least a dozen that don't have the correct names. No enemies have 'Shadow' in their name, all of them are Twilit. Some are missing, while others are using incorrect names. I've been using these enemy pages for a walkthrough at my own site for little enemy boxes as new enemies are introduced. Then I realized how incorrect they were so I started using other sources. I'll get to them eventually... Mases 12:38, 11 June 2008 (UTC)

Nowhere in the game are they ever referred to as "twilight messangers". It is always some form of beast. The spirit Ordona calls them "black beast" and "shadow being".

Really guys, how much more "correct" can you get than the official name they're given on the official Nintendo site? I mean, whaddya want, a signed statement from Miyamoto?? --Adam 18:09, 11 June 2008 (UTC) 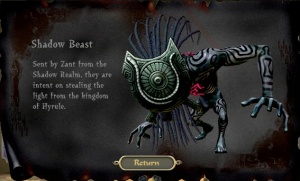 Yeah but if you read the caption by the picture of the 'creature', it says Zant sent them from the 'Shadow Realm, which is wrong as it is called the Twilight Realm. Link of Vey

Now that seems pretty accurate. I'm uncertain why Prima Games has labeled them with the title Twilit Messenger. Of course Nintendo takes preference over Prima Games in terms of accuracy. Hmmm... Unsure about the rest. Mases 05:40, 12 June 2008 (UTC)

Can someone get brighter a picture for the prototype Shadow Beast picture on the main article? I can't recognise any features apart from the mouth.—Preceding unsigned comment added by Jedi (talk) 11:50, 5 November 2008 (UTC)