they are different so... no

But technically they're the same kind of game; we've got all the Shooting Gallery games in one article, and the two articles suggested to be merged follow the same basic idea: they both may be different games, but they're the same KIND of game. --Ando (T : C) 13:01, 26 March 2008 (EDT)

...with basically the same name. How is any reader expected to tell the difference between Rapid Ride and Rapids Ride without reading both articles? At the very least, they would need to be renamed to "Rapid Ride (Twilight Princess)" etc. —Adam (talk) 15:36, 26 March 2008 (EDT) 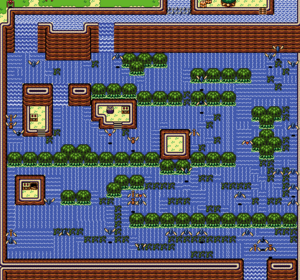 Rapids Ride from above

I've got the following image of the rapids ride, but I am struggling to find a way to include it that doesn't break the page by overlapping with the subsequent section. As far as I can see, the only options are to centre it on the page (so that the text doesn't wrap around it) or to write a load of extra bumf to push the second section down the page. Any other ideas? --• Pete ♪ | ♫ 11:20, 30 September 2009 (UTC)

I had a bit of a tamper, and got it to fit in not too badly, I think. The article definitely needs some more written content though, which should help for things to be better spaced out. {{:User:Melchizedek1866/sig 11:42, 30 September 2009 (UTC)