"Early art for Ocarina of Time shows the Triforce being kept in a sky temple, which is still visible but inaccessible in the final game."

It's a bit dark, but this is a screenshot here. From what I know it was just a beta testing run, some of the first things they did in designing OoT. It was a test of the 3D engine and never game intended.User:Melchizedek/sig 21:58, 21 January 2009 (UTC) 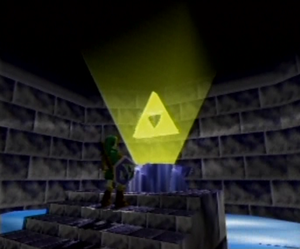 Yeah, there are images of it. The temple still being visible part is not true. That is just wishful thinking and misidentification of background objects.Matt (Talk) 22:01, January 21, 2009 (UTC)

Actually, I think I remember that image. This is reminding me of the days I went looking for interesting glitches and Easter eggs in OoT, and finding all sorts of ridiculous rumors about obtaining the Triforce involving things like getting into Gerudo Fortress as a child and beating the running man. So anyway, yeah, I guess we can get rid of that now. Actually, do we know if there actually was supposed to be some sort of sky temple, or is that totally untrue? Jimbo Jambo 23:22, 21 January 2009 (UTC)

Ah I see where I went wrong, for some strange reason ZW has a page for the plural and singular forms of this topic. Well, I'm not gonna scream for a merge but if anyone else does, I'll support it. Axiomist (talk) 02:25, 22 January 2009 (UTC)

Are you talking about Ooccoo? The introductory paragraph of this article may be a bit misleading. Ooccoo is not the singular form of Oocca, it's the name of a particular Oocca. ...At least I think. Right? That's what she calls herself, and I don't think it's ever used anywhere to refer to any other Oocca. Anyway, I'll change that now. Jimbo Jambo 03:49, 22 January 2009 (UTC)

Yes, I am aware that TP is canonical, but does anyone else feel that it completely contradicts all of the other games in-universe?—Preceding unsigned comment added by Eponasowner (talk) {{{2}}}

This discussion is off topic.

Zelda Wiki is an encyclopedia, not a forum. Please consider continuing this discussion on Zelda Universe's forums.

Talk Pages are meant to discuss improvements to the article, not the subject of the article. Comments like "This is my favorite item" do not belong here.

not really. The city in the sky could be the remains of skyloft. There is a rather large time difference between skyward sword and twilight princess. Maybe they added onto it, and gathered all those small little floating rocks and built a massive city, and the OOcca are the decedents of the loftwings. --Stelargk 15:37, 18 January 2012 (EST)

It says they were based on M.C. Escher, but Hyrule Historia contradicts this by saying that they were instead based on artist Amedeo Modigliani. Morgil27 06:51, 30 January 2013 (UTC)