If the Mirror of Twilight is the only link between Hyrule and The Twilight Realm, how come the Shadow Beasts came down from those portals in the sky? - Link of Vey

Perhaps the only reason they were able to come through is because they had an outsider (with a piece of the Triforce, no less) helping them? Zant did get Ganon's power, after all. --Ando 14:22, 31 January 2008 (EST)

I got the impression that, when a portal appeared and Shadow Beasts came through, they were not arriving from the Twilight Realm, but rather travelling across Hyrule from one portal to another. After all, this is how Link and Midna can use the portals; as a network connected to each other across Hyrule, but not linked to the Twilight Realm itself. This would mean that the initial invasion of Hyrule Castle represented the only actual crossing (enabled, as Ando indicates, by Ganon's power), and from that "base", Shadow Beasts were dispatched in small units across Hyrule. --Adam (talk) 14:30, 31 January 2008 (EST)

"The inhabitants of twilight, the Twili, are the descendants of dark sorcerers, originally from Hyrule, it seems as if the Twilight Realm and the Mirror of Twilight that led to it were originally made to comprise a prison rather then a parallel world."

I removed this sentence from the article. I got the impression during the talk Midna has with Link before they enter the Arbiter's Grounds (the dialogue beginning with "Wait, Link. Before we go on, there's something I want you to hear.") that the Twilight Realm is a wholly separate world from Hyrule, much like the Sacred Realm is a parallel world of sorts. I'm pretty sure that this quote from Midna just sums it up nicely:

"The Mirror of Twilight, although officially debuting in Twilight Princess, may possibly have appeared in Ocarina of Time as the large round mirror in the Spirit Temple that granted Link access to the chamber of the temple's boss, Twinrova." 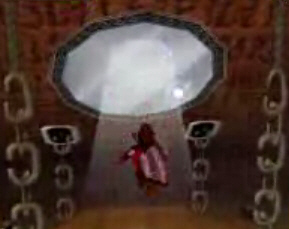 It's an interesting theory, and I assume you mean this mirror:

To me, they don't look strikingly similar; the Mirror of Twilight isn't actually much of a "mirror" at all (i.e. in the reflective sense - it's more of a projector...), whereas the mirror in the Spirit Temple just looks more like a big ol' round bit of glass that reflects light. Am I being overly sceptical? Just seems like the facts are being made to fit the theory, not the other way round... —Adam (talk) 11:33, 8 March 2008 (EST)

It's never stated outright. But most theorists have the Dark Interlopers being banished to the Twilight Realm prior to Ocarina of Time. I'm sure that people who believe that those two mirrors are the same would take this af proof. I don't think they are the same. We may never know when the Mirror of Twilight was made. However, it is a good bet that it was made long before the events of Ocarina of Time.--Matt 19:12, 7 May 2008 (UTC)

I'd like to revisit this if possible. I agree with the original point that the mirrors just don't look very much alike, aside from being circular reflective objects (even then, the Mirror of Twilight, while it is reflective to a degree, is much darker, almost black). Besides that, look at the Arbiter's Grounds: while statues of the Gerudo's desert goddess to appear a few times, I also couldn't help but notice how many depictions of the Triforce and the eagle there were, implying that it was used by the kingdom of Hyrule rather than the Gerudo. It wouldn't really make sense for a band of thieves to imprison and execute criminals from a land they frequently steal from anyway. Jimbo Jambo 19:26, 14 January 2009 (UTC)

I belive the theory is ludicrous. The two mirrors just aren't the same. Its a nice thought, but other than being round objects I see no connection. ~Moshata, The Mistress~ 02:21, 31 January 2009 (UTC)

Writing on the mirror

I just went back and watched the credits, and when it got to the part with the Mirror of Twilight I noticed there were letters in one of the rings, repeating the same word over and over. Anyone know what it says? I couldn't find my hylian->english translator. Onen 15:10, 7 August 2008 (UTC)

Ok, after much hard work, I discovered it says either PQEN over and over or PCQN over and over. No idea what this means though. Onen 15:36, 7 August 2008 (UTC)

I was just thinking about how the article mentions how Midna may return as there may be alternate methods, and I'm sure others have thought of this before, but in a timeline perspective (I'm a splittist by the way), I think she would have to come back, as she still possessed the triforce of knowledge at the end, didn't she?

I think that the Triforce of Knowledge goes back to Zelda from Midna during the battle with Ganondorf. I don't quite remember if it's before or after the Puppet Zelda battle--it ends with the cut scene where Midna looks surprised and looks down at her hands. If I recall correctly, some golden glowy bits come out of Midna--I took this to be the Triforce returning to Zelda. -Bodo, Sage of Obsession 21:18, 5 July 2009 (UTC)