Get some more then! 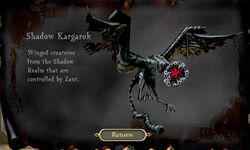 The article uses both the spelling Kargarok and Kargaroc. I don't know which one's right, but it would be good if the whole article used the same spelling.

That's because both are correct. The "c" spelling is used in TWW (shown on it's Nintendo Gallery figurine. The "k" spelling is used on the TP official site on the Shadow Kargarok (thereby inferring that the light world variant is called Kargarok). --Adam 16:14, 4 January 2008 (EST)

On this issue, I think that you have to take into account that the Tingle Tuner is not accessible to most players. In-game spellings should probably take priority, with the Tingle Tuner seen as additional material akin to a Player's Guide. Also, given that the Twilight Princess website went with Karga rather than Kargo, it's probably more accepted in general. That said, I think this page should be moved to Kargaroc (as per a recent Hyrule Castle discussion), as Kargarok is not an in-game spelling, while Kargaroc is. ※Fizzle (talk) 20:54, 4 August 2012 (EDT)