Should we add images of Link in the different games? Like a sprite of Link in his pixalated form in LoZ NES, or a screenshot from twilight princess? --Legosora 16:36, 21 January 2010 (UTC) 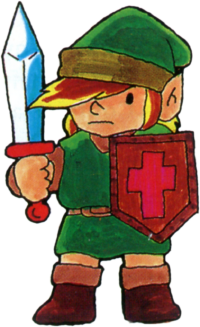 This guy's a righty 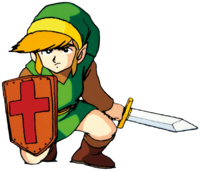 This guy's a lefty

I'd like to note that at least one of the sections does not have the different forms of him. Specifically, there is no Wolf Link picture in the Twilight Princess section. Also, I noticed that there are no images of the separate tunics, aside from Four Swords and Four Swords Adventures. I am unaware why this is (perhaps because there isn't artwork of it), but I thought it would spice the page up a bit. The same goes with Link's copies in Minish Cap. Kyro-Dizzy

I noticed the gallery for Hyrule Warriors has been placed in the non-canon section. Has it been confirmed that the game is non-canon? If not, surely it would be better to place it in the "ambiguously canon appearances" section, or maybe even a "spinoff" section.

From what I can tell, the game doesn't tread on previously-established canon at all, plus it's being produced by Eiji Aonuma. I just think people are a little too quick to disregard a game as "non-canon" these days if it's a spin-off or developed by another team. In any case, the details that have been released so far might even suggest the game has it's own place in the Timeline, possibly in a pre-Minish Cap era. —Conzuh [T|C] 18:58, 22 May 2014 (UTC)

I think we can assume "not part of the main series" means it still might count, just like the new Boba Fett film which isn't one of the main Star Wars films but will still be a canon entry. —Conzuh [T|C] 09:20, 23 May 2014 (UTC)

I believe the standard is to only include artwork and renders/sprites. Press screenshots go on the game page. I've removed the screenshots from the Hyrule Warriors section. - TonyT S C 12:14, 24 May 2014 (UTC)

Hey, I've found some art of Link from the japanese manual of Link's Awakening DX, shouldn't we include that one here as well? 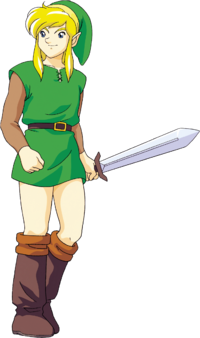 That tree-resting-under art, though created for the 25th anniversary, was meant to go along with LttP, so I think it should go there. Its a remake of the original tree resting art, which I believe is in this gallery. Its in the style of the LttP-FS art, which as well remade old LttP art. We might want to note it, though: As with OoT3D, perhaps a sub-section under it?

Just thought I'd throw my 2 cents in. Sorry.

Yes it's clearly based on ALttP, and even partially resembles the earlier artwork where Link rests under a tree. However, the artwork in question was still created for the 25th anniversary. Earlier it was placed in the section for the GBA remake of ALttP, however the artwork didn't exist at that time and wasn't created for the remake, so it can't be placed there. I placed it under the 25th anniversary section because it was clearly created as promotional artwork for the anniversary. The distinction should be made. - Midoro (T C) 22:32, 2 February 2016 (UTC)

Sure thing. But if we wanted to separate things like that, why are the other remakes placed in a subsection under the original, versus where they belong by publication date? As in, OoT3D art is under OoT, not with SS when it came out. There seems to be inconsistency here. You have creation date taking precedence with the tree art but the original source game taking precedence with the remakes.
JasonBall (talk) 23:55, 2 February 2016 (UTC)

I recall seeing an image of Link braving through a blizzard, and artwork of him and his horse on a cliffside that aren't on the site. Also, while the anniversary artwork is uploaded to the BotW gallery (LoZ NES Link handing the sword over to BotW Link) shouldn't it be here as well? Just some thoughts. Hyrulehero777 (talk) 06:04, 18 March 2017 (UTC)

This might just be me, but I have felt like the character gallery pages on this Wiki have not been organized well. Having artwork, screenshots, models, and sprites all organized by game rather than medium (i.e. a section for "artwork", a section for "screenshots", etc.) never looked right. When I look at photo galleries on my phone or tablet, they are primarily organized without breaks in the middle. I like this because it prevents the breaking of immersion when scrolling through my photos. However, the images on Zelda Wiki are organized by game resulting in several breaks in the gallery that specify the game. In addition, separating certain pieces of artwork into a "non-canon" section makes little sense for a gallery page. Yes, separating canon from non-canon on the main article makes sense, but on a gallery page, all pieces of artwork have equal footing and validity as images. I would like to suggest we completely re-organize the character gallery pages: subsections should be organized by medium, and the individual images within each subsection should be organized by the year they were released. This would follow a model more similar to how galleries are organized on the Super Mario Wiki (here is the page for Luigi to exemplify what I think would be better).

Here is a small preview of how I envision gallery pages would be re-organized. —Preceding unsigned comment added by 101nintendo (talk) 12 July 2017 23:34

Hi, thanks for the idea. Just so you know, the whole categorizing of images is currently being worked on. It's going to (if applied) make galleries automatic and a lot let messy.
Also, don't forget to sign your comments with four tildes (~~~~). Thanks! MannedTooth (talk) 18:26, 16 July 2017 (UTC)

Thank you. It's reassuring to hear that the organization of the gallery pages is being discussed behind the scenes. I feel like Zelda has some of the best artwork and illustrations to come from Nintendo, and organizing them in an easy and intuitive way best ensures others can enjoy it. Making so that the galleries can be updated automatically sounds very promising.101nintendo (talk) 19:26, 16 July 2017 (UTC)