I was just wondering, Jabu-Jabu and Deku Tree were both the patron deities of there place. They protect their speicies. They were dugeons. Dodongo's Cavern fits the last two discriptions. Now, I think It MAY be the patron deity of the Goron's, they are the only Spiritual stone speicies who doesn't have one. Now your probably thinking "How can a CAVE be a patron deity?" Well, I'm SURE you've noticed The huge, about the same size of DT and JJ, inverted (looking into itself) skeleton. 'Fertilising' the stones maybe? And the Gorons said they'd starve AKA die when cut off from it. The same if a Kokiri leves the forest, to far from DT. Also, the hve 2 initials each. DT JJ DC. They were all infested with something (Spders DT Parasites JJ and Dodongos DC) Noticing a pattern? Other than seemingly being a lifeless cave, it fits perfectly. Millionandfourswords 12:26, 18 October 2008 (UTC)

That is a nice little theory you've got going, but this is a factual encyclopaedia, so if you're adding it to the page, be careful about how you address it. I would recommend not, as this theory is more of a personal 'revelation' than a well known theory. {{:User:Melchizedek1866/sig 19:54, 3 March 2009 (UTC)

Hey, there's three different Dodongos fought. The Baby Dodongos, the Dodongos and King Dodongo. However, there was a bigger Dodongo. You have to actually go through its mouth. Emperor Dodongo? And if you look carefully at the ceiling of the main room, you'll notice some rib-like formations. Do we have an Omega Dodongo now? Snakeboss14 23:39, 22 October 2009 (UTC) 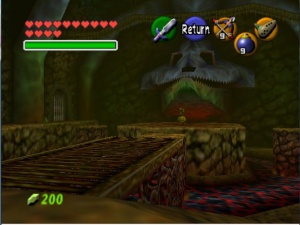 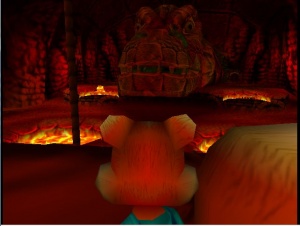 Well then, I've noticed the big similarity with both of the dinosaur structures. In Dodongo's cavern, Link had to bomb each of the Dodongo's eyes to gain entrance inside its mouth. In Bad Fur Day, Conker had to pour pepper into each of the dinosaur's nostrils to gain entrance inside its mouth. Also, a boss can be found past after venturing through the mouth.
The Rock people of Bad Fur Day also have a similarity to the Gorons. The rock people can curl into balls and roll around. They are also found in the area just before the area shown in the game, just like the Gorons were before the Dodongo cavern.
The areas shown in the pictures were blocked by a rock wall. Also, a bomb can be obtained in each of the areas. Both areas have a dinosaur/lava theme to it. RupeeLord(EDN) 01:32, 29 October 2009 (UTC)

Well, maybe something like "Dodongo's Cavern shares several similarities with ..." and the image. User:Snakeboss14/sig

Given that they are both mines utilized by the Gorons and located within Death Mountain, might it be possible (and so worth mention) that Dodongo's Cavern might have become the Goron Mines seen in TP? Setras 20:10, 23 June 2013 (UTC)